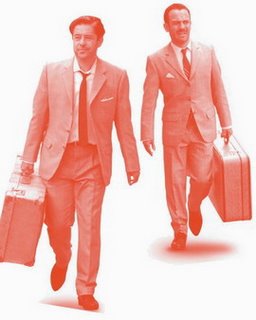 This is going to be something of a rant. So if you don't like rants, move along, there's nothing to see here. Between the anemic ambition of Cine Acción and the unbridled avarice of the International Latino Film Festival (ILFF), what's an aficionado of Latino film supposed to do? Hopefully, focus on the films and ignore the deathdealing invisibility of one and the deathdealing visibility of the other.

So I approached the International Latino Film Festival—their PR director Eric Thomas, to be specific—about how I might help the festival promote its fare on The Evening Class and Twitch. I was told in no uncertain terms that online film critics didn't hold much weight for them. After all, what could we possibly offer them? Could we help secure them big-name big-bucks sponsors like Subaru? Could we provide better coverage than, let's say, the Mercury News or SFGate? Why should they deign to offer press credentials to an online film commentarian when all their large name media sponsors have their own online presence? Because, as Eric insisted, even though the ILFF is a film festival, it's really a BUSINESS. Their goal is to achieve an international profile, which of course they can't do without big sponsors and big names. How could The Evening Class possibly make them attractive to Subaru?

Now, I'm not quite the naïve bumpkin Eric Thomas is assuming I am, I'm fully aware that an international film festival relies on corporate sponsorship to fund its programming objectives. But somehow I took offense when Eric said that—if they were to give me a ticket or two to come to the festival—and that was an if with a capital "I"—they would require that I plug their sponsor Subaru in my write-ups. Now, even if I wish I had been born yesterday, I wasn't, and that not only seems downright manipulative but heedless of my journalistic integrity. I tried to explain to Mr. Thomas that online film commentary is a word-of-mouth resource that shares information about films and festivals between individuals across the country and around the globe. That might be so, Mr. Thomas countered, but we've determined that online film people can't afford our ticket prices and so we can't rely on them for our audiences.

At this point, I felt it was important to talk to this individual face to face. So Eric Thomas offered me the "opportunity" to attend the press conference before the screening of the opening night film. There were the usual personages fashionably dressed in black to either mourn the death of film culture or the birth of big business, I wasn't quite sure which. There was a table with what looked like a Costco party platter, some bottles of water, and a few bottles of wine. Some of the help were already complaining that they didn't have enough wine glasses to serve the guests and were wondering if the Castro staff could supply same. I was introduced to Eric Thomas who pointed to the glaring lights of the t.v. cameras and said, "You see? We really don't need online coverage. We have all this media coverage." I couldn't believe I had been invited only to be insulted to my face. So since this representative of the ILFF had made it sternly clear to me that they had no use for my services, I left.

But since I was already at The Castro, Ninfa Dawson—the reigning champion of festival volunteers—offered me the evening's two films. A kind thing for her to do to compensate me for hauling my ass down there in the first place. We've interacted at so many festivals this last year that it seemed standard course. But even as I sat there in the Castro auditorium, for the first time ever I felt like some kind of interloper; something I have never been made to feel before. But I wanted to observe and here, for the little it's worth, are my observations.

Sylvia Perel, the founder of the festival, has unquestionably gathered together some fine films to premiere here in the Bay Area—and for that she should receive credit—but it's unfortunate that she has to keep crooning, "I love Subaru" on stage in order to get the funding. I would suggest to the ILFF that they take pride in the films they bring to San Francisco and environs and that—if they really want to join the stage of international film festivals—they might figure out how to start their programs on time (they were 30-45 minutes behind schedule), shorten the speeches to their decamisados or just go ahead and run for political office, and give credits to their corporate sponsors without hitting their audiences over the head. Each film last night was preceded by a montage of obnoxious commercials filled with soccer cheers and jiggling boobs. Judging from the hisses and the whistles as last night's audiences sat through the ads and then in darkness while waiting for a film to actually appear, the ILFF might do well to consider that the people who really do make their festival possible year after year are more truthfully not the ad men who drove the Subaru to the front of the Castro, but the audience members hoping to see Latino film.

That's probably about all I'm going to write on ILFF this year (or any year) because—well—by now you know why. And that doesn't mean I won't be going to the festival, because I can certainly afford tickets, or that I won't be writing about the films because that's what I do, but, it won't be under the aegis of the ILFF.
Posted by Michael Guillen at 11/04/2006 04:27:00 PM

Apparently they're showing those commercials at every screening. I attended the noon show yesterday and counted seven, plus the student-made 10th anniversary tribute film. Besides Subaru, there were ads for Macy's, Continental Airlines, Univision, Telefutura, AMC Theaters and 98.9 Estereo Sol. And there were only about 50 people in the enormous Castro Theater, so they obviously could have used some on-line promotion.

On the first day I saw the flyers for this festivalt, I was like, 'Man, Michael will be the perfect resource to find out what to check out.' How shocked I am that you were approached with such unconscionable arrogance, Michael.

As someone who is privileged to be able to afford to buy tickets to 3 or 4 films at ILFF as I was planning, and to arrange to have friends come along with me to each, Eric Thomas's anti-outreach (let's call it "push-away") has now had me tossing my program in the trash. I'll catch these films elsewhere while Thomas is still associated w/ this festival.

I appreciate your support, guys, thanks. Irregardless of my rancor and the publicist's rude cluelessness, it's a pity the films themselves should suffer for lack of attendance. Even though it will be a dvd projection, I might still try to see "The Short Life of Jose Antonio Gutierrez." I was planning to catch "Madeinusa" again, but, will probably pass and catch the Pierson "Dog Day Afternoon" program at PFA instead.

Michael, I finally came across this rant after an extremely busy week. Wow. I've never attended this festival before, and was thinking this might be the year to go. Madeinusa sounds quite intriguing, as do a few others. But I wish I'd been able to catch it at Mill Valley, because reading this makes me want to avoid the festival completely this year and in the future, at least until a decisive change of the festival's direction that you percieved (and based on experience reading your writing, I have complete trust in your perception here) is made.

It seems a shame that such a festival seems to have "defeated" Cine Acción (which I have attended in the past and found quite audience-friendly and un-corporatized) in the sweepstakes to be the region's big showcase of Latino film. I hope that filmmakers considering the submission of their film into the ILFF stumble across this page and use it to help evaluate whether they want to send their films to such a festival, or whether they should consider other festivals in the area first.

Oh, and three cheers for Ninfa.

I'm one of the publicists who worked with you at one of the other (very big) Film Festivals in the City. You have consistently proven to be one of the most professional and highly valued journalists here in San Francisco.

This so-called PR person gives us all a bad name I hope the directors realize that his behavior is wholly unethical and very bad for festivals and publicists throughout the land.

Thanks for exposing such a sad case.

Such kind comments, CL. They made me smile especially in light of the fact that long after this senseless episode, I was approached to vy for the position of ILFF's executive director, which (of course) I wouldn't touch with a ten-foot pole. It now appears that ILFF may have to duck out the limelight this coming year to regroup and figure out how they can keep themselves afloat. I hope they get plenty of coverage on that.