THE THIRD I FILM FESTIVAL—Lineup

Evening Class contributing writer Michael Hawley offers a critical overview and his personal recommendations for The 3rd I Film Festival launching this weekend in San Francisco.

Most people would agree that San Francisco has a fairly sophisticated film culture, perhaps being outshone in this country only by New York and Los Angeles. Unfortunately, it appears we're becoming increasingly less immune to America's phobia for reading subtitles. Case in point: last week there wasn't a single foreign language film in theatrical release here (unless you include The Science of Sleep, which I don't) and this week there's only one, a revival of the 54-year-old Fanfan la Tulipe.

Fortunately, November brings us a trio of festivals to make up for this scarcity: The San Francisco International Latino Film Festival, the San Francisco Film Society's New Italian Cinema series, and the one I'm most looking forward to, the 3rd I Film Festival. Now in its fourth year, 3rd I will present three days worth of films from South Asia and its diaspora at the Yerba Buena Center for the Arts, The Castro Theater and the Roxie Film Center from November 10 to 12. Since I haven't actually seen any of the films in this year's program, I can only comment on the ones I'm most looking forward to, based on the reputations which precede them. 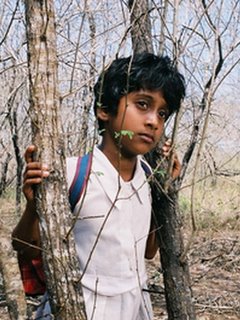 The selection that excited me most when I first looked at the line-up was Vimukthi Jayasundara's Sulanga Enu Pinisa / The Forsaken Land, from Sri Lanka. This film won the Camera d'Or for best first feature film at the 2005 Cannes Film Festival (a prize it shared, incidentally, with Miranda July's You, Me and Everyone We Know), and I had pretty much resigned myself to never being able to see it here in the Bay Area. Described as a meditative examination of the lasting affects of Sri Lanka's long civil war, the film has been praised for its visual poetry and painterly compositions, its dramatic use of landscapes to convey states of mind, and its masterful use of off-screen sound. The festival has obviously made a wise decision in selecting the Castro Theater and its large screen as the venue for this presentation. 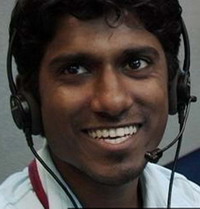 A pair of interesting-sounding documentaries, Bombay Calling and Between the Lines: India's Third Gender will be shown at the Roxie Film Center. The former is a look at the issue of corporate call centers and the outsourcing of that work to India. The film focuses on the young employees who struggle to reconcile traditional Indian values with a Western-style corporate mentality and newly acquired, trendy, fast-paced lifestyles. If you've called any toll-free customer service number in the past few years, you've spoken with these young men and women and I'm looking forward to seeing this portrait of lives and culture in transition. 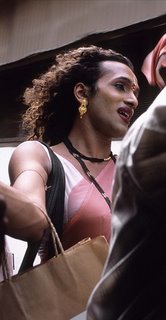 Originally, I wasn't planning to see Between the Lines: India's Third Gender. Over the years I've seen a number of features and documentaries about the hijiras of India (most of them at the Frameline festival), and thus wondered if I really needed to see one more. Between the Lines, however, happens to be photographed and edited by Thomas Riedelsheimer, director of the exquisite Andy Goldsworthy documentary Rivers and Tides. So yes, I do need to see this one, too. Praised by Variety's Jay Weissberg as representing "the best view to date into the world of the Indian eunuch," Between the Lines casts its focus upon three of these marginalized beings as they guide renowned photographer Anita Khemka through their singular world. 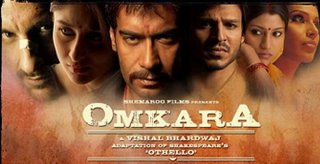 Bollywood old and new is well represented in this year's festival by three selections, recent hits Omkara and Kabhi Alvida Naa Kehna (aka KANK) and the all-time classic Sholay. Omkara is an adaptation of Shakespeare's Othello, reset in modern times against a backdrop of rural gangster warfare. This is director Vishal Bhardwaj's second Shakespearean adaptation (the first was 2003's Maqbool / Macbeth) and it's being described as "art-house Bollywood." I'm not sure what that means, exactly, but I'm looking forward to finding out. Karan Johar's Kabhi Alvida Naa Kehna stars the ubiquitous Shahrukh Khan in a New York-set story about marital infidelity. These two films are being screened back-to-back at the Castro, and if you want to see both it will require a near seven-hour commitment. If you can pick only one and need help choosing, there's an amusing IMdb thread in which some enthusiastic Bollywood fans debate the relative merits of each. 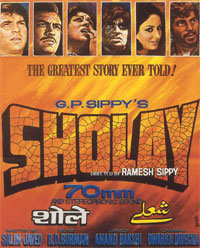 The festival's closing night film is a revival of what is frequently described as the biggest Bollywood blockbuster of all time, 1975's Sholay. This film has been floating around my Netflix queue for years and I'm thrilled that my first exposure to it will be in a theater, in a new 35mm print with the original ending restored (bringing the running time to a whopping 204 minutes!) The term "Curry Western" was invented to describe Sholay's blending of Sergio Leone and Sam Peckinpah's classic films with quintessential Bollywood elements. The film is also noteworthy for having made an international superstar out of Amitabh Bachchan, starring here as a petty crook anti-hero who's hired to capture the bad guy terrorizing a small village. Wikipedia has a lengthy entry for Sholay and here are a few highlights:

• Sholay took 2½ years to film and is the highest grossing Indian film of all time, adjusted for inflation.
• It was considered a box office flop when first released, but soon people were waiting in kilometer-long lines in monsoon rains to buy tickets.
• Sholay ran for 286 consecutive weeks at the Minerva Cinema in Mumbai.
• The film's dialogue became so popular that cassette tapes of it were released, along with those featuring the film's musical score.
• Watching Sholay in theaters became something like a karaoke experience, with audience members reciting dialogues in tandem with the on-screen characters. Some fans had even memorized the sound effects.

And in that spirit, the 3rd I Film Festival is inviting audience members to come dressed in their favorite retro-Sholay attire. This should be enormous fun and one of the Bay Area's movie-going highlights of 2006!

For the complete festival line-up and additional film descriptions, please visit the 3rd I website. 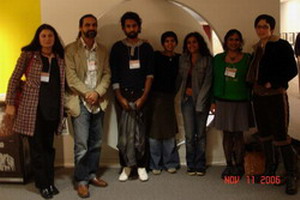 11/12/06 UPDATE: Opening night for the SFISAFF at the Yerba Buena Center for the Arts was a sold-out event, with enthusiasts even sitting on the edge of the stage. Seema Aurora advises the event was heartwarming and has sent along this photograph she took of the young directors in attendance. (l-r) Alka Raguram (The Ant and The Monkey), Saqib Mausoof (Hansot By The Bay), Runjan Dhar (Loops & "MuZak"), Neshma or Single Beige Female (My Beige Foot), Tania Chattopadhyay (The Flight), Kirthi Nath & Amanda Davidson (Come on, Big Empty).

The Saturday crowds for Bollywood at the Castro were likewise large and excited, cheering when their favorite idols appeared on screen. I'm looking forward to today's afternoon documentaries capped off by Sholay.
Posted by Michael Guillen at 11/07/2006 10:20:00 AM

Email ThisBlogThis!Share to TwitterShare to FacebookShare to Pinterest
Labels: 3rd i, Michael Hawley

Thank you for your thoughts and recommendations. And I hope you like Sholay. It is well worth the watch. :)

As a big fan of Asian Dub Foundation (including their pre-Dub days as Dysfunctional), I am sooooo looking forward to the opener!

Correction - ADF's Pre-Dub days were as Fun-Da-Mental, not Dysfunctional, which I think I was getting confused w/ an old Consolidated track, 'Dysfunctional Relationship'. Anyway . . .

I remain dysfunctionally confused, at your service. 8^)