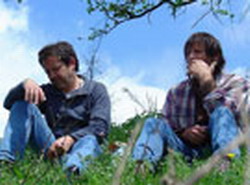 This old saying bookends and entitles one of the notable entries among the seven films competing for best new narrative feature at this year's New Italian Cinema; Giorgio Diritti's Il vento fa il suo giro / The Wind Blows Round.

The Wind Blows Round is an unexpectedly absorbing pastoral drama flecked with calm and humorous observations about everyday life in a tiny, remote (imaginary) village named Chersogno, set in Northern Italy near the French border where an old dialect known as Occitan (aka langue d'oc) is still spoken by the elderly. The film affords a rare opportunity to hear this ancient tongue, a blend between Italian and French. (Incidentally, Gascon—which is related to Occitan—is the language with which, according to the testimony of Bernadette Soubirous, the Virgin Mary spoke to her at Lourdes.)

Though its dramatic structure is minimal, the film achieves interest through its attentive cinematography of achingly stark Alpine landscapes, which are so breathtaking they counter the limits of the digital camera used to film them. The story is populated with non-actors who lend naturalistic vigor to the film and, as Cinematical's Martha Fischer states it, a notable "lack of contrivance." She expands that "[t]he characters are presented, warts and all, free of cinematic flourishes and neat Hollywood salvation." The story's simplicity yields to the poignant and the profound because it addresses a continuing, ageold tension between the effect of modernity upon agrarian communities, not so much through encroachment as through the abandonment and depopulation of remote villages by bored youth and exhausted elders forsaking traditional ways to pursue modern lives in urban centers. As a consequence, a kind of stubborn inflexibility takes over those few left behind in the village like rigormortis taking over a corpse.

Trying to revive the dying village, its mayor seeks to exoticize its pastoral assets to turn it into a tourist draw. When a French family relocates to Chersogno to raise goats and make cheese, he thinks they are perfect candidates and helps facilitate their relocation. Initially they are welcomed but then gradually and methodically resisted through xenophobic resentment and, ironically enough, an adamant refusal to return to more traditional ways of animal husbandry. It's as if the remaining inhabitants of Chersogno out of conservative fear wish to move neither forward nor backward and—as a consequence—life stagnates.

Philippe Heraud (Thierry Toscan) is a freespirited thinker who has turned to an older way of life to escape the illness of modern concerns. At first Chersogno seems an ideal place for he and his family to relocate, so far away from people, empty most of the year, with ample grass pastures to feed his goats. But all too soon miserly neighbors would rather their fields lie fallow than allow Philippe's goats to graze upon them. Philippe—interpreting their territoriality to be ridiculous—underestimates the murderous lengths they will go to keep him and his goats out. Vengeance, they say, moves on quick feet and in a final scene as Philippe rushes to confront his oppressors, he achieves insight and what could have turned into continued slaughter is swallowed whole, imploded. Philippe makes a separate decision that ennobles him and consigns the remaining villagers in Chersogno to the folly of their own enforced isolationism. They have forsaken the principles upon which their village was founded, principles recounted towards film's end by the oldest member of the village who—having moved away some years before—returns to visit Chersogno and recalls that living in the mountains was never easy and that the most important thing was haymaking. Hay was more important than bread because it was fed to their animals, who could then furnish them milk, butter and cheese. During the war when the Germans began burning down the haylofts in the valley, the mountain villagers decided to hide their hay in the local church. The boys would then sneak into the church and take out whatever hay was needed for the farmers to survive. They all tried to help each other and came up with the rucido, a ritual procession of the hay to and from the church that underscored their cooperative mutuality. Forsaking this principle of mutual cooperation is what the film suggests has killed the village, moreso than the demographic shifts away to nearby Turin.

"The tone does darken somewhat in the final act," Neil Young writes at his film site, "before a brief coda provides an unexpected, welcome and believable spark of optimism", which is, namely, the return to these values by the youngest member left in the village.

Sweet! This is the one film I've been able to work into my schedule to see at the New Italian Cinema Series before work sends me out of the country for a couple months. Sounds like it's the right one too. Thanks for the post Micheal, I'll read past the first three paragraphs after I see it, but if you give it a proverbial thumbs up, I feel good about my choice.

I think it's worth seeing, sure. It's gorgeously filmed and it's like looking through a window into a vanishing world.