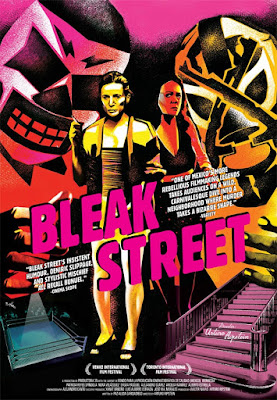 I imagine Diane Arbus and Luis Buñuel sharing stale popcorn sitting third row center watching Arturo Ripstein's latest melodrama La Calle de la Amargura (Bleak Street, 2015). Billed variously as a "Mexican noir" and a "true crime film", Bleak Street was inspired by a nota roja read by long-time Ripstein collaborator (and lifetime companion) Paz Alicia Garciadiego. She transformed the sordid tabloid events of an accidental 2009 homicide of two dwarf luchadores in a Cuauhtémoc love hotel by two middle-aged prostitutes into a quintessential Ripsteinian netherpiece, which succeeds as a welcome return to form from Ripstein whose recent films have not quite captured the imagination of the public as avidly as his earlier works.

Bleak Street had its World Premiere at the 2015 Venice Film Festival, then Toronto, Morelia and Gijón (where it scored the Best Director Award for Ripstein and Best Production Design for Marisa Pecanins). David Hudson rounded up the first reviews from Venice and Toronto for Fandor's Keyframe Daily, with Critics Round-up following suit. 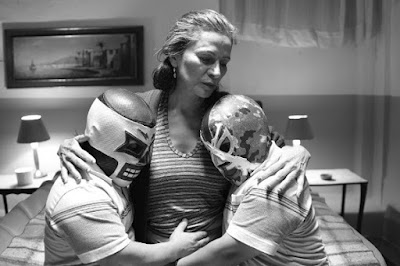 Garciadiego's script ingeniously emulates the grotesque reflections of funhouse mirrors through an intricate replication of the twinning and doubling of characters, starting straightaway with the masked dwarves Little Death (Juan Francisco Longoria) and Little K-9 (Guillermo López), the shadow mascots and diminished reflections of luchadores Death and K-9. The dwarf twins are managed by alcoholic parents who exploit them mercilessly. Their mother Doa Epi (Silvia Pasquel) is especially manipulative, using a fierce, unyielding mother love and the threatening blessings of Christian prayer to twist their minds into obedience, when all they really ask for is that their costumes be made of respectable material and that they be given a little allowance for a night of hanky-panky. Once again, Ripstein reveals how familial obligations are, perhaps, the most confining prison of all, moreso than the immovable barriers of class and economic circumstance. 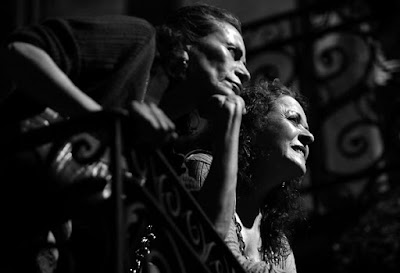 So it is, as well, for the film's parallel protagonists, the used-up prostitutes Adela (Patricia Reyes Spíndola) and Dora (Nora Velázquez). Adela accepts being saddled with a crippled mother as meager compensation for her agonizing loneliness, and she puts the old bat to good use, having learned that strangers offer loose change to absolve themselves of the guilt they feel confronted by an old woman begging. Senior abuse has rarely been depicted so mordantly. Her friend Dora, on the other hand, is under the resentful thumb of her sluttish daughter and her cross-dressing husband Max (Alejandro Suárez), which upsets her only because Max is ruining her work clothes by stretching them out when he uses them to flirt with young men. Other than for that, she's willing to put up with his homosexuality just to maintain an illusion that she leads as normal a life as her condescending neighbors. But Max is fed up with having sex forced upon him in Dora's bid for normalcy and runs away under the cover of wide-eyed darkness with Dora's meager savings (and her best lingerie). 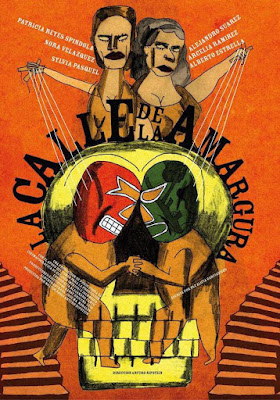 It is only in their friendship that Adela and Dora find any relief, even as they labor to find one shaft of sunlight where they can sit and remember the fun they had as young prostitutes drugging men and stealing their money. Although Alejandro Cantú's atmospheric and sullied palette is 180º away from that used in Sean Baker's oversaturated Tangerine, the honesty of the love and friendship between Tangerine's transgendered duo resonates with the shared street experiences of Adela and Dora, emphasizing a kind of love that is, perhaps, unknowable if unthinkable to those with a touch more light and a little less street in their lives. The tenderness of Dora rubbing a little rouge on Adela's high cheekbones emphasizes her heartfelt flattery that Adela looks just like Dolores del Rio. "Do you really think so?" Adela questions demurely, for one fleeting moment young again. Cinematographer Cantú, in no small measure, is wholly responsible for the film's oppressive yet engaging ambiance. Combined with Marisa Pecanins' production design, Bleak Street's grimy world is shadowy with faint overhead light, dirty puddled streets, and the everyday decasia of crumbling walls and mildewed plaster. His camera eavesdrops furtively. It holds back at a distance in wary long shots, then advances floatingly as if to overhear the gossip more clearly and to more fully witness the sordid events taking place. 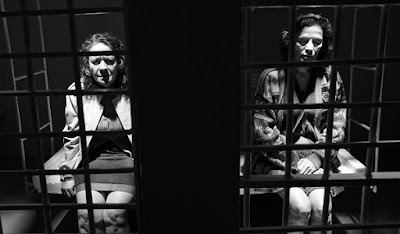 Eschewing sentimentality, Bleak Street does not, however, suffer from a lack of compassion or begrudged respect. As miserable as the lives of its criminal cast of characters might appear, as wanton their desires or forlorn their hopes, their fatefully flawed humanity lifts its weary chin momentarily recalling a near-forgotten sovereignty, even if limned with dark, smudged charcoal in waning light. There's too much love in Ripstein's portrait to accuse him of mere miserabilism. Life is far too messy and complicated for that. The flamboyant codes inscribed in his melodramas reveal these denizens of the dark as heroes defiantly resisting the overwhelming odds of a world set against them, even if it is all—as Adela seeks to comfort Dora at film's end—meant to pass away. As if to prove a point, Luis Mariano's "Mexico" sung in French over the film's closing credits offers a contrapuntal jubilance.

Bleak Street is currently screening at the Landmark Opera Plaza in San Francisco and the Landmark Shattuck in Berkeley.