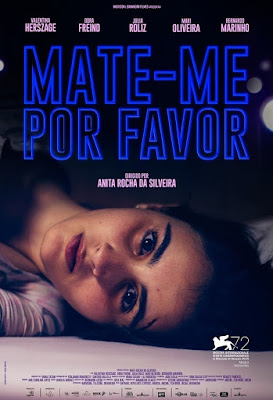 Selected for the Horizons section of the 2015 Venice Film Festival, Mate-me por favor concerns a wave of murders in Barra da Tijuca, the West Side Zone of Rio de Janeiro. What starts off as a morbid curiosity for the local youth slowly begins to spoil away at their lives. Among them is Bia (Valentina Herszage), a fifteen year old girl who—after an encounter with death—will do anything to make sure she's alive. Da Silveira explains this morbid premise as follows: "Mate-me por favor was inspired through memories and emotions experienced during my teenage years. The discovery of love and sex greatly resembled my first encounter with death: the fear and fascination of knowing my life didn't really belong to me and the will to live in an extreme state between possibility and the impossible. Intensified, these sentiments became the basis of creating a distinct universe. Uncontrolled and without mentorship, the youth test their limits to the same extent in which they fear, fantasize and fall in love. The chosen arena is Barra da Tijuca, a newly developed and brutal space—much like my characters and a killer who haunts and slowly tarnishes their neighborhood." 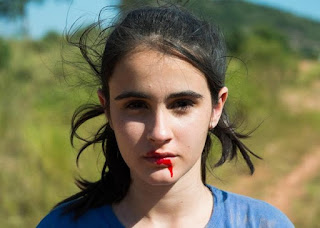 With Mate-me por favor, Variety's John Hopewell observes that Da Silveira emerges as "one of the new faces of Latin American cinema." Part of a growing trend of pan-regional co-production, Mate-me proceeds by "skewering the New Brazilian dream" while being a "half serial killer suspenser" as well as "a coming of age dramedy." At The Hollywood Reporter, Jonathan Holland is concerned that the film "packages its horrors too neatly into beautiful images" even as it advances the "pretty cool premise that there's a darker psychological side behind the perfect sheen of a privileged teen life."

There's no question that Mate-me por favor wears its shocks wickedly and smartly. It's a quite sexy, if oppressively mordant, portrait of young Tijucan adolescents on the edge of Rio de Janeiro who would rather literally die at the hands of a serial killer than be bored to death in their privileged lives. For a first feature, it exhibits considerable skill in paying homage to American genre films that conflate teenage sexuality with misdirected suicidal ideation. 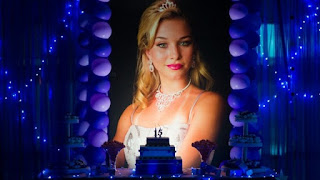 Da Silveira negotiates her genre tropes cleverly, particularly in showing how youth culture is sexualized by popular media. Nothing is worse than watching everyone else make out when you don't have anyone to make out with. The film's musical sequences emulate MTV videos, and are particularly funny during an evangelical Christian fellowship meeting where the resident "minister" turns worshipping Jesus into something this side of a rape fantasy. No wonder these kids are confused.

Da Silveira's stylistic promise comes off the rails a bit towards film's end as she stretches believability; but the final scene critiques how many young people would rather die than live a life of boredom and, as a consequence, become a host of ghosts vanishing at dawn. It's a somewhat forced and tagged-on ending, yet not without an eerie poignance.

After Venice, Mate-me por favor went on to win prizes at Rio, screened at FICCI56, then had its U.S. premiere at New York's New Directors / New Films, where Michael Snydel's review for The Film Stage appreciated that the film's possibly gratuitous premise "remains grounded thanks to a perspective that always places the girls' lives first. Even when murders happen, they're shrouded within hazy editing that presents the killing like a lost fever dream. In the prime period of sexuality, they're alternately terrified and aroused by the idea of these women being raped and murdered, and each reacts differently, whether it's clinging to the church, receding into their own mind, or becoming more impulsive." Snydel concludes that Mate-me por favor "is remarkably accomplished for a debut feature despite feeling a little bit muddled in terms of rhythms and especially its ending, which tips its hat a little bit too hard to art-horror ponderousness. Still, it's a vibrant debut that demonstrates that Silveira has a strong talent for depicting adolescence and its attendant horrors."
Posted by Michael Guillen at 3/28/2016 02:03:00 PM