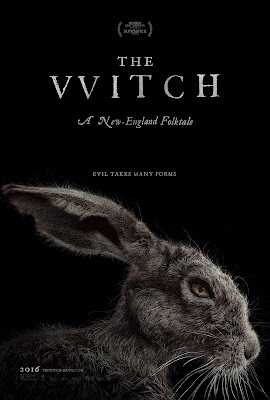 Opening this week at the Alamo Drafthouse San Francisco, Robert Eggars' The Witch (2015)—winner of the Directing Award at last year's Sundance—situates its cautionary tale among a Puritan family in 17th century New England wilderness, achieving verisimilitude through Jarin Blaschke's moody, intimate cinematography desaturated of color—arguably true to a de-sensualized Puritan imperative—that instantly immerses you in another time and place. Especially noteworthy is that the film pre-dates Salem's notorious witch hunts to a time when the advance of evil has not yet become articulated; when the threat of witches lies nascent.

Then there is the impenetrable English, adapted from historical records of the period. What are they saying? And then the gradual realization that the film finds its narrative traction less in dialogue and more in depiction, through visual foreboding and emotive transparency. An overwhelming feeling of dread edges you forward to the film's final foray into the dark, betwitched forest.

Blade on the babe. Blood in the milk. Ram, raven, hare. Genre elevates to the tips of the trees.