To help celebrate their first year in their new venue, Pacific Film Archive programmers Susan Oxtoby and Kathy Geritz are curating a year-long series "Cinema Mon Amour", in which invited guests share and discuss favorite films. As part of his participation with the series, Guy Maddin recently introduced the Quay Brothers' short film Street of Crocodiles (1986), which Michael Atkinson (The Village Voice) has described as "the most sublime piece of frame-by-frame filmmaking yet accomplished."

In her introduction, Senior Programmer Susan Oxtoby relayed: "Guy Maddin's work throughout his career has allowed him to delve into the world of film archives to draw on the history of cinema in his own beautiful films and then to be a thoughtful commentator on why he loves the films that he loves. ...In the past year Guy's been teaching at Harvard University as a lecturer in the Visual and Environmental Studies Department, teaching students filmmaking."

I know the Brothers Quay personally. They're hilarious. They're unbelievably charismatic. They're twin brothers from Philadelphia, but have been in London since the late '70s. Like twins in horror movies, they finish each others' sentences and have weird psychic connections with each other. They're always getting involved in triangles and quadrangles and all sorts of odd things.

Some of you might be familiar with their work but you will quickly see how visually dense it is. When you visit them at their studio in their home, they have beds in their studio, which is exactly like their movies. You're really on their turf. There's a home field advantage to being in the Quay Brothers' studio. 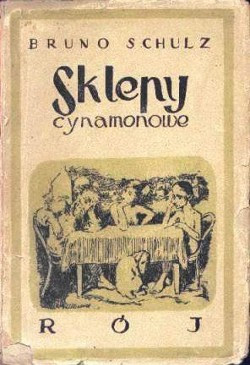 I first heard of them in one of those horrifying moments. My favorite author for decades now has been Bruno Schulz, the author of the short stories The Street of Crocodiles (1934). Bruno Schulz is practically the reason I wanted to make films. I didn't make my first film until I was 29 years old; it was a short movie. I was hoping that at the end of 10-15 years of filmmaking to be good enough to be able to make a Bruno Schulz adaptation. What I love about Bruno Schulz is he can take childhood memories and make the experience of remembering your own childhood really come alive on the page. It's something I think only literature can really do, or poetry, but I thought, "Well, this is a lofty goal but I'm obsessed with my childhood memories for some reason." This was in my late twenties so it was still recent enough that I could remember them but remember them just unreliably enough to get high off the fumes of my unreliable memories.

So I had this vague plan to get better and better until somehow I could make a film that would be like what Bruno Schulz did on the page. The next thing I know, my screenwriter / collaborator George Toles called me to say, "Have you heard that The Street of Crocodiles is now a movie?" He was all excited but I was like, "No! My entire future is gone!" It was advertised to play on PBS that night so I watched it quickly, full of hatred, dying to hate the movie and to hate whoever made it. But it ended up being one of those things where the film was just so great that my feelings went beyond jealousy. Fortunately. Also, it turned out that the Quay Brothers were stop-action animators and I wasn't hoping to become one of those crazy people. 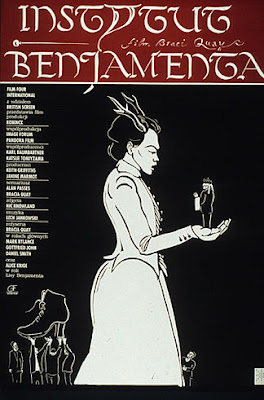 Also, their take on Schulz was so different that mine, but equally intoxicating so there were no turf wars between us. It was just a matter of my next step being an effort to meet these people. I had read a lot of interviews with them so I knew we loved the same authors. Another goal of mine was to make a film based on Robert Walser's novel Jakob von Gunten (1909), which the Brothers Quay promptly made as well as Institute Benjamenta (1996); this one with actors. Anyway, I had to meet them and start negotiating the parceling out of adaptations.

They've done things since 1986 that other filmmakers still haven't done. There's so much rack focusing. The camera never stops moving. They pride themselves on recycling junk. I remember them being disgusted with how much Tim Burton apparently spent to design the doll that stars in The Nightmare Before Christmas (1993); something like $200,000 to build it. They found the rudiments of the star of Street of Crocodiles in the garbage somewhere and just fixed him up a bit. What they do with the refuse of the world is really beautiful. There are just so many planes of interest and focus. They think of the possibilities of the film world so differently.

They are animators so they do tend to start with music. Lech Jankowski, their long-time collaborator, is apparently very crusty. They're always hammering out deals with him that include horrible arguments; but, he reads their script and then supplies them with music and then they animate to his music.

Of related interest, Fandor has published a few articles on the Brothers Quay, including both Jonathan Marlow's interview with Stephen and Timothy Quay and Shade Rupe's interview, as well as Joel Bocko's film essay Manufacturing Dreams (2015). Several of the Brothers Quay's films are available for streaming on Fandor, including Street of Crocodiles. Also of note would be Sarah Scott's Senses of Cinema essay "Fetish, Filth and Childhood: Walking down The Street of Crocodiles" and James Fiumara's Kinoeye essay "The Thirteenth Freak Month: The influence of Bruno Schulz on the Brothers Quay."
Posted by Michael Guillen at 2/20/2016 11:11:00 AM