The Mill Valley Film Festival (MVFF) is perhaps best known as a showcase for indie-ish Telluride / Toronto movies making their autumnal trudge towards Awards Season glory. For its 38th edition running October 8 to 18, MVFF bookends itself with Tom Hooper's The Danish Girl (starring Eddie Redmayne, who trekked to Marin County last year hawking The Theory of Everything) and Sarah Gavron's Suffragette (whose lead actress Carey Mulligan will be fêted with a MVFF Spotlight tribute). Toronto's People's Choice Award winner Room will also be in the house, with star Brie Larson receiving a MVFF Award "in recognition of courageous work in a career-changing role."

MVFF's winning formula of mixing red carpet awards bait with indies, documentaries and discoveries from second-tier international fests has been enhanced in recent years by an uptick in big buzz, art-cinema breakouts from major festivals like Berlin and Cannes. This year's line-up boasts an inordinate number of works culled from those two events, including nearly all of the top prizewinners. It's a bonanza for Bay Area lovers of international art cinema and the focus of this subjective overview of the festival's 2015 roster. 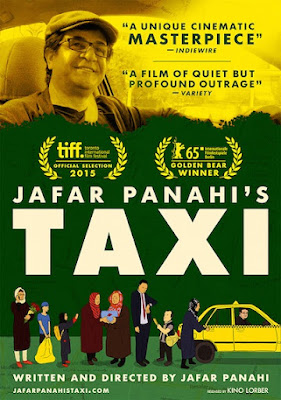 This year's Berlinale bestowed the Golden Bear upon Jafar Panahi's Taxi, the director's third clandestine effort since being banned from filmmaking by the Iranian government in 2010. As with This is Not a Film and Closed Curtain, Panahi dares to place himself in front of the camera, this time posing as an inept Tehran taxi driver. The film skates a sketchy line between reality and fiction as his "chance" encounters with passengers are recorded by his vehicle's dash cam. Panahi's fares run the gamut from a bloodied accident victim imploring him to film a last will and testament, to two grumpy grannies transporting a goldfish to a sacred spring. He fetches a precocious niece from school (where she's studying filmmaking, natch). These meet-ups obliquely comment upon movie-making, censorship, Iranian social issues and Panahi's own quasi-celebrity. Iranian cinema devotees will also appreciate how he winks at his filmography (the goldfish from The White Balloon) and that of other Iranian directors (Abbas Kiarostami's similarly structured Ten). If you're unable to catch either of MFFF38's two Taxi screenings, it opens theatrically in the Bay Area on October 30. 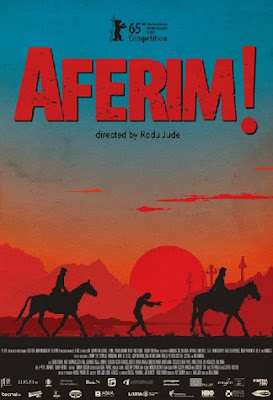 Of the half-dozen MVFF selections I previewed, my favorite was Radu Jude's Aferim! which also copped Berlin's Silver Bear for Best Director. The Romanian filmmaker's two previous works, The Happiest Girl in the World and Everybody in Our Family seemed to make an impression on the international festival circuit but never reached the Bay Area. Jude's latest is a road movie cum neo-Western set in 1835 Wallachia, an area of modern-day Romania alternately controlled by Russians and Ottomans. In this entertaining and engrossing historical tale, a brusque constable and his teenage son are charged with capturing an escaped Roma slave and returning him to his evil boyar master. Featuring impressive period art direction and finely drawn characters, Aferim! is an arresting look at a long gone era's mores and customs, as well as an eye-opening portrait of slavery and anti-Jewish / Roma sentiment in 19th century Europe. It also boasts stunning B&W wide-screen cinematography shot on 35mm by DP Marius Panduru (12:08 East of Bucharest, Police, Adjective) and should therefore be experienced on as large a screen as possible. 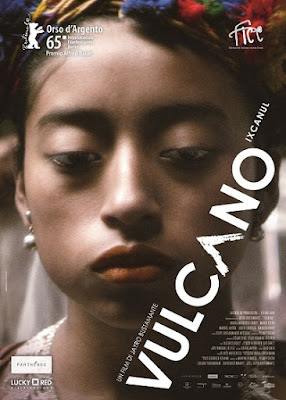 Three additional MVFF38 selections garnered major prizes at Berlin. For their work in 45 Years by Andrew Haigh (Weekend, HBO's Looking), Charlotte Rampling and Tom Courtenay took home both acting awards for this character-driven drama about a long-married couple reevaluating their relationship. Berlin's 2015 Grand Jury Prize was awarded to Chilean director Pablo Larraín's The Club. In this follow-up chamber drama to 2012's Oscar®-nominated No, a Catholic crisis counselor is sent to a beach town retirement home for disgraced priests and nuns. Unfortunately, The Club is one of several enticing MVFF entries not screening at the Smith Rafael Film Center, the only venue readily accessible by public transportation. Finally, the fest will also present Jayro Bustamente's Ixcanul, winner of the prestigious Alfred Bauer Prize given each year to a movie that "opens new perspectives on cinematic arts" (past winners include Lucrecia Martel's La Ciénaga, Fernando Eimbcke's Lake Tahoe and Miguel Gomes' Tabu). Set in a community of coffee harvesters living at the foot of a Guatemalan volcano, Ixcanul has been named that country's first ever submission for Best Foreign Language Film Oscar® consideration. 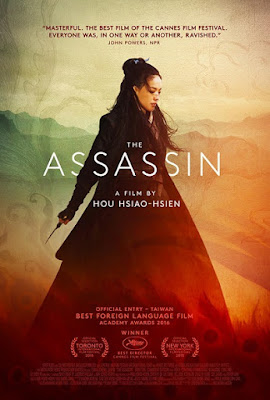 As it did last year, MVFF will screen an impressive seven selections from Cannes' main competition, including several major prize winners. Starting at the top there's Jacques Audiard's Palme d'Or winning Dheepan, a searing drama about three Sri Lankan refugees struggling in a Paris housing project. The film was a controversial choice for Cannes' top prize, with many film writers and critics feeling the award more deservedly belonged to first-time Hungarian director Laszlo Nemes' Son of Saul. An intense holocaust drama set in Auschwitz during the final days of WWII, Son of Saul did win Cannes' Grand Prix (or second place) and will appear at MVFF38 as well. Cannes' Best Director prize went to Taiwanese master Hou Hsiou-hsien's The Assassin, a visually sumptuous 9th century martial arts epic. In addition to screening at Mill Valley, Hou's first film in eight years will play the San Francisco Film Society's Taiwan Film Days on October 12, with the director making an exclusive appearance (which is where I plan to see it). It also arrives in Bay Area theatres on October 23. 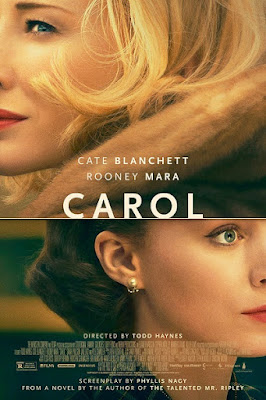 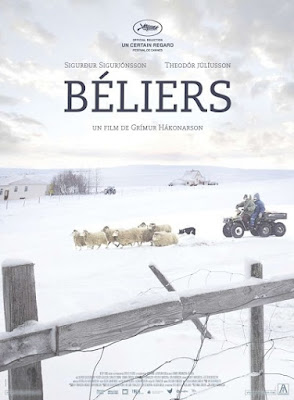 It seemed the consensus of many who attended this year's Cannes that the true cinematic revelations were to be found outside the main competition. Happily for MVFF38 attendees, the festival has lined up a promising selection from Cannes' sidebars. From Un Certain Regard I can heartily recommend Grímur Hákonarson's Rams, an affecting tale from Iceland that won the sidebar's top award. The story focuses on two sheep-ranching brothers who haven't spoken in 40 years, despite living right next door in a desolate valley. When disease strikes and they're ordered to destroy prized livestock, the two begrudgingly unite to preserve a family legacy. An abrupt ending had me wondering if the final reel had gone missing. Rams unfolds at a measured pace, is not without humor, and features breathtaking cinematography from Sturla Brandth Grøvlen (who also filmed the bravura, shot-in-one-take Victoria, a big hit from Berlin which opens in the Bay Area on October 16). 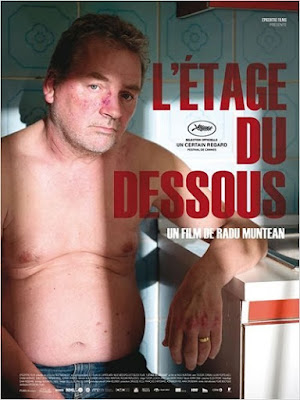 Another rewarding Un Certain Regard selection I previewed was Radu Mutean's One Floor Below. While the director's The Paper Will Be Blue screened at MVFF in 2007, his two lauded follow-ups, Summer Holiday and Tuesday, After Christmas went unseen in the Bay Area (like so much of the New Romanian Cinema canon—hurrah for Netflix where I ultimately caught up with both). Muntean's latest is a wide-screen, slow-burner that places its protagonist at the center of a moral quandary. A middle-aged family man who works "expediting" motor vehicle registrations returns home one day and overhears what turns out to be the murder of his downstairs neighbor. He knows who the culprit is, and the culprit knows he knows—yet when the police investigate he says nothing. The film becomes unbearably discomforting as the culprit, who is also a neighbor, insinuates himself into the private life of our protagonist. Eventually, of course, it all has to explode. Be prepared for a head-scratcher of an ending and much screen time hanging out at a Romanian DMV. 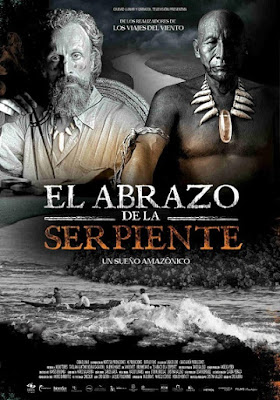 Shifting over to Cannes' Director's Fortnight, MVFF38 has programmed that sidebar's top prize winner as well. Ciro Guerra's Embrace of the Serpent employs a bifurcated structure to deliver a meditative critique on the destruction of indigenous cultures (in this case, Amazonian) by colonialist forces. As an admirer of Guerra's The Wind Journeys, which screened at the 2010 SF International Film Festival, this is something I'm greatly anticipating. Another breakout hit from Director's Fortnight was Deniz Gamze Ergüven's Mustang, in which five Turkish sisters pay a severe price for an afternoon's innocent cavorting with teenage boys. The film won the sidebar's Europa Cinemas Label Award and curiously enough was just announced as France's submission for this year's Oscar® race (it's a French / German / Turkish co-production). Other Director's Fortnight selections include Colombian child soldier drama Alias Maria, and A Perfect Day, a black comedy set during the Bosnian War starring Tim Robbins and Benicio Del Toro. Finally, from Cannes' Critics Week sidebar I've read great things about Jonas Carpignano's Mediterranea, a verité-style docu-drama about Burkinabe immigrants working the orange groves of Italy. 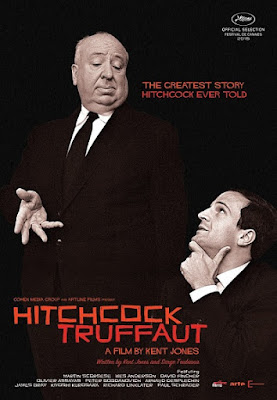 Each year the Cannes Classics sidebar premieres restorations of iconic films, as well as recent documentaries about the personalities and craft of movie-making. MVFF38 presents three Cannes Classics docs from this year's edition, including Ingrid Berman: In Her Own Words and Sembene! The latter examines the life and career of revered Senegalese director Ousmane Sembene, laurelled as the Father of African Cinema. In conjunction with Sembene!, the fest will also show the filmmaker's groundbreaking debut feature, 1966's Black Girl. The third doc, which I previewed and immensely enjoyed is Kent Jones' Hitchcock / Truffaut. The film explores the ramifications of François Truffaut's legendary eight-day 1962 interview with Alfred Hitchcock that became the basis for one of cinema's indispensible guidebooks. Jones mingles dozens of movie clips with commentary from an eclectic group of contemporary directors ranging from Kiyoshi Kurosawa to Wes Anderson to Olivier Assayas. Best of all is getting to hear snippets from the actual tapes of Truffaut and Hitch conversing through a translator. If you can't see this at Mill Valley, hold on until December 11 when Hitchcock / Truffaut arrives in Bay Area theatres. 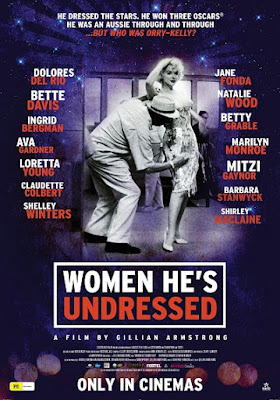 Although it didn't screen at Cannes, another movie-related doc worth seeing at MVFF is Women He's Undressed by Australian filmmaker Gillian Armstrong (My Brilliant Career). Her film explores the considerable highs and lows of Hollywood costume designer Orry-Kelly, a fellow Aussie who arrived in NYC in 1922 and worked on 285 films for Warner Brothers, Fox and MGM until his death in 1964. Remember Bette Davis' "red" dress in Jezebel? Barbara Stanwyck's costume changes as she slept her way to the top in Baby Face? Bergman and Bogie in Casablanca? Jack Lemmon and Tony Curtis' drag in Some Like It Hot? Roz Russell's outrageous frocks in Auntie Mame? They were all designed by three-time Oscar® winner Orry-Kelly. The film's title is misleading as the man was quite gay and Women He's Undressed has a lot to say about LGBT life in studio-era Hollywood (particularly regarding Cary Grant, an intimate "roommate" of Kelly's long before Randolph Scott came along). Armstrong's doc moves briskly, combining loads of clips and stills with contemporary interviews of Leonard Maltin, designer Colleen Atwood, Angela Lansbury and a particularly salient Jane Fonda (whom Kelly dressed in her early works like The Chapman Report and Sunday in New York). The film's only drawback is several ill-considered sequences in which an actor portraying Kelly floats around in a rowboat making pithy remarks about his own life. Otherwise Women He's Undressed is pure catnip for lovers of classic Hollywood movies.