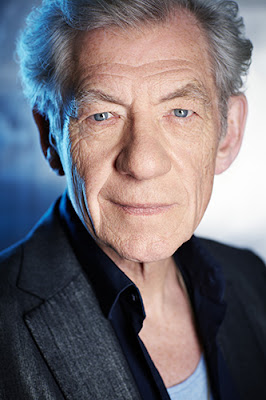 Without question, Sir Ian McKellen is one of the most beloved actors of many generations. When I mentioned to him at a recent San Francisco Film Critics Circle reception that I was amazed how my youthful friends in their late teens and early twenties were as excited as my 60-year-old friends that I was being offered the chance to meet him, it underscored how his appeal has attracted a fan base that stretches out in all directions. "That is something, isn't it?" he responded. I was especially heartened to be afforded an opportunity to express my gratitude for how much he has done for LBGTQ youth. For this, Sir Ian embraced me.

Fêted with a Lifetime Achievement Award at the 38th edition of the Mill Valley Film Festival, McKellen accepted his bronze award from his lifetime friend Armistead Maupin and regaled his audience with lively anecdotes regarding his career and willingly fielded questions from his audience. Never one to miss an opportunity, I swiftly raised my hand.

Michael Guillén: There seems to be a tendency in Hollywood right now to honor straight actors who play gay roles and yet—if queer actors try to portray themselves—they're not honored and, often, their careers are placed in jeopardy. You, however, are a tremendous exception to that practice. Can you speak to that?

Sir Ian McKellen: When I first came out, some long-time gay actors assumed that I would now turn myself into a queer artist and that I would stop playing the sort of parts I was playing and just concentrate on gay-related plays and films. I said, "No! I can't. I find heterosexuality is far too interesting a phenomenon to be ignored. [Audience laughter.] I couldn't stop playing King Lear. There's nothing queer about Lear! [More laughter.]

So, I don't get angry when Tom Hanks brilliantly plays a gay man in Philadelphia. I don't say all gay parts should be played by gay actors because, if so, I wouldn't be allowed to play straight parts. Ultimately, we're just actors.

What was wonderful about Gods and Monsters was that I think it was one of the first films to actually take a gay character and treat him with the same respect (and lack of respect) as might have been done had James Whale been straight. It just happened to be about the man, who happened to be gay and had particular problems, but the film took him honorably as himself. Thus, historically, that movie's very important and I hope the industry's moved on since then, but I'm afraid no one looks to Hollywood for social advancement, do they? Hollywood can be a little bit behind the times, which is odd in this state, which is so far ahead of the times than other states. It's an odd thing.

Also, there are young actors being advised by agents, etc., to stay in the closet and to not be themselves because it might damage their careers and yet on the other side of the continent in New York people are picking up Tony Awards and thanking their lovers of the same gender. So there is a bit of a cultural divide in this great nation.

Well, there's lots more to be said about it but I hope that the time has arisen when we can all be ourselves and declare ourselves and understand ourselves and respect each other. That's what I want. That's the way it should be, isn't it? Then us actors could get on with playing any other parts.
Posted by Michael Guillen at 10/12/2015 04:49:00 PM