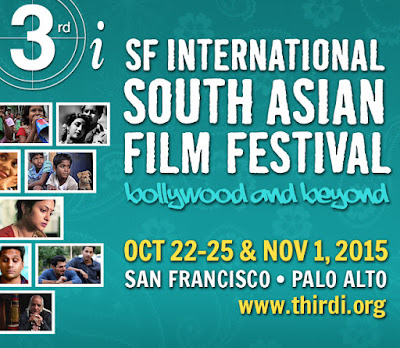 The Third i San Francisco International South Asian Film Festival (3rd I) is the highlight of my autumn film festival schedule. I'm grateful to indefatigable festival directors Anuj Vaidya and Ivan Jaigirdar, who keep both my front-yard and Vimeo mailboxes filled with screeners so I can sample the offerings when I can't attend the physical festival due to prior commitments. So my reviews are based on small-screen viewings that can never match the excitement and energy of the Third i screenings at the Castro Theatre and New People Cinema in San Francisco this past weekend. For those screenings this comes too late to be a preview, but maybe those who see it will be persuaded to attend the November 1 edition at CineArts in Palo Alto Square. 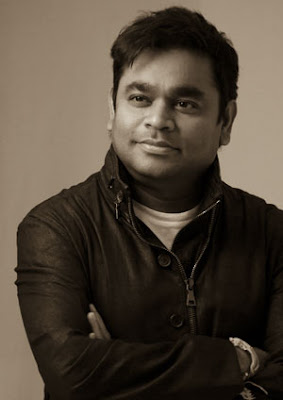 The November 1 screenings include Umesh Aggarwal's documentary Jai Ho, about the prolific and popular movie soundtrack composer and musician A. R. Rahman, or the "Mozart of Madras." A compilation of his scores wakes me up regularly when my iPod decides to revert to alphabetical order, so his songs from Bombay and Dil Se . . . have seeped through my sleep-consciousness many times. Of course Rahman has gone on to Western fame with soundtracks for Lagaan and Slumdog Millionaire, the latter of which netted him Oscars® for Best Song and Best Score. Jai Ho is a lively, conventional treatment that lets colleagues like Mani Ratnam, Andrew Lloyd Webber and Danny Boyle expound on Rahman's professional behavior and wide-ranging musicality. 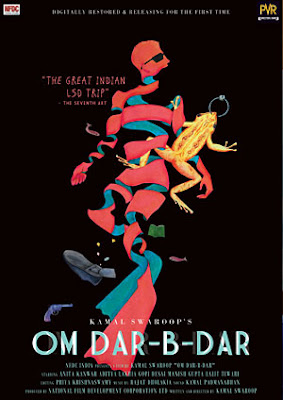 Much less conventional is Kamal Swaroop's 1988 Om Dar-B-Dar, this year's oddity in a digitally restored version. For me this cult film's great value lies in its departure from any conventional genre structure or narrative coherence. Loosely, it's about the inhabitants of a Rajasthan town facing love, music, bicycle accidents, moon landings and the metamorphosis of terrorist tadpoles. The characters talk to each other in a kind of passionate blank verse. This film, which starts getting delightfully weird in a classroom sequence 30 minutes in, is one of the standouts of the festival. I know I'm missing 80 percent of its spiritual-political-cosmological subtext, which makes the experience even richer. Reflective and self-reflexive, it's a mythological film for the 1980s. 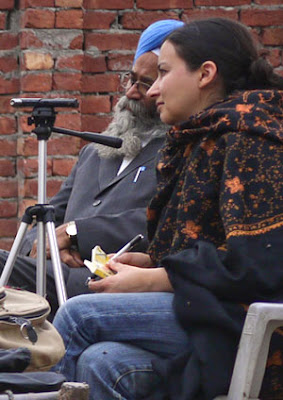 The "Voices of Partition" program examines the effects of the devastating 1947 division of Bengal and the Punjab into separate states of Pakistan and India, that stands as the largest displacement in human history with a death toll exceeding one million. Mara Ahmed's graceful documentary A Thin Wall takes a lyrical, nostalgic look at those regions before Partition through the memories of Ahmed's elderly relatives and friends. Relations among Hindus, Sikhs and Muslims are remembered as neighborly and paternalistic. Just as vividly, we learn of the tragedies that resulted from the brutal imposition of new boundaries—a division not just of regions but of hearts. The November 1 screening features a panel discussion with the filmmaker, Partition witnesses and a "citizen historian." The program is presented in collaboration with the 1947 Partition Archive, which has collected 2000 life stories from 10 countries. 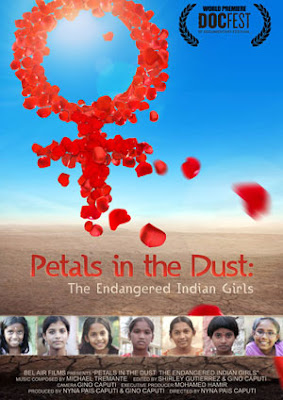 Sadly, I wasn't able to preview Nyna Pais Caputi's documentary Petals in the Dust. Subtitled "The Endangered / Missing Indian Girls," the film examines the astonishing thesis that 50 million girls have been eliminated from India's population in the last century through infanticide, selective abortion, trafficking, domestic abuse, rape and dowry deaths. I'm glad to hear the film counters its horrific cases with stories of activism and resistance.

Now I'd like to share my notes on screenings of this past weekend, from weakest to strongest. 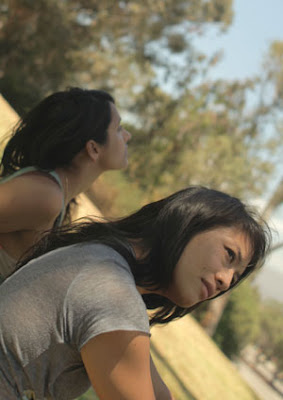 I hope that the New People's "secret screening" of a rough cut / work-in-progress of Tanuj Chopra (Punching at the Sun)'s Grass/Brown Girl Stoner Film was hazy with cannabis smoke (the note instructed viewers to "bring Mary Jane"), because that's the only way I can imagine enjoying this film—in an uncritical daze. Two clueless young women sitting in a park debate what to do about a backpack full of weed left by one of their boyfriends. First dubious step: Sample said weed, think about pizza, proceed from there if you can. As stoner comedies go, it's utterly forgettable—a blessing for the wasted viewer next morning. 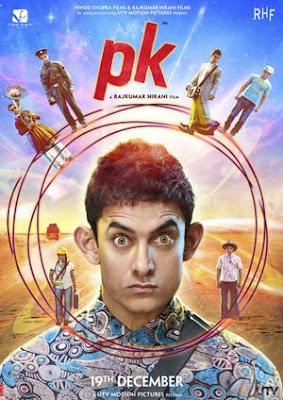 PK, Bollywood's big 2014 Christmas release directed by Rajkumar Hirani and starring Aamir Khan five years since their huge hit 3 Idiots, is a critic-proof fantasy about a goofy, lovable alien marooned on earth. Constantly mistaken for a sex pervert since he arrives naked and tries to download language skills from Earthlings by grabbing their arms, PK teams up with a rookie journalist who's in love with a taboo Muslim man to question the vagaries of the world's religions, if only to help him get back home. This gentle satire of religious differences puts PK into situations where he innocently commits one sacrilege after another. 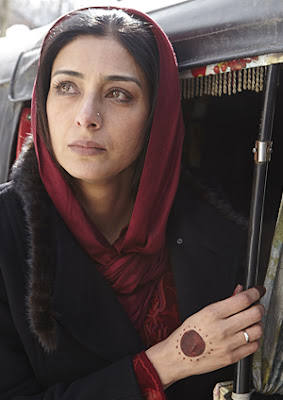 Safar / Journey (India: Pratyusha Gupta, 2013) was my favorite of the shorts I saw. A young former prostitute starts a new job in a new town as maid to a recently widowed Parsi woman. While she makes herself indispensable to her vulnerable employer and gains the fatherly affection of the chauffeur, hints of her past threaten to destroy the new life she's created. 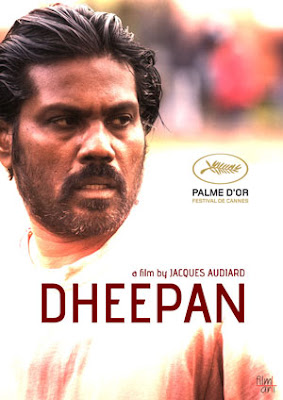 Aside from PK, Dheepan will get the widest circulation of all these films, since it was directed by Jacques Audiard and won the Palme d'Or at Cannes this year. It's an undoubtedly powerful film about a Sri Lankan Tamil Tiger who cobbles together a fake family to qualify for refugee status and becomes a caretaker in a Paris suburb. The first half is taut and nerve-wracking, as Dheepan faces a world of immigrants caught between a hostile French mainstream society and the crime-infested banlieue. But the second half, and especially the climax, makes use of Dheepan's "very particular set of skills" and turns the whole production into a generic revenge action film. 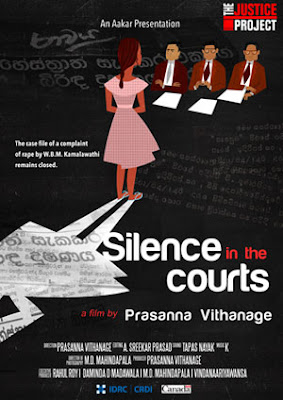 Silence in the Courts (Sri Lanka: Prasanna Vithanage, 2015) is a deceptively matter-of-fact documentary examining the efforts of a Sri Lankan journalist to uncover the cases of two wives who were sexually assaulted by the judges deciding their husbands' cases. Low-key re-enactments and voiceover recitation of court transcripts set the stage for the terrible crimes inflicted on these women and their spouses, while the newspaper editor traces his crusade to bring the judges to justice. It's a powerful indictment of the patriarchal legal system. 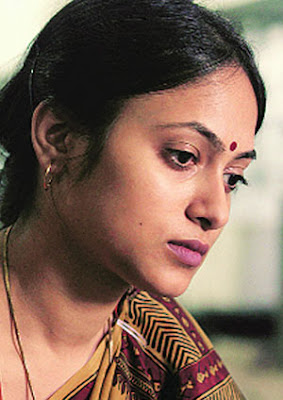 By far the strongest film of the festival is Labour of Love (India: Aditya Vikram Sengupta, 2014), a debut work that has won awards at Venice, Marrakech, Abu Dhabi, BFI London and more. After a series of titles over a black screen referring to a recession being manipulated to cause high levels of unemployment in Kolkata, we are immersed into the daily routine of first a woman, then a man, as they wordlessly and efficiently prepare for work as an accessories shipping checker and print operator. Forty minutes in, seeing the closeup of a hidden door key, we realize that they are a married couple with work shifts that ensure they will rarely sit down together. Unlike the jobless demonstrators in the streets, this couple is fully employed—but what is their gainful status worth if they never see each other? This film is mesmerizing in its attention to tiny details, delighting the voyeur's compulsion to see how others do the most quotidian things. (The husband scrapes the remains of a previous bar of soap off a newer, for reasons known only to himself.) It occasionally takes on the aura of Wong Kar-wai's In the Mood for Love, when the couple's separate walkways swing into a melancholy slow motion. In their solitude, every gesture spells love for the absent other. When they finally do come together, they're transformed into a sylvan fantasy where domestic bliss is a transcendent state.
Posted by Michael Guillen at 10/25/2015 02:38:00 PM