Voting for the 2014 San Francisco Film Critics Circle (SFFCC) for our year-end favorites presents the annual hurdle of coming up with a list of nominations that reflect individual taste within a circumscribed pool of films that have achieved theatrical distribution in the last year. In contrast to the diverse festival fare to which I am accustomed, having to narrow my choices down to so-called American “prestige” films feels a bit like a Faustian bargain where I sell my cinephilic soul to the big studios who line up critic circles like dominos. There’s not many ways to fall in this colonized symbiosis. It sometimes feels like a rigged game with obvious results, accounting—no doubt—for the repetitive lists that dominate the ramp-up to awards season. As evidence, check out Mike D’Angelo’s sobering list of the theatrically released films of 2014 to note our starting line and the limited victories of this race. Granted, any other system might prove to be a chaotic free-for-all.

Notwithstanding my reservations, “in every job that must be done there is an element of fun and when you find the fun the job’s a game.” The way this works within SFFCC is that each member is asked to send in a preliminary ballot with five nominations in each category ranked from one to five, with the first choice scoring five points down to the last choice scoring one. Once all the preliminary ballots are submitted, we are then offered a secondary ballot shaped by the tabulated results. Knowing in advance that this secondary ballot will invariably produce the names produced by every other critics circle in the country—lining up the dominos “just so”—leaves me free to use my preliminary ballot to texture my complicity by including choices that I know don’t have a cold chance in Hell, specifically those films outside the grip of Hollywood’s hegemony and the inner circles of American independents (hegemony "light"). Need I argue that this is why I’m a festival correspondent in the first place?

So—to provide a bit of transparency to the process—what follows is my preliminary ballot, which will be followed by my secondary ballot, and SFFCC’s official announcement come Sunday. I will not include, however, information regarding our Special Citation award and Marlon Riggs award. 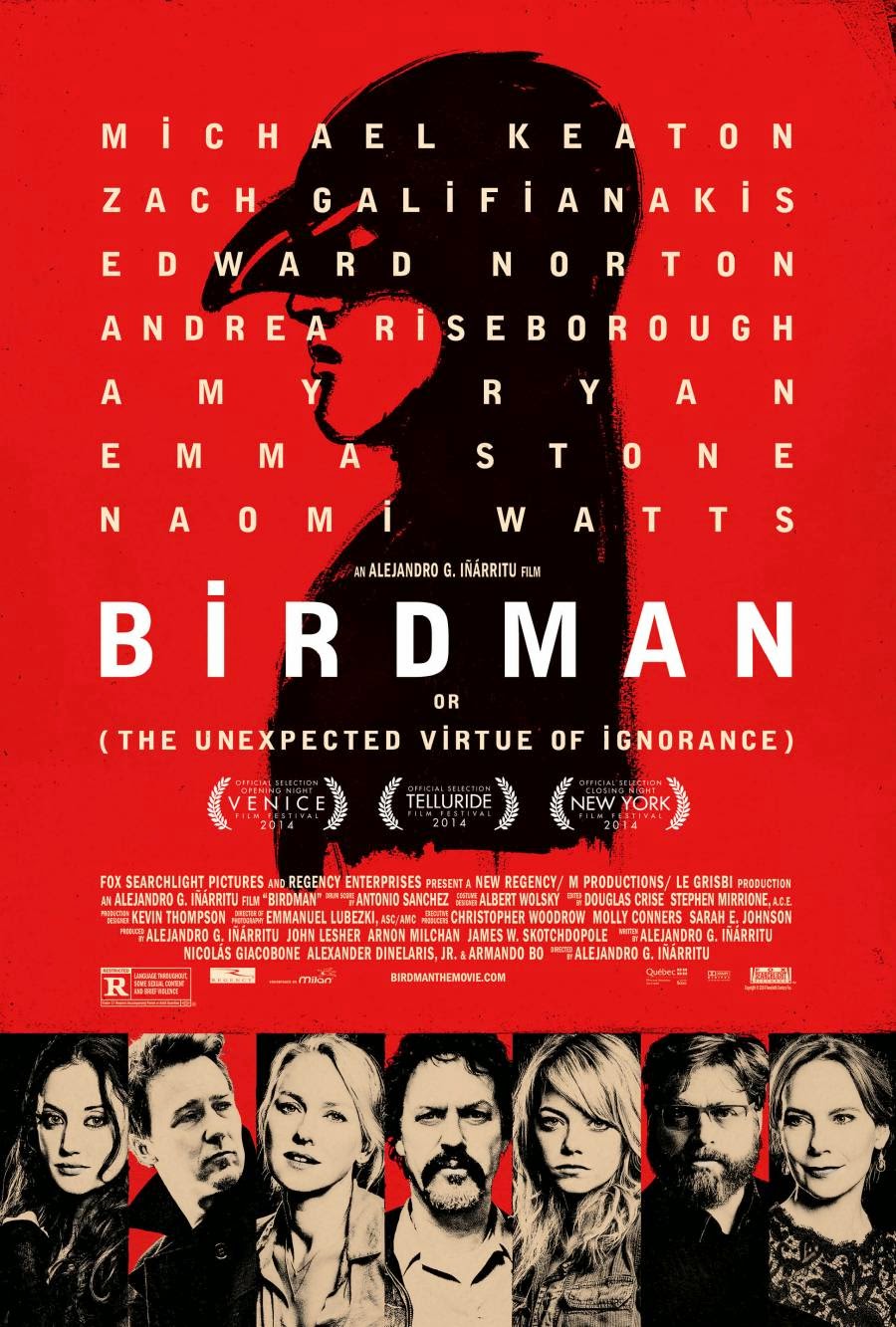 1. Michael Keaton, Birdman. I admire how SFFCC colleague Omar Moore described Keaton’s performance as “three performances in one”, at least one of which wryly comments upon Keaton’s one-off 1989 portrayal of Batman.

2. Tom Hardy, Locke & The Drop. In the same vein, I first became aware of Hardy’s work as Bane in The Dark Knight Rises (2012), though he was hardly recognizable. In these two performances this year Hardy has revealed himself to be an accomplished actor capable of holding his own without a mask and someone to keep our eyes on in scripts to come.

3. Sid Lucero, Norte: The End of History. As a Filipino actor, Lucero won’t receive much love from American enthusiasts, but his savage performance as a man ravaged by guilt was one of the most heartbreaking and shocking of the year.

4. Adam Bakri, Omar. In this breakout performance, Bakri won’t blip on many American radars, especially with this pro-Palestinian turn nested within a love story. More will be made of the problematic mentorship in Foxcatcher than the one on display here between a Palestinian youth coerced by an Israeli security officer.

5. David Oyelowo, Selma. Less an impersonation than an admirable embodiment of Dr. Martin Luther King, this is the role Oyelowo was born to play and he does a damn fine job with it.

Hon. Mention: Philip Seymour Hoffman, A Most Wanted Man. This role showed Hoffman at the peak of his game and underscores our loss; but—because I prefer to give awards to the living—I include him here by mention and not nomination. 1. Marion Cotillard, Two Days, One Night & The Immigrant. Since her breakout performance as Edith Piaf, Cotillard has proven herself again and again to be one of our greatest actresses, this year with two roles characterized by political nuance and charismatic presence.

2. Anne Dorval, Mommy. Dorval reins excess better than almost any actress I know; a necessity for Xavier Dolan’s aggressive, often over-the-top scripts. As a mother with a problem child, she exhibits love and fear in equal measure.

3. Isabelle Huppert, Abuse of Weakness. I’ve said it before and I’ll say it again, all Huppert has to do is lift an eyebrow and she pierces me to the marrow. Here she stands in as the alter-ego for Catherine Breillat’s steely reserve struggling against physical odds.

4. Juliette Binoche, Clouds of Sils Maria. Another performance where an actor seems to play more than one role within a role. First as a glamorous red carpet darling who, secondly, becomes masculinized in her search for a character. The gendered range is amazing.

5. Paulina García, Gloria. As a middle-aged woman refusing to give up her embodied sensuality, García’s performance at first feels feminist but then deepens to something unrelentingly humanist.

Note: American actresses, work harder! If Hollywood is going to weaken you in predictable roles, then seek work out of the country. 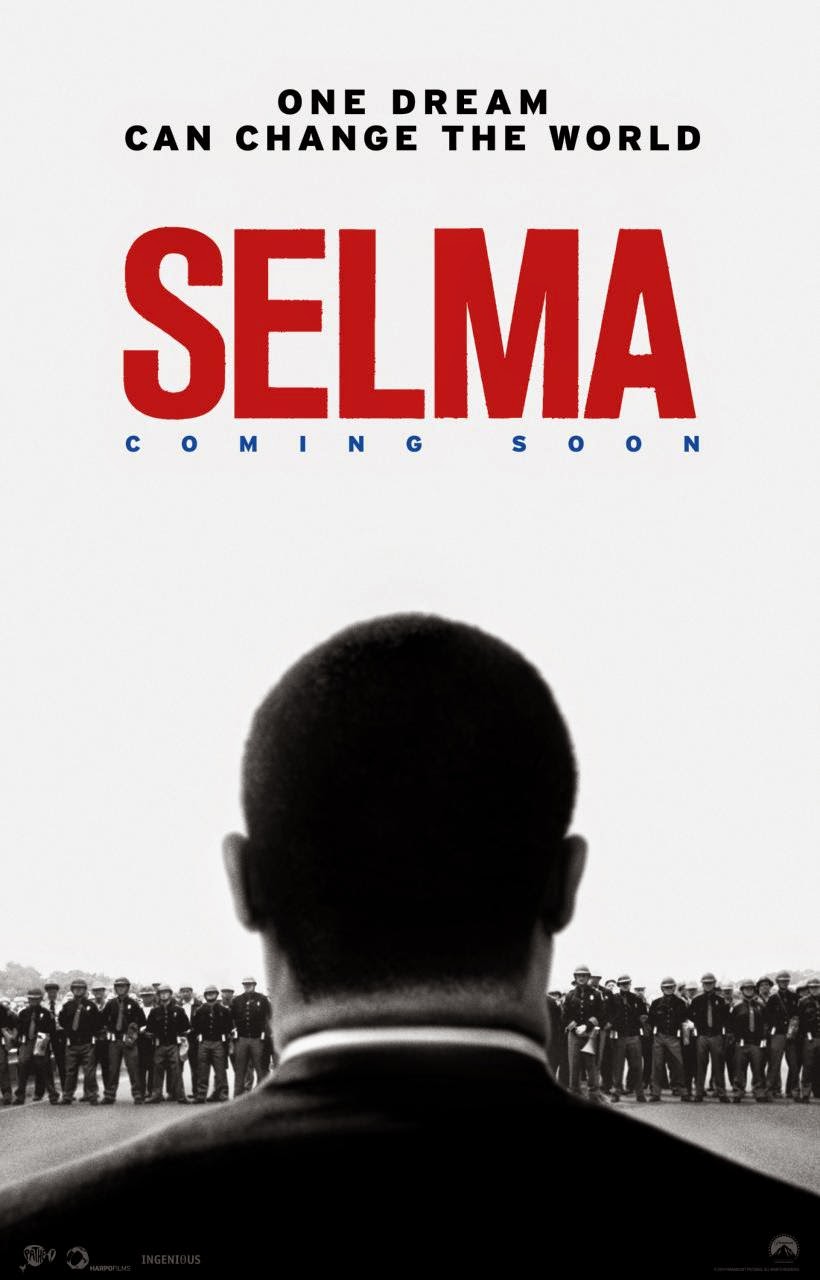 1. Edward Norton, Birdman. As a foil to Keaton’s scene-stealing dominance, Norton handles his own with wit and physicality.

2. Tom Wilkinson, Selma. It takes quite a lot for me to like former President Lyndon Baines Johnson in any characterization and yet Wilkinson does a masterful job of eliciting sympathy and humanizing the former President's difficult, compromised, choices.

3. Ethan Hawke, Boyhood. A consistently good if rarely recognized actor, this is the best thing I’ve seen out of Hawke in a performance shaped over 12 years. Talk about focus and commitment!

4. Waleed Zuaiter, Omar. You might not be able to call him evil, but Zuaiter’s handsome looks and charismatic smile sensualize and complicate his role as an antagonist in this Mideast narrative.

5. Channing Tatum, Foxcatcher. Tatum elevates his boilerplate performances as a sensitive hunk to effective levels of nuance as the luggish and vulnerable wrestler who falls prey to the manipulations of a mentally unbalanced tycoon. 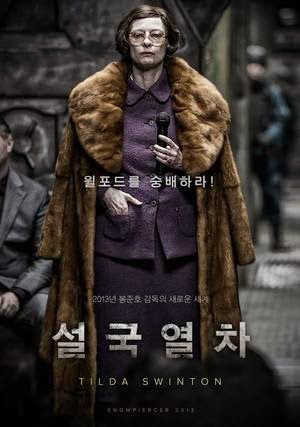 1. Tilda Swinton, Snowpiercer & The Grand Budapest Hotel. In two distinct caricatures of entitlement, Swinton excels as the mouthpiece for the 1% while resoundly skewering same.

2. Emma Stone, Birdman. With doe-eyed cynicism, Stone gives voice to a skeptical younger generation formed and informed by social media at odds with the old-fashioned integrity and artistic aspirations of her father.

3. Meryl Streep, Into the Woods. Streep colors her impressive vocal skills with now legendary acting chops to provide the center of this prize piece of American musical theater. Your heart feels for this witch weary of the world and its betrayals.

4. Kristen Stewart, Still Alice & Clouds of Sils Maria. Rebounding from being pigeonholed in the Twilight franchise, Stewart proves that—cast in the right roles—she can deliver low-stated, naturalistic performances. Who would have thought? What a welcome surprise.

5. Sandrine Kiberlain, Violette. Crisp, aloof, and stiffened with intellect, Kiberlain brings Simone du Beauvoir to life, not only as an intellectual giant, but as the reluctant beloved of Violette le Duc.

Note: The weakest category this year. I was stumped. 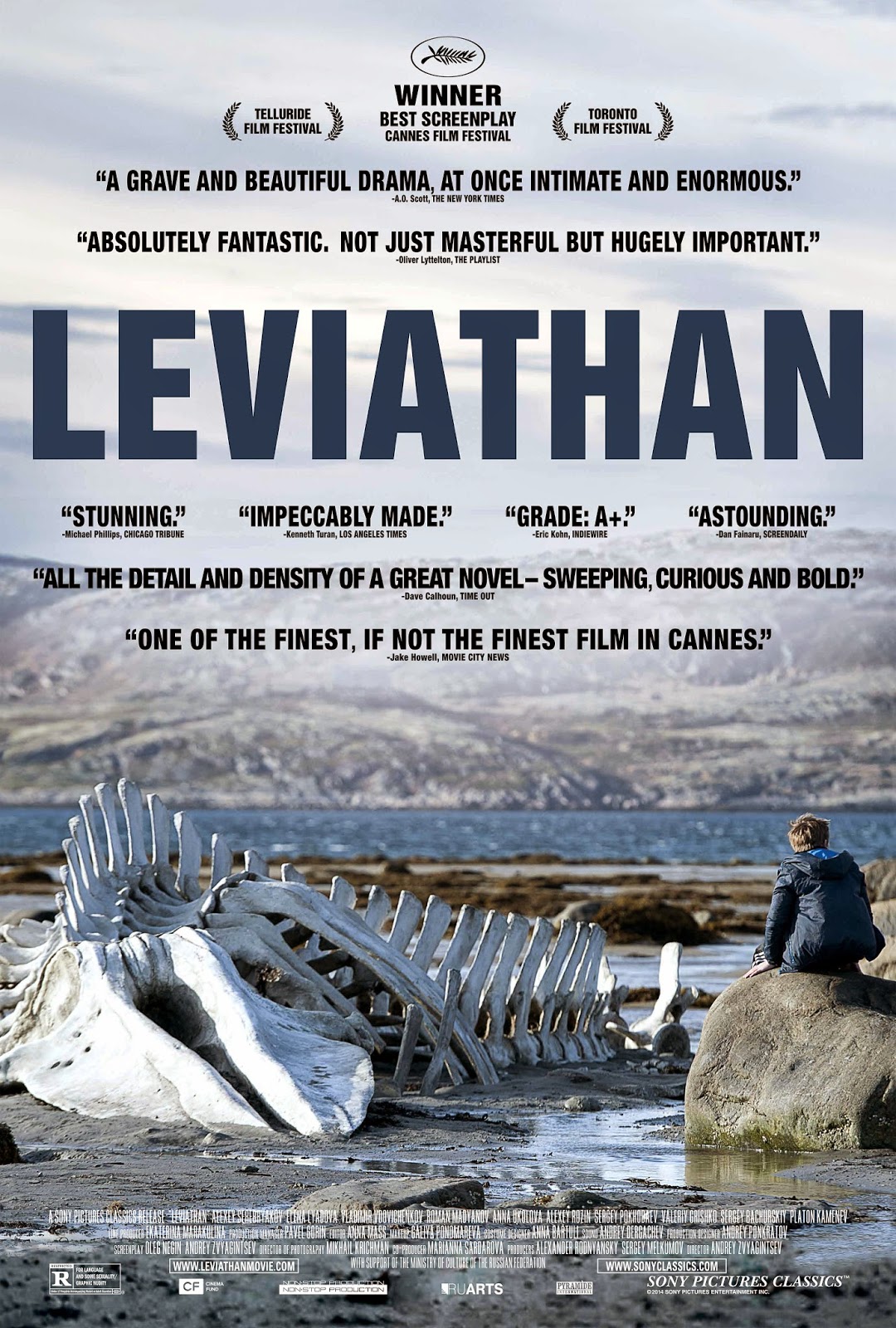 2. Lav Diaz, Norte, the End of History. Astounding in its portrayal of how a man can go crazy with the loneliness of guilt, Diaz’s take on Dostoevysky’s Crime and Punishment runs neck and neck with Leviathan for narrative heft and characterization.

5. Ruben Östlund, Force Majeure. A black comedy as it would have been directed by Ingmar Bergman, if Bergman had a sense of humor. 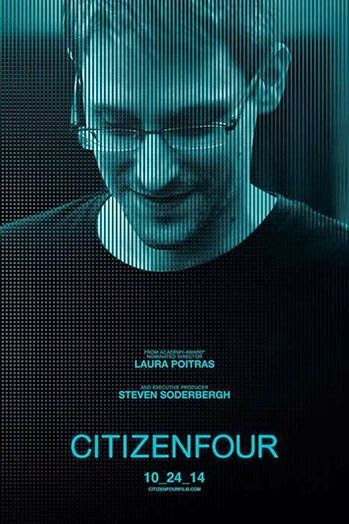 1. Laura Poitras, CitizenFour. This is filmmaking at its very best, relevant, informative and deeply disturbing. So good that I have to also nominate it for Best Picture.

2. John Maloof & Charlie Siskel, Finding Vivian Maier. A career is saved from a clutch of cardboard boxes. A fascinating story that profiles a remarkable body of street photography.

3. Daniel Geller & Dayna Goldfine, The Galápagos Affair: Satan Came to Eden. I was personally disappointed that this did not make the Oscars® short list because I found it to be an inventive documentary hybrid that testifies that all conflicts come down to one person against another, even on different sides of a remote island.

4. Rodrigo H. Vila, Mercedes Sosa: The Voice of Latin America. With a limited run in New York City, this portrait of famed folk singer Mercedes Sosa is not getting the love it deserves. At a time when most Americans lack political will, this document could prove as inspiring as nueva canción was for the social upheavals of the 1970s and 1980s in Portugal, Spain and Latin America. Who do we have these days to sing songs of resistance?

5. Ben Cotner & Ryan White, The Case Against 8. It was a brave gamble to chronicle this Supreme Court fight for gay marriage as it, arguably, could have gone either way. As such, its victory is doubly sweet and gratifying to watch.

Note: I won’t name names, but I overheard one of my SFFCC colleagues at a press screening complain about having to vote in such “uninteresting” categories as foreign film and documentary. I felt my blood rise and then settle back down as I mollified myself with my mantras: “They’re only movies” and “There’s no accounting for taste.”

Fortunately, this year has seen an amazing variety in both genres available for nomination and, for me, these were the two most difficult (let alone interesting) categories to negotiate. It frustrates me when members of SFFCC reveal that all they want to play is a game of dominos. For every nomination in this category, I had an equal choice. An honorable mention needs to go out to Rory Kennedy’s Last Days in Vietnam which humanely expands the history of the evacuation of Saigon as we know it and Rithy Panh’s The Missing Picture which reconstructs the historic atrocities within Cambodia out of its own earth. Also, in tandem with The Case Against 8 and its chronicle of the triumphant Supreme Court decision on gay marriage, I’d like to give an honorable mention to Michael Gough’s Add the Words, a documentary out of Idaho—completely out of the Circle’s circumscribed selection for still being on festival track and not yet in theaters—but important for reminding audiences that, despite gains on the federal level, LGBT communities are still struggling for basic human rights in such red states as Idaho. What good does it do to be married if said marriage means you might lose both job and home? An unnerving catch-22 in civil rights.

Note: Not necessarily a candidate for Best Picture but an honorable mention to Stanley Nelson's documentary Freedom Summer, which tracks with the concerns of Selma.  Both films revisit a historical moment in voter registration rights now currently under attack by the Republican Right.
Posted by Michael Guillen at 12/11/2014 03:45:00 PM

I should hope that voters who find certain categories "uninteresting" would have the sense to abstain from those categories, to allow those who feel more passionate about them to have a greater say in determining the ultimate awardee.

I'm confident their disinterest was framed within that strategy.