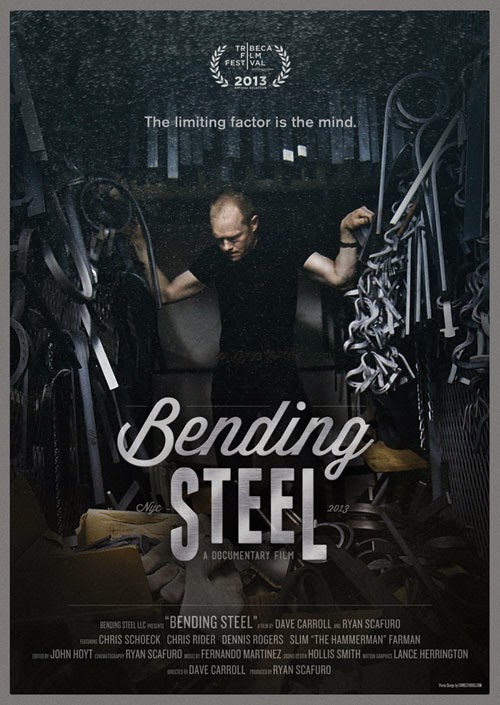 Sure to eventually end up on a double-bill with Zachary Levy's Strongman (2009), Dave Carroll's Bending Steel (2013) [official site / Facebook] even includes Stanley "Stanless Steel" Pleskun—the subject of Levy's film—among its cast of characters. Pleskun's title as "The Strongest Man in the World at Bending Steel and Metal" comes up for grabs, however, when Chris "Wonder" Schoeck, an endearing and unassuming man, trains to become a professional "old-time" strongman, wooing audiences not only with his incredible feats of strength, but with his clean-cut looks, small stature, and evident vulnerability. That is perhaps what most winningly differentiates Bending Steel from Strongman: the attractiveness of Schoeck's confidence. Bending Steel is as much about the forging and burnishing of Schoeck's confidence, as Strongman suggests the creeping doubts and diminishing returns of an aging Pleskun.

There are obvious similarities between both films: masculinity and its discontents, uncompromising egoes at odds with the times they live in (Schoeck goes so far as to characterize himself as otherworldly and extraterrestrial), concerns over the monetary viability of a chosen career, and the effects of an individual's obsession on family. Though in Bending Steel it would be more accurate to point out an individual's obsession because of family. The heartache of this film lies in the lack of support that Chris Schoeck receives from his skeptical parents. Their absence at the film's final triumph is telling, yet accents Schoeck's own maturation towards self-acceptance. What emerges out of their absence is what Gabe Toro intuits in his IndieWire review: "the unspoken idea that Schoeck finds a family in those pushing him to improve." Namely, a small coterie of committed strong men who teach him craft, skill, and poise before the public as they gather together to revive the carnivalesque attraction of the strong man at Coney Island. 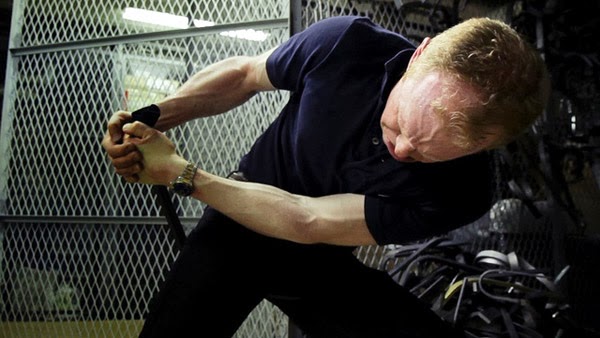 "You're not likely to see a more inspiring documentary this year than Bending Steel, " adds Toro at IndieWire. Through mastery of a piece of steel, Schoeck overcomes his social awkwardness, his inhibitions, and his fear of failure, and you can't help but cheer him on. Whatever resistance you might have toward's the film's eccentric subject matter, it warms and bends as the film "gains mileage out of its subject's modest tenacity" (John DeFore, The Hollywood Reporter). It's a no-brainer why this underdog tale won Audience Awards at the 2013 Camden International Film Festival and the 2013 Key West Film Festival, let alone Winner of the Best Documentary Feature at the 2014 Fargo Film Festival and the Jury Prize at the 2014 Oxford Film Festival, arriving to the Sebastopol Documentary Film Festival's juried section with a competitive edge.

Like its predecessor Strongman, and like a host of recent documentaries that focus on the lives of remarkable if eccentric individuals, it appears the documentary genre has set it sights on the allure of the real, which since 9/11 appears to have—as Mark Cousins phrases it—"out Hollywooded Hollywood, image-wise, and made the real world feel suspenseful and unfolding like a narrative, [making] fiction cinema look erstatz."
Posted by Michael Guillen at 3/10/2014 10:39:00 PM