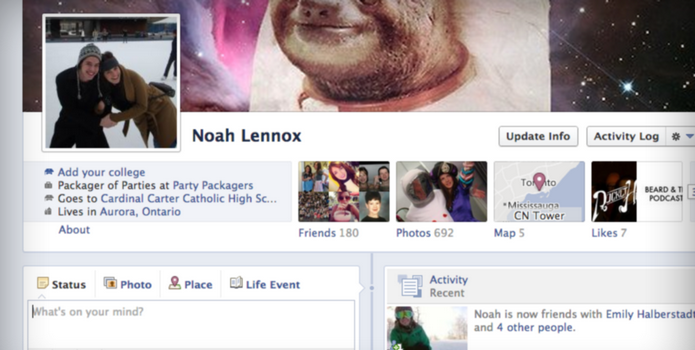 Effective for underscoring the near-Pavlovian response to social media with all its concomitant bloops and jingles, Walter Woodman and Patrick Cederberg's 17-minute short Noah (2013)—not to be confused with the Aronofsky Biblical epic about to rain on muliplexes any day now—is a story that plays out entirely on a teenager's computer screen. Noah follows its eponymous protagonist as his relationship takes a rapid turn for the worse in this fascinating study of behavior (and romance) in the digital age. The film ingeniously creates itself out of screenshots of common practices of Internet browsing while our protagonist fidgets with his Macbook desktop, online gaming, Google search functions, Facebook messaging, SKYPE, Gmail, YouTube, Wikipedia, Chat Roulette, iTunes, and iPhone texting with all the momentum of an overheated mouse caught in its own trap. This makes it equally creepy, sad and disturbing for being—let's admit it—way too familiar and yet, amazingly, it's not at all judgmental, redeeming its commentary through an honest measure of compassion. Noah will be screening with Matt Wolf's Teenage at the 7th edition of the Sebastopol Documentary Film Festival later this month, as part of that festival's insightful Hybrid Documentary sidebar.

Noah was the winner of the YouTube Award for Best Canadian Short Film at the 2013 Toronto International Film Festival where the jurors of that festival's Short Cuts sidebar commented: "This film is a commentary on the ephemeral, disposable, A.D.D. culture that many of us are consumed by and living in. It tells us a story in a way we've never seen before and it tells it well. It's fresh, innovative, and had the remarkable ability to embody complex emotion through the simple gesture of a mouse." Noah likewise won the Audience Award and Grand Prix at the 2014 Clermont-Ferrand International Short Film Festival. As astutely noted by Ollie England at Crispy Sharp Film: "Noah uses a high-concept style to tell a story: How would a relationship breakdown look from the point-of-view of a computer user? ...If you can accept that the cinematography of the film is simply watching someone browse Facebook, then the narrative and the message of the film is pure zeitgeist."
Posted by Michael Guillen at 3/09/2014 12:57:00 PM