RAYMOND DURGNAT ON PASOLINI'S THE GOSPEL ACCORDING TO MATTHEW (1964) 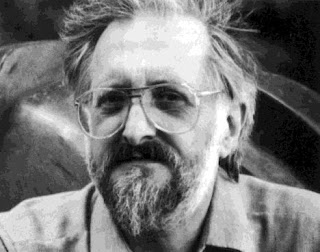 To reinforce the value of accessing the CineFiles database administered by the University of California Berkeley Art Museum and Pacific Film Archive, and following an enthusiastic cue from Jonathan Rosenbaum to familiarize myself with the work of Raymond Durgnat—gradually being collected at a dedicated website-in-progress—I contribute this transcript of CineFile 22270. My thanks to Jason Sanders for sourcing this review to the UK publication Films & Filming, June 1967.

Pasolini is an interesting character—a young man of good family who very sensitively immersed himself among Rome's layabouts, a professed Marxist and agnostic who wishes he could share the Christian faith. These contradictions provide good reason for hoping for a film about a Christ which, for once, isn't bowdlerised, paralysed and altogether emasculated by a complacent reverence which in these days of napalm and thalidomide is as useless for Sunday School children as it is for adults. Christianity, when it was young, was a revolutionary religion, even if the revolution was not that of the sword. Pasolini might show Christianity as the faith of those who try to move mountains, not of those who pretend they're not there.

The difficulty is perhaps that Christianity is so many-faceted and ambiguous that every Christian meets his own Christ, and a director who doesn't have some sort of personal conviction is going to have immense difficulty making up his mind as to which Christ he means to make a film about—especially as all powerful organizations with different views are going to denounce him as heretical, blasphemous and so on. The prospect of a Marxist Christ is very exciting, especially in view of the current Marxist concentration on "alientation" and other spiritual diseases. Again, a hard-headed approach to the founder of Christianity might enable the cinema to catch up with the "historical" Christ proposed by Dr. Schweitzer, who erred humanly as well as forgiving divinely; or with the "socio-political" Christ emerging from current studies of the Dead Sea Scrolls and other forms of historical research. 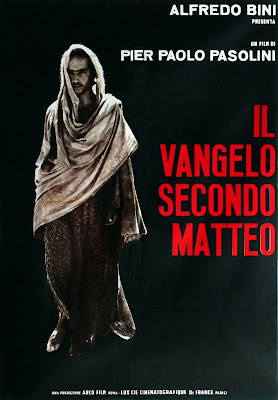 Pasolini, understandably, has refrained from embarking on the (immense) complexities of applying Marxist theory to biblical times, or venturing into the furious cross-currents of biblical scholarships. He has explored another way of bringing a rough vigour into the Gospel Story. His "Holy Land" is the Italian countryside; all the actors are non-professional peasants; Christ himself is played by a young Spaniard. The script restricts itself to the St. Matthew's Gospel (which omits certain cherished details), and the resultant storyline gives a rough, raw "cinéma-vérité" effect with which the direction and the photography are also imbued. Thus, at Jesus' trial, the camera peers round from behind heads, which seem to block the view. The visual "transpositions" (of modern Italy for ancient Palestine) have an absorbingly abrasive effect on the overgrowth of the picturesquerie, and a sombre beauty itself sufficient to act as a new commentary on the Gospels. Familiar sayings and exchanges take on a new pith and point in peasant mouths and faces, which relate them to the thinking-style of an oral culture, like that which produced them, rather than to our literate culture: they take on far more sharpness. The St. Matthew Christ is a Christ who harshly curses; and Pasolini's Saviour, though as sensitive and sad as tradition demands, has, also, a quality of inveterate sullenness, of irreconcilable rejection, of the world. He smiles only once, to the children clamouring round him. His sadness has a certain pitilessness which itself is poignant, and without the weak piety of the pre-Raphaelite Christ whose influence has ruined so many films. It rings true, frees the imagination and is perhaps the film's profoundest point. After all, Pasolini's Christ is as near the Wild Angels as the swinging nuns of St. Mary's, and that's the only position from which Christianity can begin.

The style of playing evokes Bresson (the sermons delivered in a fast, hard, impassive style), and the film is in a sense the spiritual rendezvous of Bresson and Rossellini. Pasolini's "neo-realism" paradoxically results in a major poetic departure. The magnificent settings are visibly in ruins (an effect matched in certain Renaissance paintings), giving a strange pathos and timelessness, while the village-size crowds give a trenchant intimacy to the Jerusalem scenes, too often handled in an emptily spectacular way. 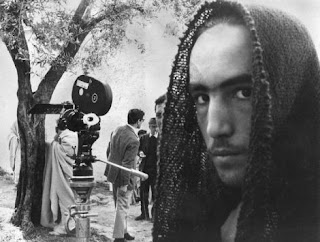 In other ways, though, Pasolini makes too many concessions to various conventions. At one moment, a newsreel-style camera—at another, elaborate compositions. The angel of the Lord appears matter-of-factly, but has Botticelli curls. Stylising his "harsh Christ", Pasolini overindulges shots of him snarling as he strides away—remarks which are curiously audible in extreme-long-shot. During the Massacre of the Innocents, little bundles of rags pretending to be swaddled babes are thrown into the air with a curiously unconvincing effect. The priests and the Pharisees have hardly a redeeming feature, so lending a melodramatic tone to the Bible's purely moral opposition. Perhaps Pasolini's best moment is an uncompromising close-up of a hideously disfigured leper, and one holds one's breath as at Buñuel; but the healing gives the game away, switching one's thoughts from Christ to the make-up department. And miraculous healings conclude in expressions of joy which strike one as glib and silly—surely the miraculous is awe-inspiring, even fearful, too. 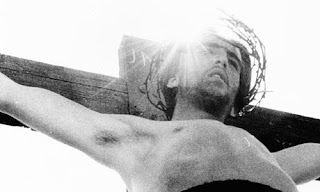 Gradually, in fact, the film capitulates to the conventional reverences surrounding the Christ story. One's interest has to shift to the aesthetic level rather than the spiritual one, and consider each of the various episodes as a challenge to which Pasolini responds—always intelligently, but with varying success. Pasolini's is the most convincing visualisation of how Jesus might have upset the moneychangers in the Temple, and the crucifixion has a horrible casualness, making no concession whatsoever to the greatness of the event, and sharpening the physical anguish through the reactions of a fellow-victim. But the admirable moments are swamped by longish scenes in which Pasolini's "cinéma-vérité" style becomes something of a cover-up for a lack of interpretative trenchancy. Too often the modern peasant faces in archaic clothing suggest nothing so much as a village pageant approach to the Gospel. Pasolini's reliance on landscape is itself a symptom of withdrawal from the real drama. The basic trouble is clearly that Pasolini, having thought of a "sullen" Christ, hasn't much more in the way of spiritual challenge to offer. Devout Christians will no doubt be more moved by it than I, and sentimental ones healthily startled. A half-hour digest might have been overwhelming, but as it is I found myself thinking how much longer to go.

Whether or not this is Pasolini's original cut, I don't know (the Venice Festival version was considerably shortened). But, just for the record, it doesn't, as has been said, show Matthew's Gospel fully: notably, omissions include Matthew 19:12, 22:24, 24:29, 26:35, 27:37 and various thoughts and details which I should have thought more important than the (historically dubious) Massacre of the Innocents.
Posted by Michael Guillen at 9/11/2013 03:43:00 PM

I am afraid it is one of those movies that seems odd 50 years on -- I certainly felt that way about the much-praised Marienbad of Resnais on seeing it recently -- but the primary consideration in any approach to Pasolini's Gospel is a statement he made during an interview, when asked about the apparent contradiction of a gay Marxist atheist making a movie about Jesus Christ. He responded by saying that he is a non-believer but he has "a nostalgia for religion." This is the statement of a mature person disillusioned of organized religion such that he may film the Passion as he learned it in youth.

What a lovely comment, Jacobus, thank you. And so important to distinguish between the religious impulse--which in itself links man to the ineffable--from organized religion, which debases the impulse to dogma.