EL LIMPIADOR / THE CLEANER (2011): PERU'S OFFICIAL SUBMISSION TO THE OSCARS® 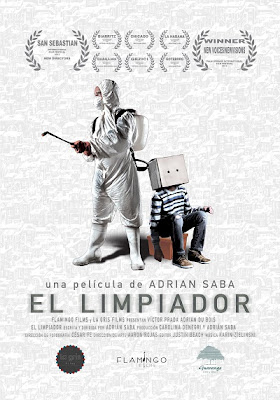 As recently announced by Agustin Mango at The Hollywood Reporter, Adrián Saba's opera prima The Cleaner (El Limpiador, 2011) will be Peru's submission for the foreign language Oscar® category. The announcement was made this week by Peru's Ministry of Culture, whose selection committee stated The Cleaner was chosen "for its original proposal of an apocalyptic Lima, where loneliness and strain are shown through an effective use of cinematographic elements, expressing a city that slowly fades out." The Evening Class congratulates Adrián Saba on this achievement!

As synopsized by Robert Avila in his program note for the 56th edition of the San Francisco International Film Festival (SFIFF): "As a mysterious epidemic eviscerates Lima's adult population—but spares its children—a solitary middle-aged forensic worker discovers an orphaned boy at one of his cleanup sites and decides to shelter the traumatized youth until he can find a relative to take him. As time passes, a subtle transformation takes hold of both man and child in this gently haunted and affecting study of social alienation and redemption."

As Michael Hawley presciently suggested in his capsule review—while he can't be sure how, or even if, Saba's film is commenting upon contemporary Peruvian society—"it's clear that his distinct voice is one we should be hearing more of in the future." The film has certainly gained pedigree on the festival circuit. It first came to my attention at the Palm Springs International Film Festival (PSIFF) earlier this year, having already received a New Directors Award Special Mention at its San Sebastián premiere. It ended up winning the New Voices / New Visions Grand Jury Prize at PSIFF 2013 where the jurors remarked: "While it is set in the midst of a deadly epidemic, this film eschews the usual genre tropes and instead offers an aesthetically distinctive, minimalist portrayal of a human connection at a time when it seems all hope is lost. The director creates an eerie, strangely calm atmosphere which is carefully controlled but never feels forced, and without sensationalism or overt sentiment, allows a touching bond to develop between his lead characters, a lonely old man and a young boy. With The Cleaner, Adrian Saba has created a singular, unusual and intimate tale which stayed with us long after viewing."

I regretted missing The Cleaner at PSIFF—and the opportunity to hear Saba discuss his film with his audience—but was pleased to catch it at the recent Panamá International Film Festival (IFF Panamá) where lead actor Víctor Prada (last seen in Octubre) accompanied the film and interacted with his audience. There Diana Sanchez categorized the film as "an inspired combination of science fiction and Latin American neorealism" where "kindness and generosity reign … despite the surrounding death and decay." By "science fiction", I understand her to mean that The Cleaner is a "near future" narrative, similar to Alex Rivera's Sleep Dealer (2008). Without question, The Cleaner evokes an eerie temporal alterity and rewards the patient viewer with heartfelt flourishes.
Posted by Michael Guillen at 9/30/2013 07:50:00 PM