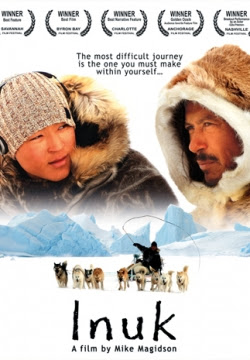 Roxie Releasing is proud to present the U.S. theatrical premiere of Inuk (2010), a coming-of-age drama directed by Mike Magidson. Inuk will open in San Francisco at the historic Roxie Theater on September 27. A national release will follow after the turn of the year.

Co-written by Magidson, Ole Jørgen Hammeken (who stars in the film), and anthropologist Jean-Michel Huctin, Inuk premiered theatrically in Greenland in May 2011, becoming a major commercial success, selling more tickets in its home country than such American blockbusters as Avatar or The Twilight Saga. It went on to become a winner of multiple international film festival awards (including Best Film, Director and Editing at the Savannah Film Festival), as well as being chosen as Greenland's Oscar® submission in 2012. In that capacity, I caught the film as part of the Awards Buzz sidebar at the 2013 Palm Springs International Film Festival, where it sold out every screening and was included in Best of the Fest.

Inspired by the "Children's Home Uummannaq" situated 500 km north of the Arctic Circle in the small town of Uummannaq, Inuk covers a journey from Greenland's south to its north as an homage to the origins of the Inuit people. The story concerns troubled 16-year-old Inuk (played as a teen by newcomer Gaba Petersen), who witnesses his father's death in a tragic dog-sledding accident. Raised in the south in Greenland's capital Nuuk by his increasingly alcoholic mother and a violent step-father, Inuk becomes cut off from his former life in the wilds. 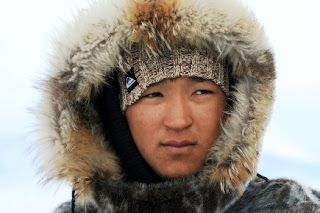 One morning, after pulling the half-frozen boy out of an abandoned car, social services sends Inuk north to a foster home on a tiny island in the middle of the Arctic sea-ice, where Inuk swiftly becomes delinquent and unruly. His foster guardian and teacher, Aviaaja (Rebekka Jørgensen) pairs him up with bear hunter Ikuma (Ole Jørgen Hammeken) so that he may learn wisdom. The taciturn hunter's attachment to the land and knowledge of traditional ways offers a glimpse of a different life for the troubled teen. But Ikuma himself is suffering self-doubt after his own world begins to decline due to the effects of global warming. Harnessing the dogs, the odd couple embarks on a seal-hunting expedition—a visceral sequence handled with style and verve by Magidson—and Inuk comes face-to-face with his past and reawakens the old injury that has affected Ikuma's life. Despite the bitter cold and their treacherous surroundings, the most difficult journey they both must make will be the one within themselves.

With stunning cinematography by Xavier Liberman and Franck Rabel, shot on the sea ice in sub-zero polar temperatures, Inuk features performances by teenagers from the Uummannaq Children's Home, all playing roles close to their real lives. Created as an original road-movie on a sea of ice, Inuk is both an authentic story of Greenland today—a country torn between tradition and modernity—and a universal story about the quest for identity, transmission and rebirth after the deepest of wounds.

Unfortunately, I watched Inuk at the Palm Springs International on screener on my laptop after fortuitously meeting Ole Jørgen Hammeken and composer Justin Michael La Vallee in the press lounge. My schedule didn't allow me to watch the film's final PSIFF screening and I didn't have the chance to meet director Magidson. I hoped even then that an opportunity might arise in the future where I could view Inuk on screen in-cinema. When it didn't show up at the San Francisco International, I thought I had missed my chance; but, the Roxie has redeemed all regrets.

In retrospect, I feel honored to have met Hammeken who plays the hunter Ikuma who—along with Inuk—has had his heart frozen by loss. Both stare at the world with eyes of ice. How the two find each other and heal each other through traditional Inuit ways is the driving momentum of this classic coming of age tale, bolstered by breathtaking austere landscapes, wonderful footage of dog teams at work, and a soundtrack that mixes modern and ancient melodies to atmospheric effect.

Hammeken advised he wasn't originally considered for the role of Ikuma, admitting he was not truly a hunter, even though familiar with dog sledding through expedition work. The hunter that was originally cast to play the role of Ikuma had to drop out of the project because hunting season started and his priorities were firm: hunting took precedence over filmmaking. As the bristly Ikuma whose eyesight (and confidence) are failing, troubled by the loss of his son, Hammeken delivers a pitch-perfect performance. When I teased him that he would now become the go-to actor for future Greenlandic productions, he laughed and said no, no, that would not be the case, though he has been working on securing footage of his northern expeditions and, undeniably, has enjoyed traveling the world accompanying Inuk, most recently to Seoul, South Korea.

Hammeken and I swapped expedition stories; he in Greenland, me in Central America. I admitted how I don't much like ice and snow and vividly recall his smiling reaction—ice, after all, comprises the Inuit soul—but, after seeing Inuk, nothing would be more of an adventure than accompanying Hammeken on one of his expeditions. I’ve only seen Greenland from the air on transatlantic flights, but recall it being beautifully blue from high above. How wondrous it would be to experience it from a dog sled! To see shadows shift across the ice as in one particularly memorable sequence in Inuk. 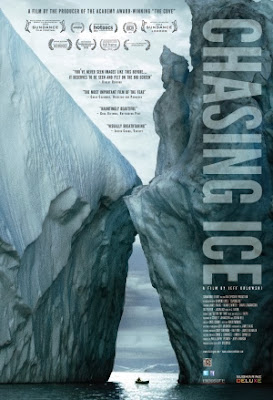 We discussed the documentary Chasing Ice. He knew some of the people involved in that project. We both expressed disbelief that there are still those—in the face of surmounting evidence—who disclaim global warming. He has seen firsthand how the ice is going “bad.” For him it is dramatic, definitive evidence. He wonders if Americans can possibly comprehend? Only by degrees, I responded. It’s now official: 2012 was the hottest year in American history, by one degree. And look at all the damage that caused!

My fingers have been crossed that Hammeken and I might have the chance to cross paths again, and it will be a delight to finally meet the film’s director, Mike Magidson, who will be present for a Q&A after the film’s first screening. This proves a poignant homecoming as Magidson is originally from the Bay Area, born at the height of the 1967 “summer of love” in Oakland, California. After getting a college degree, Mike immediately set off to Los Angeles where he was cast in a series of small theatre productions. Unable to pay his rent with his modest actor fees, Mike took a job as an apprentice editor with one of Hollywood’s top ranked trailer producers, Intralink Film Graphic Design, where he began to dream of a career as a filmmaker. Following his heart and a strong curiosity for French culture, in 1992 Mike packed up a suitcase, and moved to Paris, France. After several years editing for such reputable directors as Pan Nalin, Antoine de Maximy, and Jean-Michel Carré, in 1998 Mike borrowed a friend’s camera and made his first award winning documentary, Kanada. Eleven years later, Mike has written and directed over twenty documentaries and shorts. Inuk is his first feature-length narrative film.
Posted by Michael Guillen at 9/23/2013 05:32:00 PM