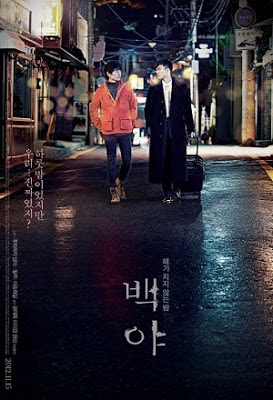 Positioned within Frameline 37's spotlight on Queer Asian Cinema, South Korean entry White Night (Baek Ya, 2012) is LeeSong Hee-il's follow-up to No Regret (2006), which emerged as a milestone in Korean gay cinema. White Night had its international premiere in the Dragons & Tigers program at last September's Vancouver International Film Festival, and screened in BFI's Gay & Lesbian Film Festival and the Berlin Film Festival earlier this year, and has continued its presence in various festivals worldwide, landing two screenings at San Francisco's Frameline.

As synopsized by Brendan Peterson, White Night is a "mesmerizing exploration of painful memories and dangerous obsession." Won-gyu (Won Tae-hee) is a flight attendant who has returned to South Korea after two years of self-imposed exile overseas upon learning that the homophobe who brutally bashed he and a friend outside of a gay bar is being released from jail after a minimum sentence. Won-gyu briefly reconnects with his ex, now limping, who wastes no time in blaming Won-gyu for his disabled condition. Apparently, Won-gyu ran away from the assault, leaving his friend to take the brunt of the violence, and then ran away from the country to process his trauma.

Won-gyu runs away one more time and abandons his limping friend at the cafe. Thus, the tone of self-loathing and ineffectuality is set early on as Won-gyu fantasizes on revenge, even as he is no more capable of exacting same than when first assaulted. Enter motorbike courier Tae-joon (Lee I-kyeong), a feisty internet hook-up expecting an easy one-night stand, who is more accustomed to physically fending for himself and who eventually steps in to exact the revenge Won-gyu desperately craves.

The film is primarily a desultory and nocturnal mood piece with brooding attitudes and atmospheric affects draped over a minimal script. Lots of cigarettes are idly chainsmoked, butts crushed underfoot, and lighters flicked open and shut, killing time until Won-gyu has to catch his morning flight back to Europe. The on-and-off attraction between Won-gyu and Tae-joon feels staged and unnatural as the two walk stiff-shouldered side by side through Seoul's neon-lit streets, refusing to look at each other, let alone speak. Visually it borders on the unintentionally absurd with overwrought meaningfulness. At times its silliness made me smile. When Tae-joon complains that he's a "crazy bastard following a crazy bitch", it seemed the most genuine statement made throughout the night's vigil. 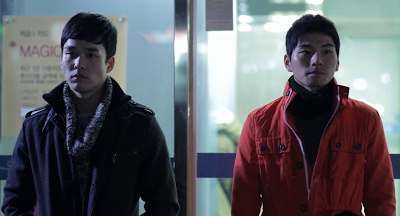 The true depths of this film are in its thematic implications, not fully realized by its performances, its script, nor its direction. Those implications are that damaged gays act out and hurt each other instead of learning to love each other, and how self-fulfilling is that? White Night suggests that someone as traumatized as Won-gyu has become incapable of love and that whatever dignity he might have salvaged from that violent attack years ago has turned inwards into self-loathing. Perhaps because he was too weak to defend himself? Perhaps because he ran away, too frightened to help his friend? Perhaps because society doesn't care enough to administer appropriate justice? He desires anonymous sex in public toilets as a gesture of self-debasement. When Tae-joon eventually leans him over and fucks him over a urinal, one doesn't sense pleasure as much as a psychological re-enactment of a punishment Won-gyu believes he deserves, even as one senses a trace of compassion in Tae-joon treating him as he wants to be treated. The power struggle between Won-gyu and Tae-joon can hardly be called love, more the therapy of sexual theater, but it is as close a connection as this one night will allow and sometimes, White Night suggests, that's as good as it gets. Sadly, that's about as good as this film gets.
Posted by Michael Guillen at 6/17/2013 06:41:00 PM

Great review--just saw this at Frameline & was a bit perplexed by it. Your read of it is spot on, especially the self-loathing of the main character. I much preferred the guy in the orange jacket, as he was much more self-actualized, as we used to say in the 70s : )