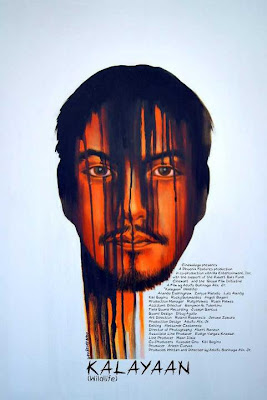 Reminiscent of the sensually dilated visions of Apichatpong Weerasethakul and João Pedro Rodrigues (Tropical Malady and O Fantasma, respectively), Adolfo Alix, Jr.'s Kalayaan (Wildlife, 2012) likewise exudes a nocturnal sheen as it slinks through a (somewhat) homoeroticized psyche, suggesting a gradual descent into madness. The opening scene tracks perfectly, with an unidentified nude male being blown by a mermaid among the shadowy mangrove roots, climaxing to the sound of a gun shot. A dream? A fantasy? Who's to say? Certainly not Julian, the taciturn soldier stationed on Kota, a remote military outpost on the disputed, isolated Spratly Islands. 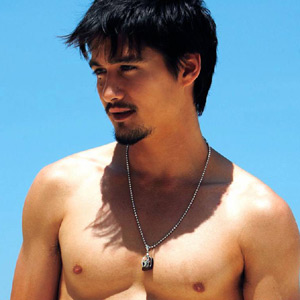 Winner of the Balanghai Trophy for Best Cinematography (Albert Banzon), Best Production Design (Adolfo Alix, Jr.) and Best Sound (Ditoy Aguila) when it premiered in the Directors Showcase at the 2012 Cinemalaya Independent Film Festival, Kalayaan recently received comparable accolades from The Young Critics Circle who—along with awards for cinematography, production design and sound—additionally singled out Teresa Barrozo's aural orchestration. Kalayaan is having its U.S. premiere as part of New Filipino Cinema at the Yerba Buena Center for the Arts.

In his review for Variety, Richard Kuipers likewise extols Kalayaan's high order technical feats achieved on a low budget, and he tunes in to Kalayaan's "internal logic" to appreciate its elliptical narrative, which he cautions might frustrate the impatient viewer. Albert Banzon's camera work mutes Kota's paradisal beauty and elicits an environmental menace that successfully visualizes Julian's beleaguered psyche, whose paranoia is further underscored by Ditoy Aguila's cacaphonous sound design mixing "low-bass industrial rumblings with the shrill tones of an insistently ringing bell." As stated by Gabriel Gatbonton, the island is given a "terrifying bipolar character—paradise by day, wilderness by night" and the island's beauty ironically compromised by monotony. A sense of the narrative's alterity is enforced throughout the first half of the film with startling images that are never explained (a body on fire submerged face down in beachside waves), Julian's silence, and an overall non-diegetic approach that edges the narrative's traction forward by viscerally immersing the viewer in Julian's unsettled perspective. 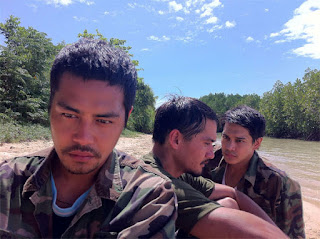 It isn't until about half way through the film that Julian's absolute isolation is interrupted by the arrival of Eric (Luis Alandy) and Lucio (Zanjoe Marudo), fellow soldiers sent to Kota by commanders concerned over Julian's lack of radio response. Swiftly caught into the round of Julian's routine, Eric and Lucio jog along the beach, do push-ups, shoot hoops, and struggle to draw Julian out of his shell, much like his pet turtle. They make him eventually laugh by staging a campy beauty peagant (that slyly critiques Philippine relations with Malaysia and China). Their narrative purpose, however, lies essentially in suggesting the back story that has challenged Julian's sanity. They discuss what Julian never reveals. By film's end it's a free-for-all as to what has actually happened; but, it's done so evocatively that it hardly matters. The descent has provided its own distinct pleasure.
Posted by Michael Guillen at 6/05/2013 08:44:00 PM