For his singular vision, passion and bravery, the Fantasia International Film Festival (Fantasia) is bestowing their 2013 Lifetime Achievement Award to the great Polish master Andrzej Żuławski, director of such individualistic and award-winning acts of filmmaking as Possession (1981), La Femme Publique (1984) and L'Amour Braque (1985). A gifted and enormously unconventional talent, Żuławski has created some of the most breathtakingly unique films you will ever see. Feverishly cinematic and often controversial, Żuławski's filmography explodes with dizzyingly evocative imagery, primal, animalistic performances and raw sexuality and emotion. His work pulverizes societal norms with surrealism, grotesquerie and above all else, honesty, ferociously buzzing with poetry and a black sense of humor. He has remained pure throughout his career, never compromising for the sake of mainstream appeal.

Fantasia will give the award to Mr Żuławski at a special screening of Szamanka (1996) on the night of July 25. We will also be screening L'Amour Braque as a special co-presentation with the Cinémathèque québécoise. 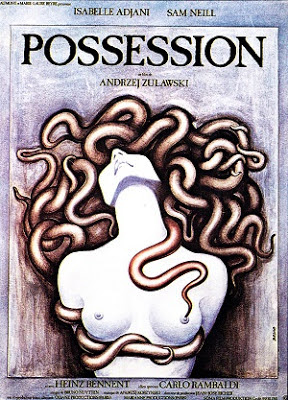 In conjunction with this special event, Fantasia and the Miskatonic Institute of Horror Studies will co-present a rare exhibition of the work of Barbara "Basia" Baranowska—best known in North America for her poster for Żuławski's Possession—the unsung hero of Polish poster art. To kick off the BASHA exhibition, leading scholar of Eastern European cult cinema Daniel Bird will give a talk on the history, styles and influence of the Polish Poster School, including rare clips and stills. By way of introduction, The Horse Hospital offers a write-up on Baranowska.

In addition, Mr Żuławski will be participating in Fantasia's Frontières International Co-Production Market (profiled at IndieWire) with a new project, Dark Matter, to be produced by Marcin Wierzchosławski.
Posted by Michael Guillen at 6/29/2013 07:03:00 AM