The world's oldest LGBT film festival celebrates its 37th anniversary this year, as Frameline's 2013 edition rolls out in San Francisco and Berkeley from June 20 to 30. Globally, the fest also remains the largest event of its kind, with this year's record-setting 800 submissions being whittled down to a mere 82 features and 155 shorts representing 30 countries. At the festival press conference it was noted that 2013's line-up is top-heavy with romances and comedies, something not necessarily reflected in the seven narrative and four documentary features I previewed. 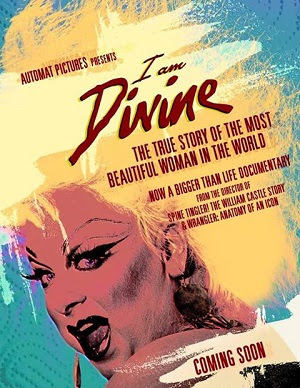 For queers of a certain age and temperament, the highlight of Frameline37 has got to be I Am Divine, the long-awaited documentary about the "cinematic terrorist" alter ego of one Harris Glenn Milstead from Baltimore. I fess up to being a rabid Divine fan. I know the films by heart and saw him act in the stage play "The Neon Woman." I also own a stack of Divine vinyl and watched him perform those same songs live at The Stone nightclub on Broadway not long before his death in 1988. I even read the book written by his mother. So when Kickstarter came calling, I couldn't refuse. I'm very pleased with the fruit of my (admittedly meager) investment, which shouldn't be a surprise given the participation of director Jeffrey Schwartz, a master at this kind of bio-doc (Spine Tingler: The William Castle Story and last year's Frameline opening-nighter, Vito). I Am Divine is lovingly assembled and succeeds whether you're a newbie or diehard devotee, with ultra rare photos, archival clips and interviews with co-stars Tab Hunter, Ricki Lake and virtually every still-breathing Dreamlander. Personal assistants, ex-girlfriends and boyfriends, mother Frances, Joshua Grannell aka Peaches Christ and of course, the ubiquitous-for-a-good-reason Mr. John Waters, all chime in as well. The festival's "hold-review" policy for this film prevents me from saying much more, but be advised that I Am Divine screens one-time only, at the Castro Theatre on Sunday, June 23. Tickets are still available. 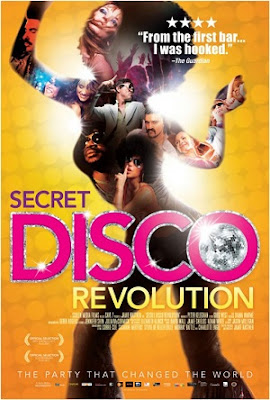 It's only a short hop from Divine to Disco, the latter being the subject of Jamie Kastner's Canadian documentary, The Secret Disco Revolution. As an early and enthusiastic adherent in that revolution, I can vouch that the film gets it right—especially how the music began as joyful, 4/4 beat, Philly-based soul (The O-Jays, First Choice) being played in gay and black urban clubs in the early 1970's. Crucial early tracks like Barry White's "Love's Theme" and Manu Dibango's "Soul Makossa" get spotlighted, along with dance crazes like the Hustle and the Bump. I lost interest in the scene well before the release of Saturday Night Fever and Kastner's film recounts that period as well. As it spread to the straight, white mainstream, the music devolved into a thumping, narcissistic parody of itself, which lead to the racist/homophobic backlash of Disco Demolition Night. The Secret Disco Revolution pinpoints disco's death date as August 25, 1979, the day The Knack's "My Sharona" knocked Chic's "Good Times" off Billboard's Hot 100 top spot. Our guides through this slice of a music history are a rather silly Mod-Squad-ish trio of disco revolutionary "masterminds" and several "experts" whose pronouncements on the music's socio-politico import can be pretty eye-rolling ("We can see beneath Disco's carefully vapid veneer to its true aim—the mass liberation of gays, blacks and women from the clutches of a conservative, rock-dominated world.") Still, this doc does its job with lots of fun archival clips and interviews with the likes of Evelyn "Champagne" King, Vicki Sue Robinson, Thelma Houston and Harry Wayne "KC" Casey. Oddly enough, the film opens at Landmark's Opera Plaza Cinema on June 28, the day before its lone Frameline screening. 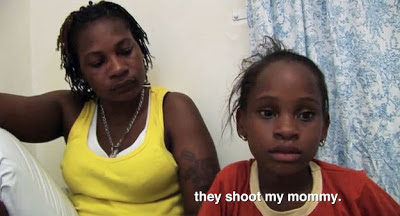 Each year Frameline has documentaries which remind us how dire life is for LGBT folk in many parts of the world. And it's getting worse. Just witness recent events in Russia, Nigeria and Georgia—films about which we'll no doubt see at Frameline38. I became aware of Jamaica's rampant homophobia back in 2009, when U.S. concerts by musician Buju Banton, including one in San Francisco, were cancelled due to pressure from LGBT activists. Micah Fink's tremendously affecting The Abominable Crime—the title derives from the island's colonial anti-gay law labeling homosexuality as "the abominable crime of buggery"—takes a personal look at the situation there via its two main subjects. Maurice Tomlinson is a gay Jamaican LGBT activist who is married to a Canadian minister, and Simone Edwards is a single mother who was shot several times and left for dead, just for being a lesbian. Following continued threats on her life and the denial of a U.S. visa, Edwards boarded a plane for Turkey (for which Jamaicans don't need a visa) and sought asylum during a stopover in Amsterdam. The film keeps returning to film Edwards as she adapts to her new country and awaits reunification with the young daughter she left behind. Meanwhile, a persistently fearless Tomlinson, much to the consternation of his husband, continues the fight to repeal the island's anti-buggery law with the assistance of the British Lord who helped overturn anti-gay laws in Northern Ireland. The end credits reveal that anti-LGBT attacks in Jamaica have risen 400 percent since 2009. Another related doc worth checking out is Chris Belloni's I Am Gay and Muslim, in which a half dozen gay Moroccan men open up about living clandestine sexual lives and how they reconcile that sexuality with their religion. Director Belloni asks provocative, but respectful questions and receives some surprising answers from his uniformly educated, English-speaking subjects. 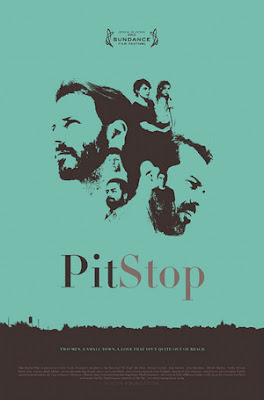 Moving on to Frameline37's narrative features, my favorite of those previewed would be Yen Tan's Pit Stop, a low-key yet emotionally complex drama about two gay men approaching middle age. Gabe (Bill Heck) is a building contractor who is still actively involved in the lives of his young daughter and ex-wife. Latino warehouseman Ernie (Marcus DeAnda) has just sent his younger live-in boyfriend packing. These two wounded—and ruggedly attractive—men move through life coping as best they can, and it's lovely when the film allows their paths to ultimately cross. Director Tan makes good on the promise exhibited in his second feature Ciao (Frameline32), with perfectly paced scenes, thoughtful camera placement and realistic dialogue (he co-wrote the screenplay). An added bonus is the refreshing blue collar Texas milieu in which the film takes place. The only other U.S. narrative I previewed was C.O.G., which represents the first time writer David Sedaris has permitted a film adaptation of his work. Glee's Jonathan Groff stars as the Sedaris stand-in, a priggish Yale grad who comes to rural Oregon seeking life experience and then tumbles into a series of gnarly misadventures. Despite assured direction from Kyle Patrick Alvarez and several engaging supporting performances, the film comes off curiously flat, suggesting that perhaps Sedaris' brand of humor works best on the written page.

Each year it's interesting to look through Frameline's World Cinema section and see where the majority of new LGBT films are coming from. Last year's edition featured an extraordinary number of works from the Muslim world and its diaspora, and two years before that we experienced a large presence from Latin America. After several years of underrepresentation, it appears that Asia is back in the game and colleague Tony An has done an excellent job of profiling the Queer Asian Cinema selections. The only one I've personally seen is Jun Robles Lana's Bwakaw, a somewhat broad but nonetheless endearing film which was last year's foreign language Oscar® submission from the Philippines. Veteran superstar Eddie Garcia, who has a whopping 556 acting credits in his IMDb profile, gives a memorable performance as a terminally cranky, gay retiree who softens when his pet dog Bwakaw develops a terminal illness. 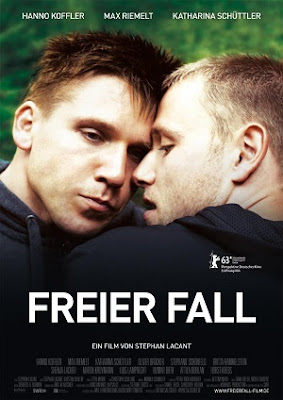 French language films are normally a significant part of Frameline's line-up, but not this year. I can only guess at why French-Canadian director Xavier Dolan's (I Killed My Mother, Heartbeats) acclaimed transsexual epic Laurence Anyways failed to make the cut, as well as Les Invisibles, the Cesar-winning documentary on French LGBT senior citizens from Sébastien Lifshitz (Come Undone, Going South, Frameline34). What we're left with is Belgian entry Beyond the Walls, a reasonably fun and sexy intergenerational/cross-cultural romance which becomes histrionic and ludicrous once the older partner goes to prison for drug smuggling. Moments of misconceived clunkiness also weigh down two otherwise fine European entries—Free Fall, a taut, well-acted drama about a pair of mutually attracted German police cadets, one of whom is married with a baby on the way, and In the Name Of, Frameline37's Centerpiece Film about a conflicted Polish priest who runs a facility for at-risk youth, which won the prestigious Teddy Award at this year's Berlin Film Festival. And finally there's It's All So Quiet, an enigmatic, but lumbering Dutch film about a joyless, middle-aged farmer which boasts a riveting performance from stage actor Jeroen Willems, who died shortly after filming and to whom the movie is dedicated. 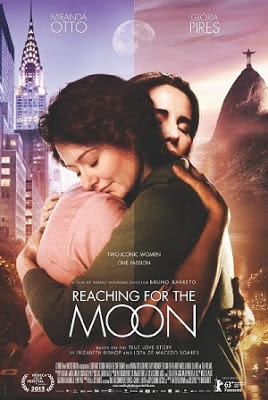 Elsewhere in the Frameline37 line-up are films I'm hoping to catch during the festival proper. I'm a sucker for biographical documentaries and don't want to miss profiles of writers Gore Vidal (Gore Vidal: The United States of Amnesia) and Paul Bowles (Paul Bowles: The Cage Door is Always Open), as well as Bay Area poet/filmmaker James Broughton (Big Joy: The Adventures of James Broughton). Other docs high on my list are Continental, about the NYC bathhouse that launched Bette Midler's career; The New Black, which examines shifting attitudes of African Americans toward LGBT rights, and Born This Way, a look at the fight for LGBT acceptance in Cameroon, which will hopefully be as good as last year's audience award-winning, Uganda-focused Call Me Kuchu. Brazilian director Bruno Barreto (Dona Flor and Her Two Husbands, Four Days in September) appears on the Frameline37 roster with Reaching For the Moon, dramatizing the 1950's romance between American poet Elizabeth Bishop and eminent Brazilian architect Lota de Macedo Soares. If I can summon sufficient stamina, I'd also love to experience Peaches Christ's Midnight Mass presentation of Nightmare On Elm Street 2: Freddy's Revenge, said to be the gayest of the Nightmare flicks, with a Peaches pre-show, costume contest and personal appearance by the film's star, self-professed male Scream Queen Mark Patton. Last but not least, I won't be missing Interior. Leather Bar, experimental filmmaker Travis Mathews and actor James Franco's meta-polemic re-imagining of the "missing" sex scenes from William Friedkin's 1980 film Cruising.