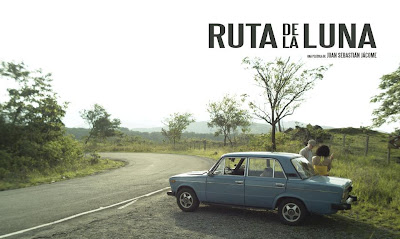 Ruta de la luna / Route of the Moon, dir. Juan Sebastian Jacome (Panama / Ecuador, 2012)—Tito, an introverted bowling champion must, suddenly and against his will, travel from his native Panama to San José in Costa Rica to take care of Cesar, his father who has fallen ill. They have a disaffected relationship. Cesar and Tito barely know each other. Tito's only wish is to go back to Panama as soon as possible to be able to participate in a Bowling Tournament, but Cesar has different plans for him. Official site. IMDb. Facebook.

The waxing phases of the moon (i.e., the “route” of the moon) provide a visibly-insured transformation in Juan Sebastián Jácome’s La Ruta de la Luna, which is having its world premiere at IFF Panamá on Sunday evening at the historic Teatro Nacional in Casco Viejo. Less assured is whether the contentious relationship between an overbearing Cesar (Luis Antonio Gotti) and his hectored son Tito (Yimmy David Suárez) will achieve resolution, desite their having to spend three days together driving back to Panamá from San José, Costa Rica.

Lost in his glory years as a “boxing trainer of champions”, Cesar is suffering from a heart condition and only his albino son Tito is available to look after him, albeit against his will. Tito would much rather be bowling. In self-denial about the seriousness of his condition, Cesar defies his doctor’s orders and exasperates Tito by doing everything he shouldn’t: jogging for exercise, insisting on a marathon drive of 13 hours, and picking up a stray young woman (Victoria Greco) and her filthy dog along the way. 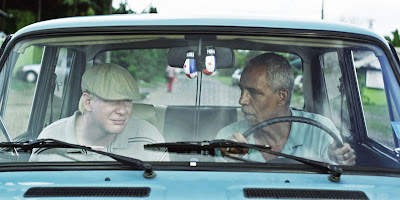 Yimmy David Suárez excels as the put-upon, petulant and irritable Tito who sleeps as much as he can to get away from facing the forced company of his judgmental father who, it’s assumed, has given Tito ample cause to be resentful. A philandering husband, Cesar was never around to help raise Tito. Embarrassed by his son’s albinoism, and traditionally machismo, Cesar mocks Tito’s masculinity, calls bowling “gay” and insists it’s not really a sport. But illness has made him experience momentary pangs of guilt for not being more supportive of Tito while he was growing up and so he latches on to Tito’s chance to compete at a bowling tournament as if prepping him for a boxing match. Tito, however, approaches bowling not as a competitive sport but more as a stress reliever. He prefers to play alone when the lanes are being polished, compensating for his bad eyesight by mastering technique and form. Cesar insensitively claims that Tito is not willing to compete because he’s “afraid to show his white face.”

Enter Yadia, a penniless young woman trying to get home to her family in Panamá. She quickly senses the tension between the two men and tries to defuse it through Panamanian superstition by making an offering of a pumpkin and a plucked hair from Tito’s head. The pumpkin, she explains, is to be left on the road so that it will be smashed by a car, releasing the tension. She tries valiantly to negotiate the pent-up animosities smoldering between father and son but ends up putting them into further competition for her attention and affection. It’s an unexpected near disaster that make father and son come to terms with each other, though by film’s end those terms remain irresolute and tentative, adding a poignant touch of reality to the narrative.

Juan Sebastián Jácome has a no-nonsense shooting style. His camera rarely moves and is, instead, meticulously placed to stress framing and planimetric compositions. Little movement occurs within the frames, which is curious for a film that is admittedly a road movie in which Cesar’s blue car becomes as important a character as himself, his son, Yadia, and the street cur. Towards the end of the film there is a sudden shift as the camera appears to be moving on curving roads, weaving through a rainy fog, which comes across as dream-like compared to the deliberate compositions up until then. Music by Xavier Muller greatly enhances the journey.
Posted by Michael Guillen at 4/28/2012 12:01:00 PM