HBO: GIRLS (Or a Generation and its Discontents)—By Ryan Lattanzio 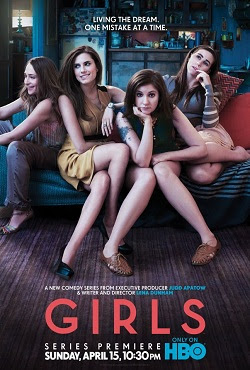 The sometimes painful, sometimes funny world of twenty-something sex is Lena Dunham's specialty, and her new HBO series Girls is the 25-year-old woman at the height of creative powers. She really is the voice of her generation, as her character Hannah, an unpaid intern at a New York publishing house, tells her skeptical parents. "Or at least a voice, of a generation." Dunham's self-deprecation is also her signature, and this self-consciousness is what raises Girls above an outmoded series like Sex and the City. And as much as I have endlessly enjoyed Michael Patrick King's mythic comedy, Dunham's show feels like a manifesto for Gen-Y. It's one for all the misanthropes out there who've worked for free, had a lot of sad sex and tried to navigate a society indifferent to their fashionable pessimism—and humanities degrees.

In 2010, Dunham was the toast of the town, having directed her debut feature Tiny Furniture, in which she also starred, about a recent Oberlin film studies grad who returns to New York to move back in with her bohemian artist mother and harpy, overachieving younger sister. Girls treads with equal deft in the terrain of post-undergraduate malaise, with more warmth and less affectation. But Dunham's worldview isn't a completely hopeless one. 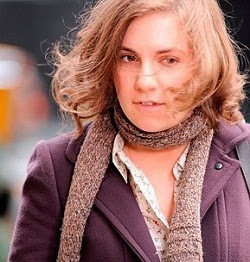 As a writer, director, artist and actress, Dunham is a masochist of the margins. She revels in her cynical temperament but also uses it as the means for a weirdly empowering, body-positive narrative. Dunham / Hannah loves darkness, but beneath her blasé exterior is an admirable sense of self-esteem. She knows herself, what she is and isn't capable of. Hannah has no "Special Skills," as she puts it in resume parlance, but her feelings of social uselessness are the makings of great art.

The Judd Apatow-produced Girls, which airs this Sunday (April 15, 2012), concerns Hannah (Dunham) and her gal-pals Marnie (Allison Williams), Jessa (Jemima Kirke) and Shoshanna (Zosia Mamet), who all lead lives of sexual and personal frustration in New York. There's no Carrie, Samantha, Miranda or Charlotte here. Dunham does away with comfortable archetypes, though her women are also lovably flawed. Unlike the Sex and the City girls, each of whom corresponds with a particular feminist (or not) position of the Y2K era, these Girls aren't so easily categorized. Their philosophies and issues often overlap, and the banter isn't as harmoniously timed as the SATC ladies' sex-glutted conversations at breakfast. But I'll stop comparing those shows. They are entirely different, and it would be an injustice to Dunham to suggest otherwise. Still, she has obviously seen the show as many times as I have.

Though Hannah chafes against her upper-middle-class privilege, she is unafraid to acknowledge how it inevitably enables her smart, quippy brand of self-loathing. My personal favorite line from the pilot ("It costs a lot of money to look this cheap") perfectly expresses the angst that comes with vintage-clothing-clad entitlement. Dunham is so good at these kinds of quick-witted maxims.

Like her character Aura in Tiny Furniture, Dunham's Hannah puts herself in degrading sexual situations. Her obtuse, self-important fuck buddy—an actor/carpenter—is a total dud, but trouble-loving Hannah willingly takes his verbal abuse. Maybe it will make for good memoir-writing material. She's writing one of those, a series of personal essays, which is one of the show's shrewdest, most of-the-moment bits of satire. 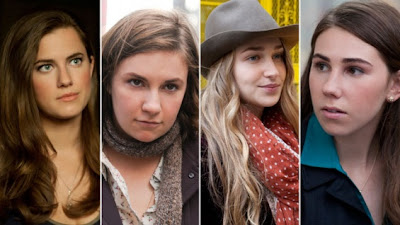 But it's not just erotic freedom that makes the girls in Dunham's harem the modern women of the times. Hannah bemoans her unpaid internship; Marnie is disenchanted with her doting boyfriend of four years and Jessa is a world traveling free spirit whose transitory life is thrown into confusion over a pregnancy scare. These age-related existential problems might not work for older audiences who "couldn't be paid to be 24 again," as Hannah's gynecologist says. But for someone with a pending liberal arts diploma and a general sense of "what the hell do I do now?" this series really spoke to me. I finally feel like I'm getting a real representation of my generation and its discontents onscreen.

Lately, I'd almost venture to say that TV is better than the movies. What elevates Girls above its sistren of gender-politics-flouting comedies is how cinematic, and hilariously tragic, this show really feels. And it feels real. Two episodes in, and I'm ready to tout Girls from the ramparts. Lena Dunham, here is my white flag.
Posted by Michael Guillen at 4/12/2012 08:31:00 PM