I first met producer-innovator Peter Katz in 2008 when he and his brother Evan L. Katz brought Adam Wingard's Pop Skull to San Francisco's IndieFest. We met in a grungy Tenderloin noodle shop to have a conversation. Subsequently, Peter kept in touch and we talked some when he was exploring the application of neuroscience to cinema (i.e., neurocinema), as detailed in Curtis Silver's write-up for Wired and Steven Kotler's for Popular Science. Katz was exploring if neurocinema could help genre filmmakers craft scarier films, as explained in his segment for CNN's The Screening Room.

Ever attentive to marketing trends, Peter recently contacted me to tell me about his 3-minute teaser reel for a proposed project Already Gone (2012) [Facebook], directed by Ross Ching, based on a feature script by Bill Balas, produced by Katz and Don Le, and starring Shawn Ashmore (Iceman from the first three X-men movies) and Harry Shum, Jr. (Glee). 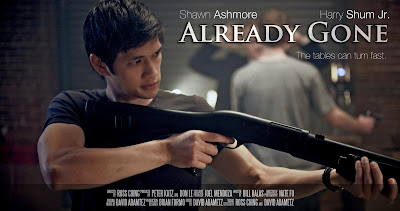 Compact, visceral and atmospheric, the Already Gone promotional short advances the "teaser first, movie later" marketing strategy centered on the concept that—as Hugh Hart states it for Wired—"one moving picture can be worth several thousand words when it comes to sounding out the sizzle of a fantastical tale." As Hart details, "The trailer-first, movie-later phenomenon works both ways. Would-be directors get a chance to show off their chops by creating DIY clips made with inexpensive video software. On the other side of the equation, busy studio types get a quick and easy-to-digest peek at what a project might look like on the silver screen, without committing to a big budget." Numerous success stories with this strategy abound: Tron: Legacy, Panic Attack, Iron Sky, Goon, several pitched as YouTube demonstrations of what these projects might look and feel like.

My thanks to Peter for being willing to hop on the phone to discuss his involvement with this 3-minute short.

Michael Guillén: Talk to me about this short sizzler you've produced to pitch Already Gone. 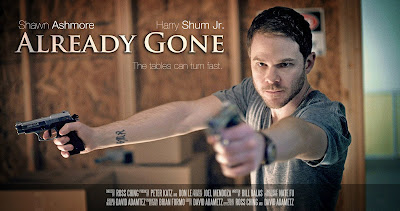 Peter Katz: I definitely want to make sure to establish that Ross Ching has done this kind of work in the past. He has this forte as a director to do short form content. He has a load of experience with doing commercials and has developed his own style. He comes from the position: "How can I create an interesting experience?" That doesn't mean he doesn't value his actors or what the project might become, but he wants to provide a cool experience from the kernel of an idea, from the tip of an iceberg. If an interested party were reading the full feature screenplay, it would have the dramatic story elements; but, in his short films he wants to encapsulate it all in a visualized experience.

Guillén: As one of the producers of this short film, did you approach Ching with this idea or did he approach you?

Katz: Well, Ross is a friend of mine and I hang out with him and with Don Le, another producer on the project, and since we're buddies Ross said, "Hey, I've been doing short form content and I'm looking for a feature screen play to do what I did with 3 Minutes (2011)." 3 Minutes had no screenplay; it was a short idea that turned out really well and he enjoyed doing it.

Ross said, "Let's mix it up a little bit. Let's film a script. Find me a script that's really action-packed and hyperkinetic." So I went onto this screenwriting site called Fresh Voices. They have really good taste and there's cool stuff on there. The guys who run that site really know their stuff. They sent me a lot of really good scripts. What caught my attention was a high concept idea of a criminal who robs other criminals, kind of how Dexter is a serial killer who kills other killers. That idea alone had a hook.

Guillén: I'm presuming your short was shot digitally as a cost-effective pitch to find financial backing for a full feature?

Katz: Yes, it was shot on The Red. What's going on is this: Don Le and I are producers on this and there's also an executive producer Joel Mendoza [Attraction Entertainment], so we all have relationships; but, the thing is, even if you're a friend of mine, if I send you a screenplay you're probably not going to read it. It's just a fact. People will read scripts if they really have to, but the key is how to present something that's accessible so you can pull people in? A short can capture the experience. When we first presented the short, we were covered by Wired [in a piece by Curtis Silver]. A short makes it easy for your idea to be communicated. How can you easily communicate a screenplay? You can't! Rather than have a producer interpret a screenplay, a director on a short film can show in a few minutes the kind of choices he will make with regard to, let's say, the action in a shot. Through that, anyone who wants to finance the film or any actors that might want to get involved, they can make a decision based upon this sampling of the director's vision.

Guillén: Exactly. Now, is this something unusual to approach a pitch this way? Are you one of the first to be doing this or is it part of a trend? 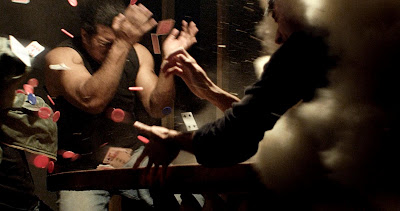 Katz: It's been done for a while. One of the first examples I'm familiar with was Saw, which started off as a short film. They sent in a VHS tape, back when people had VHS, and they said, "Hey, this is a project. This is the sense of it. Check it out." So it's been going for a while. More than anything, screenplays aren't easy to read. It's not like they're a graphic novel or a book. Someone can write a really beautiful script but it doesn't lend itself to being consumed easily. It takes more words because it has to be denser and detailed, but it's not laid out so the reader can lay back and relax. It usually takes more work to process it. So anything you can do to make it easier for me to process is better. The reason people want short films over a script is simply because it's easier to process and you can spread the idea around faster. If you're a financier and you have five other people you need to share an idea with, if you get a short film it's easier to do.

Guillén: It all sounds straightforward in concept, but looking at the credits for this short film, I'm amazed how large a crew was involved in putting this together. Did you finance it? How did you find the money to do the short? 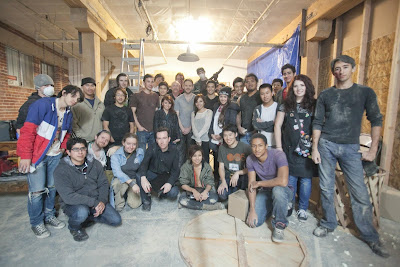 Katz: I can't put the number out but it was actually a very low budget. A few of the guys have all put a little bit of money in; but, there is definitely a lot of work that went into it. On Facebook, there's a picture of everyone involved in the project and it's a huge friggin' army of people who all volunteered. It was serious. There are stunt men involved and everything. But the thing is that it's a good inbetween. You know that as talent you're always doing something so if someone says, "Hey, we're going to film this in a day" it's a lot better than holding someone up for three or four weeks. When it takes only a day, then it's a fun thing you can do. It's not like a serious feature where your whole life is put on hold. After a day's work, you get to call it a day.

Guillén: Well, it's—as you said—a visceral way to experience an idea and to promote the sense of the atmosphere of a film and the visual style of the filmmaker, so I applaud you in the effort, hope you keep me abreast of developments, and certainly wish you luck with advancing to the feature.
Posted by Michael Guillen at 4/24/2012 10:05:00 PM