Along with the number of film festivals that seem to pop up each weekend here in the Bay Area, I've taken to frequenting two out-of-town film festivals—the Toronto International in early September (where I have an insider's chance to observe the SFIFF programmers cherrypicking films for the San Francisco International) and the Palm Springs International Film Festival the following January (where I try to second guess what they've actually picked). When the time comes (this Thursday!), my burden of choice is significantly reduced and I can manage my time exploring unforeseen pleasures that Graham Leggat and his programming team have found here, there and everywhere. For your perusal, my festival crossovers. 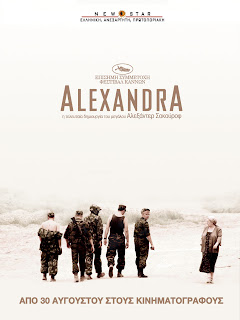 Alexandra—In my dispatch to Dave Hudson's Greencine Daily, I commended Galina Vishnevskaya's engaging performance in Alexander Sokurov's Alexandra, "wherein a lonely grandmother visits a grandson she has not seen in seven years. He has become a war captain stationed in Chechnya and—though at first he is delighted by his grandmother's visit—her disregard of military pride and protocol draws into focus the folly of his commitment to war. Throughout the film, Sokurov shows us the eyes of young soldiers as they respond to the presence of an old woman and they are the eyes of boys bewildered and angered by circumstances they cannot control. As she wanders through the military camp and then the nearby town, Alexandra's presence instills a desire for an old way of life where children respected and took care of their grandmothers, combing and braiding their grey hair." I highly recommend this stately and measured plea for peace. 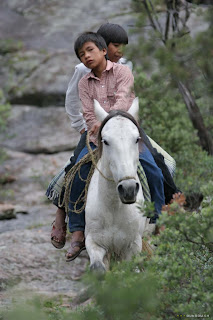 Cochochi—This gentle gem was aptly placed in the TIFF07 Discovery Program and I wrote it up for The Evening Class. This near-documentary first feature leans towards the ethnographic in its embrace of the indigenous. If your idea of a foreign film is to be taken into another world—one which is rapidly vanishing, I might add—then Cochochi will more than satisfy. In its economy it achieves a serene beauty. 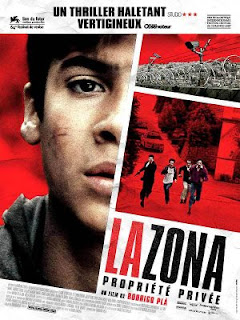 La Zona—As I dispatched to The Greencine Daily: "Paranoia and suspense pervade Rodrigo Plá's feature directing debut La Zona, which has already garnered acclaim at the Venice Film Festival. Experienced through the teenage sensibility of Alejandro (Daniel Tovar), his privileged life in a gated, guarded community is called into question when three young men from the abject ghetto of the surrounding city break over the wall into "La Zona". What ensues is an examination of lives under constant surveillance in an atmosphere of fear and distrust and the rule of mob mentality. It's like Shirley Jackson's "The Lottery" for the Mexican middle class with a touch of Invasion of the Body Snatchers thrown in to keep you running from your neighbors. Performances are solid and convincing all around with the welcome appearance of Maribel Verdú (last seen in Pan's Labyrinth) as Alejandro's mother Mariana." 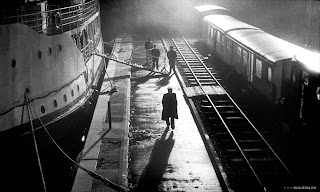 The Man From London—Also to the Greencine Daily: "I've heard disgruntlements with Béla Tarr's The Man From London; but, for my money (fortunately, not found in a valise), this lustrous film is the most accessible of Tarr's films I've seen. Based on Georges Simenon's novel, The Man From London configures suspense as a question of faith. It measures the gradations and degradations one is willing to indulge to escape the banal dissatisfactions of everyday life. And its spiritual assignment is to recognize that it is in the performance of our everyday tasks that our radiance shines through. Our protagonist, Maloin (Miroslav Krobot), hasn't yet achieved that recognition and—as a consequence—is irremediably tempted by an unexpected windfall; namely, a suitcase full of stolen money.

"Tarr assures me the resemblance of this plot device to that used by the Coen Brothers in No Country For Old Men is completely coincidental, though contributing to that coincidence is that I watched both films back to back. Man From London's black and white cinematography and sinuous camera movements shimmer with brilliance as they maneuver confined spaces. My only complaint might be that hearing Tilda Swinton dubbed in Hungarian pulled me right out of the film, though it's clear why her high cheekbones and beseeching eyes were cast. Visually, she contributes to Béla Tarr's ongoing quest for a pure cinema of meta-narratives expressed through the eyes; the greatest storytellers of all."

Further, I had the rich opportunity of interviewing Béla Tarr for Greencine's main site. I regret he's not accompanying the film to San Francisco. It would have been a pleasure to be intimidated by him again. 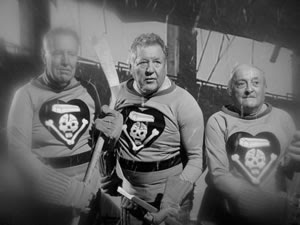 My Winnipeg—Having the opportunity to watch this hilariously haunting film in Toronto's Edwardian Winter Garden Theatre with Guy Maddin narrating live was a peak moviegoing experience and I didn't hesitate a second purchasing tickets for the SFIFF screening. Though he swore on the Winter Garden stage that he would never narrate the film live again, I'm keeping my fingers crossed that Graham Leggat's considerable charm will convince him to do otherwise. An absolute must-see! You will laugh yourself sick with joy. 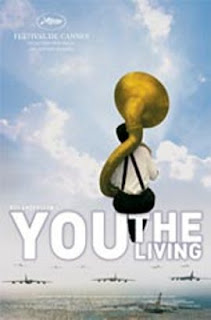 You, the Living—Jonathan Marlow convinced me to see this film and it was my fifth press screening of the day late at night. Its dour humor and dim palette were more than I could handle so I walked out. I have felt guilty ever since and feel compelled to give Roy Andersson's film one more chance. Perhaps I'll appreciate it better on a second go-round? But don't hate me if I emerge with staged ambivalencies.

Leave Her to Heaven—I never miss an opportunity to watch Eddie Muller introduce a film he loves. Anticipating his enthusiasm, I researched the film for The Evening Class and I encourage anyone who hasn't seen Gene Tierney in this Technicolor marvel to feast on her lavender eyes and her murderously green jealousy.

Mongol—Having caught the North American premiere of Shinichiro Sawai's Aoki Ôkami: chi hate umi tsukiru made (Genghis Khan: To the Ends Of Earth and Sea, 2007) at the 10th annual San Francisco Asian Film Festival, I felt primed to dive into Sergei Bodrov's historical epic Mongol (there's something to be said for a succinct title) and was keenly aware that Bodrov is telling only the early part of Genghis Khan's remarkable rise to power. Rumor has it—and I hope it's true—that Mongol is the first of a trilogy. I'm surprised to see it billed as a West Coast premiere at SFIFF51 when it screened earlier this year at Palm Springs; but, perhaps I should just write that off as a minor detail? My favorite scene: thundering hordes of Mongols raging towards each other as thunderclouds collide above! Visually powerful, the film will likewise attract fans of Tadanobu Asano.

Solitary Fragments—This film's spatial complexity and split screen design warrants a second viewing to appreciate the film more fully and to articulate its presiding themes. It's an absolutely consummate piece of craftsmanship, like a piece of architecture whose interlocking design requires circumambulation. It's truly one of the most interesting films I've seen in the last year. For those who need further prompting, I wrote up a critical overview for my PSIFF08 Cine Latino preview. 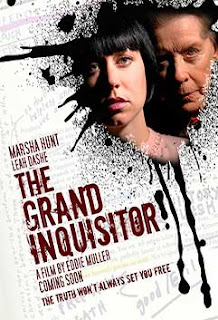 The Grand Inquisitor—Let it be known that, along with knowing how to introduce a film, Eddie Muller knows how to make one, and to unabashedly pull a favor or two to get it included in SFIFF51's "Feminine Mystique" collection of shorts. Hey, if you know how to work it: why not? Besides, the film deserves to be seen by a new audience after its triumphant premiere at Noir City 6 earlier this year. I wrote that event up for The Evening Class.

Madame Tutli-Putli—I don't care what anyone says, this remarkable animated short—included in SFIFF51's shorts program "The Human Kingdom"—was robbed of the Oscar it deserved. Judge for yourself; but, above all, don't miss it. Once you have, wander on back to The Evening Class to read my interview with animators Chris Lavis and Maciek Szczerbowski.

Michael, I think the festival is using a very narrow definition of the term "coast" when they bill some of this year's offerings as "west coast" premieres. A couple of Sundance films (e.g. The Wackness, Secrecy) are similarly billed. No one considers Park City, Utah, to be on the coast, but you'd think that Palm Springs, although it isn't quite as near to the ocean as the Kabuki cinema, would qualify. Oh well, not a big deal.

By the way, I agree with you on The Man from London. It may not be among Tarr's greatest films (I can't say, since the only other one I've seen is Sátántangó), but it's certainly a sight to behold.

So Rob, have you figured out your schedule yet for SFIFF51? I'd be intrigued to know what you're catching.

Hey Michael, I appreciate the kind words and the plug for my intros and film, but just to clarify -- my film was submitted to SFIFF's selection committee (with the attendant fee paid) and was chosen for inclusion sans any schmoozing on my part... People may think otherwise, which I understand, but I like to think it was picked on merit. Also, I won't be doing the intro for Leave Her to Heaven -- that'll be Noir City's good pal Schawn Belston from 20th Century-Fox, who'll explain how the restoration was accomplished. Thanks for the attention!

Thanks for being such a good sport, Eddie. I was--of course--teasing. Sometimes I play too rough. I hope I didn't offend.

Indeed I have. My overview is coming soon.