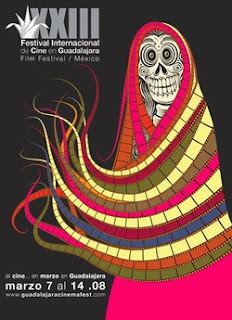 The Evening Class sent Sergio de la Mora to the Guadalajara Film Festival this year and our man-in-the-know has returned with his first report. Take it away, Sergio!

* * *
The 23rd edition of the Guadalajara International Film Festival closed March 14 after having screened 247 films from 38 countries across 9 days that were attended by an estimated 81,000 spectators. The festival's director, Jorge Sánchez Sosa, a veteran film producer (Danzón, Cronos, El evangelio de las maravillas [Divine]), affirms that it is now the most important film event in Iberoamerica. This opinion probably has much to do with the funding awarded to films in competition, totaling this year at $782,000, the well attended film market which this year offered 579 titles seeking distribution, the number of celebrities, international industry and film festival representatives, and journalists in attendance as well as the number of parallel events.

No doubt the overall quantity, quality and breath of films exhibited was among the festival's best. Especially exciting was the retrospective on Argentine cinema that in large part is due to the leadership and vision of programmer Lucy Virgen. However, the festival could use more programming focused on new cutting edge work in addition to honoring pioneers such as this year's focus on such luminaries as Argentine directors Fernando Birri and Fernando Solanas, the Mexican producer Bertha Navarro and classic period Mexican comedian Germán Valdes "Tin Tán."

If one were to judge the state of narrative Mexican cinema by the quality of the 12 films in competition this year, the scene would not be promising. Perhaps an omen of the less then vibrant Mexican film selection was the withdrawal of the incredibly prolific Julián Hernández's fourth feature Rabioso sol, rabioso cielo (Enraged Sun, Enraged Sky) because it was not completed on time but may well have been pulled in order to be considered for Cannes. I should know after so many visits to this festival that what gets shown in Guadalajara is not the best of new Mexican cinema but simply what is not committed to other festivals in early spring. This is a festival where independent films are often short changed while films co-produced by IMCINE, the government-funded film agency, are featured prominently. Oftentimes the most interesting work is made outside of official structures, in the independent sectors. Notable cases would be the films of Carlos Reygadas, Amat Escalante (Sangre [Blood] 2005), Rubén Imaz (La familia tortuga [The Turtle Family] 2006), Pedro Aguilera (La influencia [Influences] 2007), Alan Coton (Soba [Beaten] 2004), and Carlos Armella and Pedro González-Rubio (Toro negro [Black Bull] 2005).

Desierto adentro, a gripping work about religious fanaticism patterned after the life of Soren Kierkegaard, is set during the 1926-1929 Cristero War, a backlash to the anti-clerical elements of the Mexican Revolution, which saw Catholics (mostly poor) taking arms in defense of the Church, its privileges and their beliefs. It may well be the best fiction film about this still controversial and tragic episode in Mexican history. Elías (Mario Zaragoza), a peasant, is convinced that since he contributed to the death of a priest and refused to fight against the government, his entire family will be punished. The curse begins with the death of his wife (Dolores Heredia) while given birth to their last child, Aureliano. After the war, he sets out with all his children to build a church in the middle of a desert-like region in order to honor God and wait for a sign from Him indicating forgiveness.

Desierto adentro uses a voice-over narration by the youngest child Aureliano, played by Diego Catano (a lead in both Temporada de patos and Lake Tahoe), who spends his childhood imprisoned in the family home because he is supposedly ill. This film is far superior to Plá's Venice International Film Festival winner La zona (The Zone, 2007) in terms of his capacity to sustain narrative suspense, create a vivid atmosphere, imagine a highly inventive use of animation in the form of retablos (religious folk portraits), and its critique of religious authoritarianism. (Plá filmed Desierto adentro before La zona but did not finish it until recently). Not since Arturo Ripstein's El castillo de la pureza (The Castle of Purity, 1972) has a Mexican film so effectively taken on the self-destruction of a family as a result of the patriarch's blind piety. 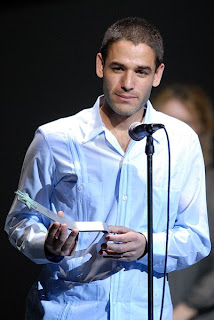 This year the Mexican narrative film competition was especially heavy with second features. Certainly, one of the most anticipated was Eimbcke's Lake Tahoe that premiered at this year at the Berlin International Film Festival where it was awarded two major prizes. To his credit Eimbcke lives up to the expectations of his debut feature, Temporada de patos. Like the latter, Lake Tahoe is a minimalist deadpan comedy in terms of narrative scope and aesthetics. On the outskirts of a quiet city on the Yucatán Peninsula, the teenage Juan (played by Diego Cataño) crashes his car into a telegraph pole on an empty street and spends the majority of the film looking for the necessary spare part. In the process he meets a number of eccentric characters, all spare parts workers including a distrustful and grumpy old man, don Heber (Héctor Herrera) and his dog Sica; Lucía (Daniela Valentine), a spunky and young punk rock single mother who chain smokes and is smitten by Juan; as well as David (Juan Carlos Lara), a skinny youth into martial arts philosophy and a Bruce Lee fanatic. 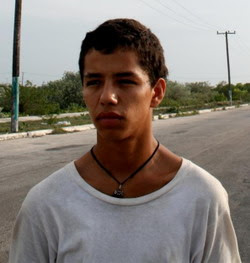 Halfway through the film, we find out about the recent death of Juan's father, so it's no wonder that Juan spends a good deal of the film running around in an attempt to evade this loss and flee from the desolation of his home where his mother has locked herself in the bathroom to cry and smoke and his younger brother prefers to camp out in tent in the front yard rather than stay in the house. Alexis Sabé's color cinematography, predominantly long stationary shots with wide angle lens, and black screen dividers eloquently illustrate a narrative that is spare in dialogue. The long widescreen shots emphasize Juan's sadness, vulnerability and his being lost. The film is genuinely engaging, the characters are ingratiating and memorable. A story told through images, Eimbcke is triumphantly successful in creating "pure cinema," as he intended. Both Lake Tahoe and Desierto adentro are intensely personal, auteur films that represent among the most vibrant tendencies within Mexican cinema.

Sergio! very nice job, I agree, well most of us agree that both Eimbcke and Pla were the heart of the festival.

As always I focused my festival experience of the mexican movies, but my favorite came from Costa Rica! I think I've seen like 2 films from this country in all my life. "El Camino" by Ishtar Yasin was the very best film of the fest.

From Mexico, Lake Tahoe should've won more prizes, but The Desert Within is a solid film that will for sure travel to many festivals this year. Conozca La Cabeza de Juan Perez es the best debut, I enjoyed its homage to the mexican comedies during the golden age, they just want to entertain.

Carlos, what a wonderful informed response, as ever. Thank you very much. On your list, I haven't seen any in the "excellent" category but my antennae are quivering. Cochochi I caught at the Toronto International and it's on the line-up for our San Francisco International so I might catch the chance to see it again. In the "Meh" category (what's "meh" mean anyway?), I've seen the Gabriela spoof on telenovelas, which had some qualities I liked but overall didn't satisfy. It did win, however, the audience favorite at this year's Cinequest in San Jose, so that means something I guess.