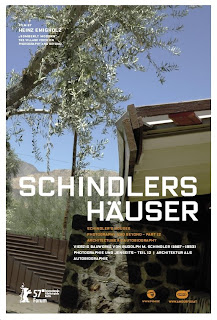 "Architecture projects space into this world. Cinematography translates that space into pictures projected in time. Cinema then is used in a completely new way: as a space to meditate on buildings."—Heinz Emigholz

I thought I was going to have my work cut out for me when I decided to preview the Pacific Film Archive's Heinz Emigholz retrospective—"Architecture As Autobiography"—which broke ground with the April 1st screening of his "salvaging study" Goff In the Desert (2002-2003), and continues through April 17 with screenings of Schindler's Houses (2007), Sullivan's Banks (1993-2000), Maillart's Bridges (2001) and his latest Loos Ornamental (2006-2007). Emigholz is scheduled to attend all upcoming screenings.

Making my self-appointed assignment much easier is the fact that the retrospective is currently in progress—in an enviably expanded itinerary—at multiple venues in Los Angeles, with thorough previews already in place by the likes of Doug Cummings for Film Journey, Scott Foundas for the L.A. Weekly, and Shana Ting Lipton for the Los Angeles Times. Here in the Bay Area, Maria Komodore (San Francisco Bay Guardian) and Max Goldberg (Flavorpill) have likewise already weighed in.

As PFA program curator Kathy Gertiz writes: Since 1984, German filmmaker Heinz Emigholz has been working on an acclaimed series, Photography and Beyond, which consists of formally rigorous, revelatory films that examine artistic creativity. Through his films focused on the work of architects, Emigholz states, he "looks at architectural spaces that I believe have been sorely neglected by 'architectural history.' " We present five of these salvaging studies. Three trace a history of direct influences: Rudolph M. Schindler (1887–1953) studied with Adolf Loos (1870–1933), who was influenced by Louis H. Sullivan (1856–1924). Emigholz's cinematic "archives" of these architects' existing buildings, with minimal commentary, provide a rare opportunity for careful contemplation and study of the space, light, and materials of architecture. "I believe that everyone perceives space differently and that art and structure arise out of the perception of these nuances," Emigholz says. "The world reveals itself to us, and we show each other the world—not just different facets, but our different views. During peacetime, this is an endless process that deserves to be loved."

Emigholz might as well have been quoting Louis Sullivan who wrote in his 1906 essay What Is Architecture: "In everything that men do they leave an indelible imprint of their minds. If this suggestion be followed out, it will become surprisingly clear how each and every building reveals itself naked to the eye; how its every aspect, to the smallest detail, to the lightest move of the hand, reveals the workings of the mind of the man who made it, and who is responsible to us for it." Elsewhere, in his wry critique of King Vidor's The Fountainhead for Cinema Scope, Emigholz does quote Sullivan: "It is the pervading law of all things organic, and inorganic, of all things physical and metaphysical, of all things human and all things superhuman, of all true manifestations of the head, of the heart, of the soul, that the life is recognizable in its expression, that form ever follows function."

Along with the opportune fortune of watching Emigholz's rarely-seen films, is the anticipated pleasure of hearing him speak. In his Cinema Scope essay, Emigholz amusingly details the conflict between "the arrogant European values" of Austrian rivals Josef von Sternberg and Richard Neutra on one hand and their "robust American theories about imagined spaces" on the other. The house that Neutra built for von Sternberg—"From the air, [it] looked rather like an aircraft carrier [that] later became a popular landmark for American Marine test pilots"—eventually sold to novelist Ayn Rand. In gist, this real estate transaction establishes the foundation for Emigholz's profile of Rand and his survey of King Vidor's 1949 cinematic adaptation of her bestselling novel The Fountainhead—"a thriller set in the world of architecture." If his Cinema Scope essay is any indication, Emigholz promises to be an intriguing and entertaining speaker.

Likewise, in his conversations with Siegfried Zielinski, Marc Ries, and Stefanie Schulte Strathaus, Emigholz reveals a remarkable, observant, nearly difficult intelligence whose perspective will clearly enrichen those willing to watch and listen. I'll be all eyes and ears. How about you?
Posted by Michael Guillen at 4/06/2008 04:43:00 PM