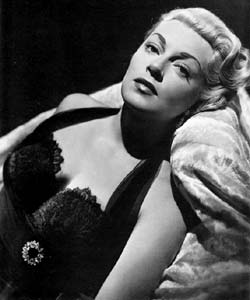 "For the record," Robert Osborne informs for Turner Classic Movies, "she preferred her first name pronounced—not to rhyme with 'Anna' or 'banana'—but, more purringly 'Lawn-a.' "

Lana Turner. The name itself conjures up a precious gem in its glamorous setting and Flickhead has invited those interested to comment on their favorite facet. But they all sparkle, don't they? Sparkle and glitter and shine. It's hard for an old crow to choose.

Lana first entered my consciousness via my mother's love for watching women's melodramas mid-afternoon on the t.v.—Peyton Place (1957), Imitation of Life (1959), Madame X (1966)—then progressed into my later interest in film noir crime romances and Hollywood ambition dramas—The Postman Always Rings Twice (1946) and The Bad and the Beautiful (1952).

"If the Postman delivered anything," Flickhead writes so lovingly, "it was Lana inconceivably cast as a roadhouse hash slinger (!), radiant in open-toed shoes, white blouse and shorts, her beautiful bare legs held in awe by the lens, and those vacant, faraway eyes framed by a turban."

Even as a teenager my prurience was piqued by Lana's voluptuous body in compromised situations, tethered by middle class ethics, chafed by small town gossip, in love and ravaged by men she shouldn't be in love with, irresistible, a femme fatale, an unwilling adulteress with desires beyond her control. Little did I know that Lana Turner's personal life was no less dramatic than her roles on screen. 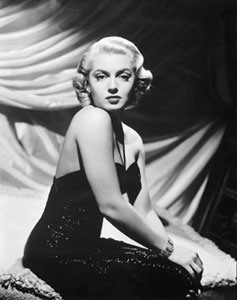 Recently I watched Carole Langer's original TCM documentary Lana Turner: A Daughter's Memoirs, narrated by Robert Wagner with commentary by Lana's daughter Cheryl Crane, Imitation of Life co-star Juanita Moore, dramatic coach Lillian Burns Sidney, make-up artist Del Armstrong, and friends Robert Stack and Evie Wynn Johnson. I've not seen a better documentary on Lana Turner than this one. It continues to pique my prurience with its eye for biographical detail. Fortunately, for those who didn't catch it when it first cycled around, Lana Turner: A Daughter's Memoirs is being reshown by TCM on Monday, August 14, 2006, as part of a mini-retrospective, which includes Rich Man, Poor Girl (1938), Dancing Co-Ed (1939), Two Girls on Broadway (1940), Honky Tonk (1941), Johnny Eager (1942), Marriage Is A Private Affair (1944), Weekend at the Waldorf (1945), Green Dolphin Street (1947), Homecoming (1948), Betrayed (1954), Imitation of Life (1959), and Madame X (1966). A pity we couldn't have timed this blogathon with that TCM mini-retrospective though undoubtedly what I read during the blogathon will enhance my viewings mid-August.

Lana Turner's "playgirl" status and her laundry list of lovers is recalled by best friend Evie Wynn Johnson and confirmed by Robert Stack, who insists Lana was only trying to express herself. Her make-up artist Del Armstrong relates how, during his absence, she did her own make-up for The Postman Always Rings Twice. She meticulously achieved necessary perfection. So I'm not sure I agree with Flickhead's assessment that Lana Turner didn't possess "the self-assurance to comprehend and arrest the caricature and self-parody that lay at her disposal." I think she did. And I think it was because she did that she was able to survive as a Hollywood star for so many decades, especially with such bad luck (i.e., husbands). 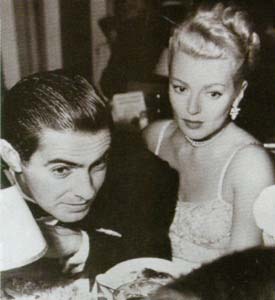 And what bad luck!! Seven ways from Sunday. From Steven Crane, Cheryl's father, marrying her without remembering to divorce his previous wife. To Fernando Lamas who punched Lana out for flirtatiously dancing with Lex ("Tarzan") Barker. To Barker who ended up revealing himself a pedophile, molesting Cheryl for years before Lana found out and banished him. Tyrone Power was the man who got away; the one man Lana truly loved and couldn't have for a husband. Power's double standards were starched as stiff as his shirts, he didn't like that Lana was so much like him. But it was her ill-fated marriage to Mafioso Johnny Stompanato, henchman to Mickey Cohen, that led to "the incident" where Lana's daughter fatally stabbed Stompanato during a domestic squabble on Good Friday. Cohen paid for Stompanato's funeral but ordered a cheap coffin and sold Lana Turner's love letters to the press. The documentary's exploration of "the incident" told from Cheryl Crane's point of view, and her lesbianism, are some of the documentary's most lurid—and fascinating!—commentary.

The tension between Stompanato and Lana, ignited by previous abuse, amplified when Lana refused to have Stompanato accompany her to the Academy Awards when she was nominated for best actress for Peyton Place, taking her mother and daughter instead, and relations worsened until Stompanato ended up with a knife in his gut, staring at his step-daughter, saying, "My God, Cheryl, what have you done?" 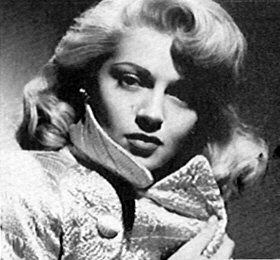 The footage of Lana Turner's defense has been hailed as one of her best performances and I'm inclined to agree. If anything, the incident solidified her career, even as it drove Cheryl to torment. Juanita Moore has a touching remembrance of Lana arriving on the set of Imitation of Life for their deathwatch scene where Moore's character dies. When Lana finally lets herself go and wails in anguish at the death of Moore's character, it came as a primal cry from deep within her that started a three-day crying jag. When she finally returned to the set her face was swollen with grief. It wasn't just for the cameras that Lana was crying.

06/29/06 ADDENDUM: Contributors to the Lanathon include:

Master of Ceremonies Flickhead on Lana's career at Flickhead

Peter Nellhaus on The Sea Chase at Coffee, Coffee ... And More Coffee

Campaspe compiles a compendium of peer insights at Self-Styled Siren

07/02/06 ADDENDUM: I'm still catching up on my reading! Alex Billings at Stillettos and Sneakers delivers an informative tribute complete with great photos, trivia, and Lana quotes (my favorite: "I planned on having one husband and seven children, but it turned out the other way around."

Sheila O'Malley at The Sheila Variations celebrates Lana as well and engenders much discussion.

Nice remembrance! She touched so many of us. And thanks for the TCM alert this August -- Lanamania!

I'm glad I could offer up that little morsel to your "Lanathon", Flickhead!! I look forward to reading the other entries.

I loved your Lana Turner entry! You pointed up a lot of things I'd forgotten and summarized her life and career beautifully. A great contribution to the Lana-Thon.

Thanks, John. I encourage my own readers to hop on over to John's site Greenbriar Picture Shows where he writes up "Marriage Is A Private Affair", and includes some fantastic photos, and tasty tidbits (Tennessee Williams worked on the screenplay).

She was always wonderful, but one of my favorite films of hers was an early one, "Slightly Dangerous."

Hmmmm, don't know that one, Carole, thanks for bringing it to my attention. And thanks for stopping by to comment.

I came face to face with Lana Turner as she prepared to film a scene for a movie called "Witches Brew" in the early 70's on Robertson Blvd. in West Hollywood. As I aimed my camera, her manager Taylor Pero gestured "No Pictures" but I had already snapped. I still have the picture. She is wearing a white dress, Taylor is carring her white fur and her hair dresser, Eric Root, is carrying her drink. Her dressing trailor can be seen in the background. I got to know Taylor during those years of the 70's and 80's and he was nice enough to have Lana sign an 8x10 picture for and to me. He was never anything but a gentleman, very polite and polished. I'm sure Lana was lucky to have him for those 10 years. His book "Always Lana" is hard to put down and I have read it numerous times through the years, each one like the first time. Extremely well written. I don't know why people read novels when real life stories are so fascinating and sometimes more hard to believe. I was never a great Lana Turner fan but "Imitation of Life" is one of my all time favorite movies and I have had a copy at home for years. I also met and have a picture with her daughter Cheryl Crane at her book signing. I never did get a picture with Taylor and I'm sorry I didn't, but I remember him very fondly.