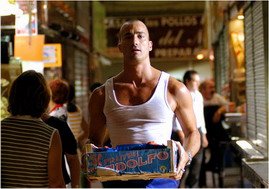 It's a pity 20 Centimeters is screening at the Victoria Theater and not the Castro, where it rightfully should be seen. It deserves the Castro's big screen, especially since—as Robert O'Shaughnessy has implied in the program capsule—it's competing for the "most outrageous musical crown" now reserved for the Frameline favorite, Yes Nurse! No Nurse! The Victoria Theater and the Castro Theatre are not an equal playing field.

O'Shaughnessy writes: "Veteran Spanish filmmaker Ramón Salazar draws upon the conventions of the over-the-top Hollywood musical to tell the raw, dramatic and often hilarious story of Marieta (Mónica Cervera), an unforgettable transvestite with transsexual dreams and a '20-centimeter problem.' " Clearly, it ain't easy being a hung woman, and the full frontal image of Marieta leaning against a wall with developed breasts and a big dick registers as singularly iconic on the altar of evershifting queer bodies.

"To complicate an already challenging existence," O'Shaughnessy continues, "Marieta has narcolepsy and is prone to fall asleep without warning at any moment. In these unexpected moments of sleep, Marieta enters a fantasy world where Madrid becomes the magical stage of her leading-lady dreams." Shades of My Own Private Idaho … with a dress and heels! Her narcoleptic fantasies are energetically choreographed; the mash-up of Felipe Valdez Leal's "Tu Solo Tu" and Mike Hawker / Ivor Raymonde's "I Only Want To Be With You" being especially noteworthy.

Marieta's narcoleptic seizures prove seductive as well. While ogling El Reponedor (Pablo Puyol), a hot and hunky fruit stocker, she passes out, is rescued by him, and wakes up to find him gleefully sucking her off. Variety's Jonathan Holland—though conceding Puyol is "peachy-buttocked"—complains "the one-dimensional Puyol disappoints." Jonathan?!!! Wake up!! There is nothing disappointing about Pablo Puyol! He is the sexiest butch bottom I have ever seen on screen. You can almost smell the heat of his pleasure. And the poignance of his being so cock-fixated that he can't support nor respect how big Marieta's dreams are is not an unfamiliar theme in this hungry town.

Several critics have enjoyed 20 Centimeters exactly for what it is. Adam Nayman from Eye Weekly calls it a "balls out spectacle." The actual plot, Nayman admits, "is just a flimsy structure on which to hang her spectacular subconscious production numbers. And why not? They're bright, imaginative and fabulous." 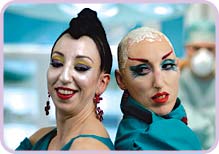 "The film's story may be slight," Ed Gonzales at Slant concurs, "but Salazar's sparkling tribute to an alternative lifestyle and unconventional female beauty is liberating." He elaborates: "Salazar's humor is … cruder and less affecting than Pedro Almodóvar's, but his love for women is touching: The film's best scene is a fateful encounter between Spanish cinema's homeliest divas—Monica Cervera, as Marieta, and Rossy de Palma, as a fellow prostitute who's been around the block one too many times—and Marieta's apartment complex is a colorful nucleus bursting with the spastic energy of hot-tempered trannies and abuelitas, a dwarf, and Spain's answer to the snaggle-toothed Edith Massey."

Bravo! Your review of 20 Centimenters is right on the mark! I was wowed by it when I saw it in Madrid when it first played. Unfortunately, the prudish attitudes of the Spanish film establishment and, sadly, of the Spanish moviegoing public too, prevented the film from being received as well as it should have. I will be including 20 Centimeters in my Spanish film class. I will also be using your review. Thanks! - Harry Vélez Quiñones