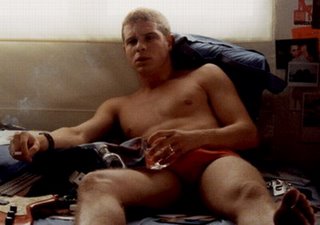 The film opens with a slow, sensual kiss of two young men—Pedro and Rui—very much in love, celebrating their one-year anniversary by exchanging rings inscribed with "two drifters" after Mancini's "Moon River", their song. Pedro drives off and is immediately killed in an automobile accident.

Contemporaneously, a troubled seductive young woman, Odete—who lends her name to the original title of the film—is abandoned by her lover after admitting she wants to wed and have a child.

Watching Portuguese director João Pedro Rodrigues' Two Drifters (aka Odete), I am reminded of Djuna Barnes' Nightwood query: "Watchman, what of the night?" Rodrigues has claimed night's terrain as his mise-en-scene within which he frames the fractured passions of obsessed psyches. Steve Jenkins has it right in the program capsule when he states that Two Drifters is effected "[w]ith a cool eye and a unique understanding of the hold placed on the living by the dead." It's never made clear whether the dead accomplish that hold through the possessive memories of the living or whether the living are obsessively manipulated by the dead. A soul wind periodically blows throughout this film, signaling supernatural influences and fateful guidances.

Two Drifters screens at the Castro Theatre on Thursday, June 22, at 10:30 p.m. Possibly already another sellout. Without question, some of the best Frameline has to offer this year is its Latino fare.
Posted by Michael Guillen at 6/16/2006 11:38:00 AM