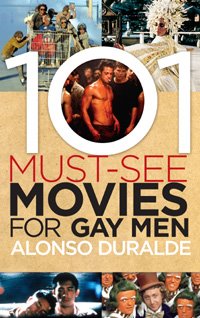 As an exercise to help promote and sell copies of his recently-published film guide 101 Must-See Movies For Gay Men, Alonso Duralde's Saturday film clip lecture of the same name at the Roxie Film Center was effective—he sold every copy of his book that he brought to sell out on the sidewalk in front of the theater—and rightfully so! Duralde's 101 Must-See Movies For Gay Men is wittily written, insightful, and deserves a wide readership. I wasn't fast enough to catch one outside, had to walk down to Different Light on Castro to secure my copy, but have been enjoying it a lot since. It's fun!

For me Duralde's book is more 101 Movies For Gay Men I Have Seen, which feels nice actually, confirming a method to my cinematic madness, reminding me that watching queer film has really been one of those cultural processes limned with history in which many of us have taken part in a shared growth. His book also reminds me that we have gone to the movies not only to seek representative images of ourselves—whether masked in metaphor, or up bare in your face—but also to find scripts, words to remedy the regretful wit of the staircase or to escape invisible silence; the verbal weaponry of memorable one-liners. "Life is a banquet and most poor suckers are starving to death!" "Fasten your seat belts, it's going to be a bumpy night!" "I am big! It's the pictures that got small." Along with his insightful plot synopses Duralde offers choice lines from each of his must-see movies as well as delicious trivia. I was delighted to find out Roger Ebert wrote Russ Meyer's Beyond The Valley of the Dolls, and that Lupita Tovar is the mother of Chris and Paul Weitz!

So why was I mildly (not wholly) disappointed in the film clip lecture? It wasn't the content—which faithfully tracked with the book—but more the sense that Alonso wasn't allowing himself to shine. I know it's just a pet peeve of mine, but I much prefer extemporaneous speaking over hiding behind notes. It wasn't like this was unfamiliar material to Duralde, he was in effect quoting from the book he'd written, so why not just say it? Why not speak from what he knows? Why read it? Further, technically, he didn't need to project his chapter headings, often preceded by enough space to drive a 16-wheel truck. What would have been the harm in just announcing his themes and moving the program along at a steady clip?

I considered the possibility his lecture format might be an early rehearsal of an intended documentary, but, afterwards he admitted he didn't have rights to any of the clips, was probably already pushing fair use, and a documentary was most likely out of the question. So my suggestion to Alonso would be to stash the notes, memorize his jokes, do away with the projected chapter headings, and be the wry, erudite film critic we have come to know and love. I know he can do it. He's one of the most engaging talking heads in Fabulous! The Story of Queer Cinema.
Posted by Michael Guillen at 6/18/2006 11:48:00 PM