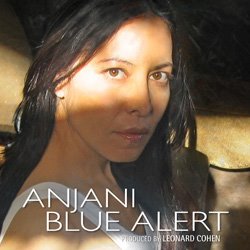 I sometimes feel I should wear a t-shirt that reads: "I have survived melismatics." Anjani exemplifies that celebrated survival with her spare—yet rich!—renditions of Leonard Cohen on their recent collaboration Blue Alert, which like Jennifer Warnes' Famous Blue Raincoat reminds that Leonard Cohen writes poetry that the best voices wish to sing and that every now and then, unexpectedly, he shows up again with new beauty to share. The expectant choir drools.

Tired of choosing desire
I've been saved by a blessed fatigue
The gates of commitment unwired
And nobody's trying to leave.

I merely wanted to mention Blue Alert because I am still befriending her as a moodpiece and do not want to scare her away with facile equations; I prefer our getting-to-know-each-other dalliance for now. What I will comment upon is the photograph on the back cover—taken by Lorca Cohen, I believe—of Anjani and Cohen sitting side by side drinking cups of coffee. Anjani is looking over bemusedly at Cohen who is blurred out-of-focus so that you cannot distinguish his face. I thought, ah yes, how clever, to efface oneself just enough to promote a protégé. To efface oneself just enough to promote the music, not the man. And yet at the same time, admittedly it's a modest folly because there are some men who are music, just as they live and breathe, their talents inseparable, their poetry prescribed like veins beneath the skin and the questing blood that explores through them.

At one of Leonard Cohen's websites there's a link to his collaboration with Anjani. If you follow that link you'll find a 10-minute video clip on the making of Blue Alert wherein Cohen sweetly sways to Anjani's voice as she records "Thanks For the Dance." He comments as well on her true generosity which never overwhelms but which nourishes and satisfies. At the Anjani link there is also a video of "Thanks For the Dance." At the archival website—Bird On A Wire—you'll find a plethora of interviews and commentary. Dave Hudson provides a compendium at Greencine Daily. And my final recommendation would be Terri Gross's NPR interview with Cohen.

What perhaps intrigues me the most about Leonard Cohen is precisely the body of his work exactly as it has grown over the last few (my last few?) decades. The maturation of Cohen's body of work—through poems, through songs, through photographed persona, through collaborative projects in albums and tribute concerts, through documentaries such as Lian Lunson's upcoming I'm Your Man—reflects the maturation of my own physical body. His poetry's reflectivity is one of its most seductive allures. His depths have a shiny surface. And his depths—like a hematite mirror with which to scry—have reflected my own dark obsessions, my orgasms, my epiphanies; the revelatory smoke to all my confusing flame. He confirms what diarist Anais Nin once wrote, that by going deeply into the personal you achieve the universal.

I first discovered Leonard Cohen in my mid-teens. It was "Suzanne" of course that summoned me to orbit Cohen's gravity and his Grove Press publication of Selected Poems was the first book I ever stole from a bookstore. I can be upfront about that. At 52, with my temples silvered, I can look back at my 16-year-old sticky-fingered hippie self, long dark hair down to my shoulders, and see—without doubt—that the theft of that volume of poetry was a necessary crime to save my soul. From it I learned that my soul was the scent of cloves. Such insights help you survive life. From Cohen's Energy of Slaves I learned that I would happily suffocate in the circle of a lover's back.

When I was a teenager, I wanted to be Leonard Cohen. I wanted to fuse the sensual and the spiritual as experientially as him. He represented for me a world-traveling poet, a sensualist, and (as Joni Mitchell described him) a "holy man on the FM radio." My understandings of desire shaped themselves alongside his descriptions in eager and gainful mimicry. I can't confirm that Joni Mitchell wrote that lyric for Leonard Cohen but somehow that conflation has become personal history in my mind and is now a fact that needs to be disproven before rejected.

You are a holy man on the FM radio.
I stayed up all the night and I watched thee
To see who in the world you might be.

When Jennifer Warnes released Famous Blue Raincoat, Cohen came back into my life in a really big way. Like Girish I concur that the arrangements on that album are resonant and lapidary. Around that time I watched Warnes perform from the album with a five-piece string ensemble at a Bread & Roses benefit at the Greek Theater, Berkeley. The beauty of that performance—the songs themselves, the lyrics, the arrangements, Jennifer's voice, the warm autumnal weather—drove the audience wild with beauty. I recall Bonnie Raitt, who followed Warnes, admitting she was intimidated. "Jennifer," she said, "you blow me away." And the cello's mournful lament became affixed to my understandings of Leonard Cohen and his music. Even though just a cameo, that's perhaps why I was pleased to hear a cello on the Anjani album.

After re-reading what I've just written, I am struck how it confirms Zach Campbell's astute observation: "LC deals with the problems of memory, and the inclusion of the past inside the present, not as a matter of nostalgia but as a condition of daily experience … This is to say, maybe, one doesn't look back in LC's universe so much as he or she is pushed forward by constant, complex, and even irrational presences of the past."

Zach completes his observation: "Even when the signifiers can be ascribed to Cohen's personal life and history, the relation to the listener (and the potential for the reinterpreter) works because it is a whole self-sufficient system of meaning-making. This is what good songwriters and poets often do, constructing something deeply personal but expressing something that exists outside of persona."

Which returns me to the photograph on the back of the Anjani album, where Cohen is captured out-of-focus. This is not only about self-effacement to advance another's career but about Zach's elucidation that persona isn't everything. Or, wryly perhaps, that you get to be a certain age where self-effacement can become merely another aspect of persona.

So what else to say? I won't get to see Lian Lunson's documentary Leonard Cohen: I'm Your Man until a press screening just a few days before it opens so, again, I'm grateful to Zach's initial impressions. At that time, keep your fingers crossed, there's a good chance I'll get to chat with Lian on the film, as well as Martha Wainwright so there will be a later entry then. For now, I would recommend Lian's own blogsite on the documentary. 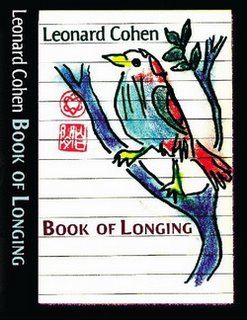 Cohen also has a new book of poetry that's out—Book of Longing—but, try as I may, I couldn't locate it. I had been trying to support my local independent bookseller A Clean Well-Lighted Place For Books but they advised they can no longer stay in business so I guess I should just give up the ghost and purchase online. (So strange to see an independent book seller closing shop and selling off stock. Half the shelves were empty. It felt as if my memory were being erased. And it's always ominous to go to the poetry section of a book store and find no Leonard Cohen.) Whenever I can get my hands on a copy of that volume of poetry—even if I have to resort to my adolescent thieveries—I'll be back to supplement this post.

Because, truth be told, there were so many other things I wanted to write about Leonard Cohen, but, I was covering two dovetailed film festivals and simply ran out of time. For example, I wanted to go back to that early shoplifted volume of poetry to sift through all the highlighted passages (in those days—like Joseph Campbell—my meditation was to underline sentences), just to see if they would bear the same witness today. I've put that on my list of future writing projects.

And I had definitely wanted to play with Altman's McCabe & Mrs. Miller. Which led, of course, to checking out Cohen's affiliation with cinema on IMDb. I guess the truth is I could never exhaust all the possible approaches to Cohen's body of work, but, I remain grateful to Jennifer and Invisible Cinema for encouraging me to begin.

06/27/06 ADDENDUM: I'm delighted to report that I actually found a copy of Book of Longing today and intend to shack up with it the next few days. And believe it or not, I actually bought it!

Also, Dan in the comment section to this entry, provided a link to the most amazing compendium of "Hallelujah" covers I've ever seen on My Old Kentucky Blog!

07/03/06 ADDENDUM: Though not initially intending to, Brian Darr at Hell On Frisco Bay contributes to the Cohen blogathon with commentary on his friend David Eno's animated short Leonard Cohen at Alberta.

So you stole a book of poetry by Leonard Cohen? I think that this was a very prophetic act . . . Your writing on this subject is so interesting because it seems to approach Leonard Cohen's work from the inside out, and it seems to be in your bloodstream now. When I saw the film, I thought that many things about his poetry/life made sense to me. But there are concepts within this documentary that are beyond my understanding right now. It will be a surprise for you, I promise.

I'm intrigued to discover what it might be that eludes your understanding. Can you comment any more on that?

It's interesting what people bring to online discussions . . .

Maya, I guess I perceive Leonard Cohen as a sort of spiritual guide. So the following concepts from the documentary are not what I've experienced as of yet:

-- relinquishing the idea of being the hero in one's one melodrama

-- failing or relinquishing one's personal mandate and then realizing the real mandate . . .

Interesting. Whereas, I could say I actually understand him spot-on. What registers for me in, let's say, the recent Anjani collaboration is a kind of world-weariness. Desire seems to have become suspect with Cohen. He sees it now for the temptation it truly is. For the illusion it really is. Much like he admits that his persona as a ladies man belies the thousand lonely nights he spent in his hotel room.

As a student of Joseph Campbell's, steeped in the monomyth of the hero's individual journey, a myth I clung to as a young man, and which I now have issues with as an older man, I can understand why Cohen would have reservations about the heroic impulse which draws so much attention to itself and which works against an egalitarian construct of community.

His Zen training is clearly influencing his self-conception and his understanding of the other.

Dear Maya: That was beautiful. Go here for more versions of 'Hallelujah' than you ever knew existed:

Dan, thanks for the kind words, and particularly for the pointer to the "Hallelujah" covers. Man! Amazing how many people have covered that song!

Very interesting read. Glad that I stumbled upon your blog.