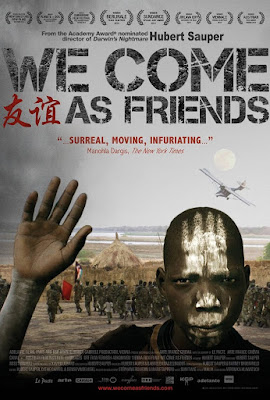 I first watched Hubert Sauper's We Come As Friends (2014) at the 2014 edition of the San Francisco International Film Festival, where Curtis Woloschuk synopsized in his program capsule: "South Sudan may have declared its independence in 2011 but that hasn't kept outside forces from staking their claims in the world's newest country. A Chinese oil company is exploiting the natural resources, sapping 300,000 barrels a day from the ground and contaminating the equally precious drinking water in the process. Meanwhile, American missionaries are exerting their religious influence, offering education in exchange for compliance with their notions of propriety. Having liberated themselves from the devil they knew—Sudan President Omar al-Bashir, charged with genocide in Darfur—these embattled people now find themselves confronted by a new breed of predatory adversary that's eager to reap financial gains while turning a blind eye to the human cost of neocolonialism. An uncompromising documentarian, Hubert Sauper collected a much-deserved Special Jury Prize for 'Cinematic Bravery' at January's Sundance Film Festival. Crossing South Sudan in an aircraft he constructed himself, Sauper captures staggering images of the fledgling nation while simultaneously achieving a remarkable intimacy with its people. While on the ground in this unstable region, he poses the direct, difficult questions that need to be asked and frequently receives harrowing answers. His previous film, Darwin's Nightmare (2004), earned him death threats. The unflinching We Come as Friends should prove no less incendiary."

I welcomed the opportunity to watch Sauper's documentary over a year and a half later as a ramp-up to the 2016 edition of the Academy Awards®, where We Come As Friends has achieved the short list of 15 films considered for Best Documentary. If anything, this is a reminder of how films gestate and mature over a long period of time and a filmmaker has something of a parental responsibility to walk their film through both its festival life and—with any luck at all—it's later theatrical run, through Awards Season. We Come As Friends proves that this can be a commitment that takes years.

Hubert Sauper flew to the Bay Area from Europe and had arrived no less than a hour before appearing at San Francisco's Dolby Lab for a consideration screening, introducing his film, engaging in an on-stage conversation with Michael Fox, and then fielding questions from the audience. I seized the chance to ask the following.

Michael Guillén: As a documentarian, you impose yourself into your film—not as a character, but as a presence—and I understand that imposition to be a form of witness, and your craft as a filmmaker to be that of articulating your witness. My question, however, is technical, and has to do with your editing. You enter and witness many scenarios in We Come As Friends, they build up one on top of the other, one after the other, until they achieve a certain din of hypocrisy, a certain sound level, if you will. And then, suddenly, you interject Malia's jazz vocals to calm the din down. You did this two or three times. It felt like you were putting water on too much heat. Can you speak to that editorial decision?

Hubert Sauper: You just gave the answer. It's a great answer. When you edit a movie, you take a big audience—who you do not yet know—on a journey, right? You say, "Look, guys, you're going to sit here for two hours and I'm going to bring you on this journey." There are moments when there's too high a concentration of bullshit, or of militarism, or of information that brings you into despair that you just can't take anymore. Then you need a moment of reflection, a moment of calm, or a moment of something completely different that is also abstract. When you see someone's land being taken away from them, 6,000 acres gone, it's so precise, so complete, and revolting that it brings you into a state of despair—if you're a feeling person—and if you don't get a moment of looking over a river or just breathing or flying without noise, then you cannot take the next scene.

Guillén: But the choice of jazz, instead of—let's say—a classical adagio?

Sauper: It's not an intellectual decision. I tried a couple of things. I tried Phillip Glass. I tried classical music. None of that worked. And I didn't choose jazz because jazz is associated with Black culture in America—absolutely not—though some people may read it that way. I can't blame them. It's an instinctive thing. I tried different things, but when I used Malia, it worked. There's no explanation for why or what—I can't even explain why—and, of course, for some people it doesn't work. For some people the whole film doesn't work. And that's just fine.

Guillén: It did work.