The Film on Film Foundation (FOFF)—partisans of movies screened on film and not digitally—is showing Otto Preminger's 1963 The Cardinal in the same month, and at the same venue, as Pacific Film Archive's Preminger mini-retrospective. Which Preminger idea came first? I haven't asked Steve Seid, PFA's video curator, or the FOFF principals yet—on the other hand, maybe I did and got no clear answer. (Many of the same films were shown at a January 2008 New York Film Forum series, and Cinémathèque Ontario in summer of this year.) 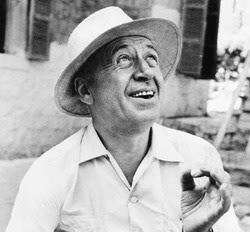 Whosever idea it was has put me in Preminger perplex mode for the past month. It's given me a chance to recontextualize the Preminger films I already love (Laura, Angel Face, Daisy Kenyon, Carmen Jones) and explore the ones I've never seen or especially liked. Thanks to Turner Classic Movies I was also able recently to catch large chunks of Anatomy of a Murder, Bunny Lake is Missing and Exodus in what I believe was a tribute to title designer Saul Bass. Several screeners from PFA and offers from that remarkable cineaste (and FOFF member) Larry Chadbourne to show me the near-entirety of Preminger's work had to be declined in the interests of time. Finally, Chris Fujiwara's excellent 2008 critical biography The World and Its Double: The Life and Work of Otto Preminger (Faber & Faber, 2008) sustained me during two 10-hour plane flights. I look forward to reading Foster Hirsch's book Otto Preminger: The Man Who Would Be King (Knopf/Random House, 2007).

I also haven't asked FOFF why of all the films they chose The Cardinal, the first '60s widescreen Technicolor "superproduction" on their schedule. It's one of Preminger's long (nearly three hours), large-scale explorations of institutional compromise and decision-making, up there with the broad canvases and huge casts of Anatomy of a Murder, Advise & Consent and Exodus. Of these four, however, it's the least commercially and critically successful—despite uncredited contributions to the script by the likes of Gore Vidal and Ring Lardner, Jr.

Anyway, that's for interested parties to decide for themselves after they see The Cardinal this Sunday at PFA, among the other Preminger films playing before and after it. Weekends in December will be Preminger paradise. 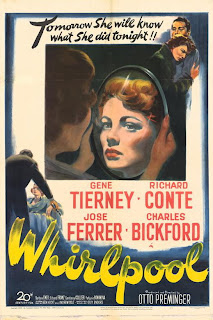 Although I have enormous respect for his epics, I'm partial to Preminger's smaller-scale films, including the noirish works—and, by the way, Preminger disliked the term film noir being used to characterize them. I watched Whirlpool (1949) over a couple of days, a second time with Richard Shickel's casual commentary. One scene put me into a paralyzed stupor watching Gene Tierney as Ann, herself hypnotized, entering an unfamiliar house to hide evidence, seeing a portrait of the home's owner, and then coming upon a shocking sight without any discernible affect. Her zombie-like attitude in this particular scene is disturbing, yet we can still feel her mind working beneath the surface of Tierney's lovely complexion: Why am I here? What am I looking at? What am I doing? How am I supposed to react? I think it's that searching, wondering attitude that spellbinds me. Some of Preminger's most effective moments are of characters who, not hypnotized, sit alone and wonder.

In his book on Preminger, Fujiwara interprets the way the camera observes her: "The space around her, in the frame, figures the mental space of her own unconscious self-observation. The smoothness of the camera movements suggests this unconsciousness by emphasizing the mechanical quality of her actions, the regular, dance-like transitionality of all her movements." 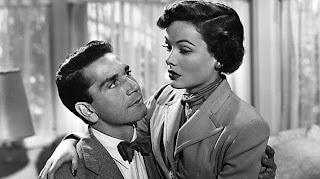 Then Ann's tremulous, round-eyed reactions to the men around her, who whether benevolent or malevolent are still trying to control her, are the index of a woman caught in a hopeless situation: she's damned if she's innocent and damned if she's guilty. She can't be a "serene and devoted wife" nor a brazen adulteress seeking treatment from a sadistic swindler, and there are no choices in between. All she wants is a good night's sleep! It's hard to tell who gives her a harder time: her distrustful psychiatrist husband (Richard Conte, perhaps not as miscast as others claim, since his tough-guy impatience bursts out of his rational/scientific veneer as you might expect of a husband who thought he had his beautiful wife and illustrious career under control); the detective who's recently lost his own wife and won't let suspect Ann out of his sight (Charles Bickford, very subdued here); or the smug and cynical quack/hypnotist David Korvo (a snakelike José Ferrer, even as he lies in bed sweating from the aftereffects of a gallbladder operation). 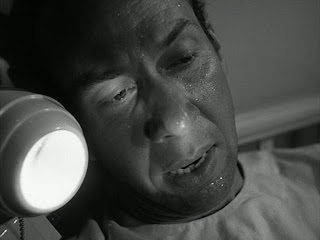 Korvo knows all about women and expresses his cynicism freely. He rolls his eyes at Ann's attempts to keep their relationship aboveboard by not going to his hotel room: "Very well, I bow to your abysmal scruples." He's contemptuous of women and uses them to get what he wants, whether it's an inheritance or destroying the career of a more legitimate expert like Conte. His target before Ann, a woman who's trying to get her money back from Korvo, already looks destroyed before her ultimate fate—maybe it's the Bride of Frankenstein skein of white hair or the preternaturally pale makeup, but Barbara O'Neil looks almost as blood-drained as the greenish corpse of Scarlett O'Hara's mother. 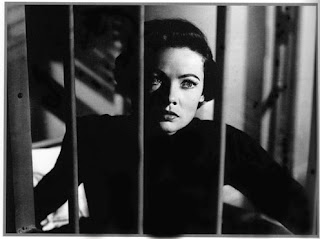 It's hard to tell how much Preminger intended me to feel so vividly Ann's predicament of a comfortable wife in postwar America, in a film that instead, like Laura, seems to emphasize the enigmatic quality of another woman played by Gene Tierney. Or one that uses a B-movie gimmick like hypnosis-induced crime. "You made me play-act," she accuses her husband, who trusts her only as long as she plays the perfect wife. She's like the mermaid pin she shoplifts from the department store, the witness to which secret proclivity is Korvo, the man who hatefully "knows" all women. Men seek her, hook her and land her, but she's flopping around on land wishing she were at sea—or at least unable to explain her feelings of deep discontent.

Part of my perplexity with Preminger's films comes from wondering if I'm reading too much psychological depth into straight-faced entertainments, like I sometimes think Fujiwara does despite his often brilliant analyses. But I think his favorable opinion of The Cardinal, and especially Tom Tryon's often-criticized performance, is right on. Preminger, in his bullying and manipulation of his actors, usually got what he wanted out of them. Notoriously he terrorized Tryon, even firing him on the first day of shooting in front of his visiting parents and rehiring him an hour later. Tryon's performance has usually been condemned for its woodenness, but I love it for the same reason and think it's true to the character.

Stephen Fermoyle, son of a Boston motorman, has ambitions to be cardinal and must fulfill several tests on his way up the ladder. He impresses the monsignor with his ability to comfort immigrant parishioners in their native Italian during a "miracle," and he secures a relationship with the influential and pragmatic Cardinal Glennon (John Huston in a marvelous performance). He is tested for humility by being sent to the Siberia of parishes. But his severest test comes from his sister Mona (Carol Lynley), whose Jewish boyfriend (John Saxon) has refused to convert to Catholicism to marry her and who in her own attempt to "convert" him has gotten herself pregnant, alone and in labor in a sleazy brothel. Stephen refuses to agree to a late-term abortion to save her life, and she dies while the child survives. This test makes him lose his religion, and he becomes an English teacher in Vienna. Resisting the love of a beautiful Viennese student (a radiant Romy Schneider), he realizes that he has passed another test and returns to the priesthood.

From here he continues Fujiwara's characterization of him as a "superpriest who travels around the world," now going to Georgia to defend a poor black parish against the Ku Klux Klan and getting kidnapped and whipped for his trouble. Preminger apparently added the nonfictional character of Austrian Cardinal Theodor Innitzer (played phonetically by Josef Meinrad), whose belief in Adolf Hitler's promises to the Catholics is his undoing. Those still looking for scenes parodied in Inglourious Basterds will find a strudel scene as well as a Hitler snitfit (here offscreen).

Why is Tom Tryon effective? Because the actor's attitude of pained self-consciousness, his woodenness, is an accurate manifestation of the compromises the character has had to make along the way to attain cardinal. Fujiwara quotes Preminger in an interview saying that the character (whom he calls "Tom Tryon") is weak, that "he never does what I would think is right." In two powerful scenes, the confessional and the prison, Stephen fails the two women he loves. His ascension to cardinal marks his ultimate compromise with the world of power.

More reasons to watch The Cardinal:

Murray Hamilton, whom I didn't fully appreciate having seen him in relatively one-dimensional roles in The Graduate and Jaws. In The Cardinal he plays a conscience-stricken white supremacist and in Anatomy of a Murder a bartender trial witness.

Burgess Meredith in performances of abjection before he played cartoons like Batman's nemesis the Penguin or Rocky Balboa's trainer. In The Cardinal, he plays an unambitious parish priest dying of shame and multiple sclerosis. In a brief but unforgettably awkward scene in Advise & Consent, he appears before the Senate confirmation committee as a damaging witness to a period in cabinet hopeful Henry Fonda's past.

12/06/09 UPDATE: Of related interest, Brian Darr confesses his admiration for The Cardinal at Hell on Fricso Bay.

And then Tryon walked away from Hollywood to become a novelist.

I finally saw The Cardinal a few years ago, and what is striking is still the conflict between how religious faith and policies still conflict with the personal and the public. In some ways, the film is more meaningful now when the Catholic Church feels it is their right to impose their beliefs within the the public sphere, as in the health care debate.

I got to very briefly meet Preminger after a student screening of Such Good Friends, a film a very much liked at the time, that seems to have disappeared.

I'm really looking forward to this. I vaguely remember watching THE CARDINAL from the back seat of my parents' car at the drive-in when I was like, 10-years-old.

Great article, Frako, as always. I'm glad I'm not the only one who was reminded of Christoph Waltz while watching Meinrad's performance.

Was sincerely thinking of heading to Berkeley this evening for a rewatch, but it was not to be. Thanks to V.F. Perkins, I'm very interested in Preminger's camera movements and how they signify perspective and focus. The ones that really stuck out for me were the ones that turned attention away from Tryon and toward Ossie Davis; in a way the Georgia sequences feel the most dated in the film, but they're a necessary precursor to the finale in Vienna; without them Fermoyle would remain too untested.

Michael, thanks for the tip of the hat. And the sinfully awful joke.

I think this movie should be called "The Turmoils of Fermoyle." Nooo?

GROAN! No atoning for that one.