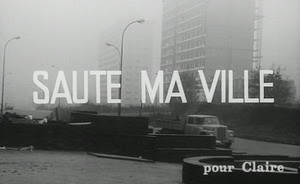 Caught the first program of early Akerman films at the San Francisco Museum of Modern Art and was quite pleased to hear their announcement that Akerman will be present to introduce SFMOMA's upcoming screening of Jeanne Dielman.

Saute Ma Ville (Blow up My Town, 1968)
When I was a young man working in the law firms, I had to negotiate the stress induced by my overflowing in-box. I was reminded of the task of the miller's daughter in the fairy tale "Rumpelstiltskin". Do you recall? The miller has bragged that his daughter can spin flax into gold and the king imprisons her in a lonely cell with a huge pile of flax expecting her to do just that. I often felt that I, too, had to turn my in-box full of assignments into gold. I took refuge in something Joseph Campbell was fond of saying: that it is in the performance of our everyday tasks that our radiance shines through.

Of course, all these years later I have to admit that radiance goes only so far. Responsibility goes only so far. Every cultural ideal is complicated by inherent personal limitations and issues of adherence. I can now read the story of "Rumplestiltskin" as a cautionary tale of what happens when the patriarchy (fathers, kings, lawyers, judges) tells a young woman (or a young man for that matter) what she (or he) can, must or should do. In the face of such patriarchal presumption, obedience might be the first option, but inevitably anarchic resistance becomes the abiding temptation.

Allegedly inspired by Akerman's chance encounter at 15 with Jean-Luc Godard's Pierrot le fou—and, indeed, somewhat of an homage to Godard—Saute Ma Ville is an amusing, exuberant and alluringly anarchic sing-song, subsidized—Wikipedia reports—"from shares she sold on the Antwerp diamond exchange, procuring its remaining budget through clerical work." In 1971 the film premiered at the Oberhausen short-film festival. At L.A. Weekly, Scott Foundas suggests Akerman's performance is as much an homage to Anna Karina as Godard. He states that Saute Ma Ville "radiates such convulsive energy that it seems the product of someone who ran immediately from the cinema showing Pierrot, picked up a camera and began to shoot." As synopsized by the Pacific Film Archive: "Chantal Akerman's first film prefigures the most progressive aspects of her later work. Akerman herself plays a young woman who finds a new solution to the problem of housework. The whimsical nature of the story is rendered serious by the quality of the claustrophobic framing and the oblique camera angles."

If—as Jonathan Rosenbaum has suggested—Akerman's "masterpiece" Jeanne Dielman is, in effect, a remake of Saute Ma Ville—specifically in its negotiation with the invisible labor of housework—Saute Ma Ville is a young woman's defiant protest against culture's charge that women create domestic order. This is an age-old proscription of sorts, condemning the second sex to unending servitude. I am reminded of my years working among the Maya in Central America and how their central myth involved raising the World Tree within the three hearthstones of creation. This is, of course, a story about the differentiation of consciousness from unconsciousness, a shift from darkness to light, but it is wholly predicated upon those three hearthstones of creation; the matrix of order. The guidance of myths is such that within the average Mayan household it is the mother's responsibility to wake first each morning to light the fire within the three hearthstones found at the center of every Mayan household. I can only imagine that every now and then, perhaps more often than not, a mother simply wants to sleep in? To Hell with order!

In Saute Ma Ville, a young woman (played by Akerman) messes up her kitchen in disruptive abandon. With frenetic enthusiasm she polishes her boots and ends up polishing her shins as well. Already playing with compressions and elongations of time to simulate the experience of real time, Akerman wolfs down a plate of spaghetti so quickly that I thought she was going to choke. Already exploring the disjunctive rewards of asynchronic sound, the film's actions are accompanied by an almost-maddening sing-song. This aspect of the film made me chuckle despite myself remembering the few instances when my digital recorder has accidentally turned on in my pocket while I'm in transit, recording my self-mumblings, likewise in sing-song. (And then I wonder why strangers look at me as if I'm crazy!) At one point, sitting on the floor, Akerman glances over at her reflection in a mirror. If—as a good friend of mine has written—the silent mirror forfeits, then you have to admire Akerman for acting out to counter the silent reflection.

La Chambre (The Room, 1972)
Speaking of mirrors, the camera lens (i.e., the spectator) serves as such in Akerman's vertiginous La Chambre. As PFA synopsizes: "In La Chambre (shot by Babette Mangolte), the camera takes in a room in 360-degree pans; a woman (Akerman) lies eating an apple. Offscreen voices reflect, in a kind of verbal counterpoint, the 'mirror' into which the young woman informs us she is looking. A film of enclosure and repetition." It's also a film that suggests exteriors through its obsessive preoccupation with interiors. Malcolm Turvey writes in his Art Forum essay: "Akerman's repeated pan of her apartment in La Chambre 1 refuses to privilege the filmmaker lying in bed as it takes in the surrounding space and its contents." And yet it seems that the camera is trying to privilege Akerman, searching back and forth across her image, struggling to settle there. In his intriguingly ambulatory essay—"Chantal Akerman: Walking Woman" (replicated by Harry Tuttle at Unspoken Cinema)—Adrian Martin writes: "Akerman provides a mirror for our own activity as spectators, as we negotiate the illusions and lures of narrative." There's certainly that sense in La Chambre.

Hôtel Monterey (1972)
As PFA further details: "In 1971 Akerman came to New York where she was particularly influenced by the work of Michael Snow. That influence is evident in La Chambre and decisive in Hôtel Monterey, which consists of several single shot segments: city views through windows, a long tracking shot down a corridor, a stationary shot of an elevator, and the inhabitants of the Hotel Monterey as they come and go." PFA quotes Christina Creveling (Camera Obscura)—"Shot by Babette Mangolte; warm, warm colors in such restricted spaces"—and Gary Indiana (Art Forum)—"In Hôtel Monterey the camera remains fixed at Chantal Akerman's eye level—she is about 5 feet, 1 inch tall-giving a low angle. Except for a few crepuscular tracking shots, there are no camera movements. Shots are sustained so far beyond normal duration that the eye, even when confronting static space, experiences a lavish range of optical events. The film's survey of a seedy welfare hotel is more architectural than anthropological; human beings stray in and out of the frozen frame, sometimes registering mild surprise at the presence of the camera, and eventually disappear from the film altogether.... What Akerman's camera records, without distraction or augmentation, is the experience of space over time, how the eye receives information, breaks it down into constituent parts, and recomposes it."

In his above-referenced essay, Adrian Martin quotes Akerman from a Camera Obscura interview, wherein she described her experience as a runaway young Belgian landing in the Soho of the '70s—at the time when she became influenced by Michael Snow—as a core moment of personal indefinition among "people as blurred (indéfinis)" as herself. Martin suggests that Akerman "internalizes and projects in her art, as if it were her destiny, a vision of the 20th century world citizen: displaced, nomadic, rootless." Quoting from Bordering on Fiction: Chantal Akerman's D'Est by Kathy Halbreich and Bruce Jenkins, Martin adds: "From an amalgam of Warhol, Snow, Godard, the painter Edward Hopper and other influences, she developed a style based on 'the relationship between film and your body, time as the most important thing in film, time and energy'." As previously cited, Rosenbaum believes Hôtel Monterey "reveals perhaps more than any other Akerman film how central an influence Edward Hopper has had on her work."

Certainly, the sense of disconnection and alienation of urbanites from each other masterfully prevalent in Hopper's work is likewise evident in Hôtel Monterey where—as Malcolm Turvey states it—"all we learn about the hotel guests is what we can infer from their brief appearances as they pass through the lobby, corridors, and elevator. When we do see them inside their rooms, they are either turned away from the camera or facing it impassively." In some instances the residents seem to resent the intrusion of Akerman's camera into a space that—though common—is begrudingly shared.

As if confirming the quality of "walking" upon which Martin ruminates, The Guardian's Adrian Searle describes Akerman's camera as "a silent walker, a leading character in a movie without a plot." Searle notes Hôtel Monterey's silence—"the only sound I hear is the scratching of my pen and the hum of the projector"—and, in my viewing, I too was struck how the sounds of the audience served as a score for the film: the burgeoning impatience as spectators began fidgeting in their seats, one man snoring unabashedly, seats flipping back as exasperated patrons left the theatre, my own breathing. Hôtel Monterey," Searle concludes "is full of suspense, but entirely without resolution" and is "an atmosphere as much as a movie." Searle likewise notes Akerman's painterly compositions—which Rosenbaum frequently references—not only Hopper but in one still image of a seated pregnant woman seen through a doorway, Vermeer.

As Martin also writes: "In Akerman, the tenacious sense of duration, of 'time taking place' [overtaking space?], is married to a penchant (rigorously adhered to for virtually her entire career) for pictorial frontality—not only in static frames but in her famous signature lateral tracking shots." Though Snow is credited as the guiding influence of Akerman's exploration of structural and architectonic filmmaking, I was startled to sense Stanley Kubrick. A sudden shot of a neatly-made bed reminded me of a similar sequence in Kubrick's 2001: A Space Odyssey (1968) filmed a few years earlier and the shots of long, empty corridors suggested the same haunting menace as in Kubrick's The Shining (1980), filmed eight years after Hôtel Monterey. Whether such structuralist aesthetics reflect cultural attitudes of the decade or distinct influences of one filmmaker upon the other (has anyone explored structural affiliations between Snow and Kubrick, for example?), the template suggests the visual fecundity of the rectilinear composition. When Akerman's camera begins to move forward down the empty hallway, it approximates the S.S. Discovery's movement into the black monolith and—just as astronaut Dave Bowman is astonished to witness that the rectangular monolith is "full of stars"—so are whole universes present in the empty spaces and rectilineal compositions Akerman stresses in Hôtel Monterey. Even if this "lavish range of optical events" is projected or imagined by the audience.
Posted by Michael Guillen at 1/04/2009 09:49:00 AM

Wish I hadn't missed this set, because I really loved Je, tu, il, elle. I may be able to catch them this Saturday though.

Hope to see you at more of these screenings!