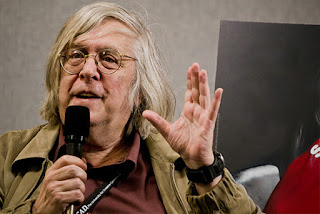 I find it gratifying when a film critic as accomplished as Jonathan Rosenbaum champions the work of a filmmaker as accomplished as Chantal Akerman. Such a symbiosis of visions and styles adds critical breadth and heft to the cinematic endeavor. I'm charmed that a critic can entertain an ongoing relationship with a filmmaker over an extended period of time, such that his own body of work becomes an intensely personal reflection of the artist he mirrors.

Rosenbaum's overview of Akerman—"Romance of the Ordinary"—not only offers insight into her films but provides one of the best working definitions of mise en scène I've ever read. Rosenbaum details the term's introduction into American film culture, lobbies against the pretension of hyphens, and emphasizes its service to a lesser-known term: decoupage. "In this context," he cautions, "it is misleading to talk merely about Akerman's mise en scene in spite of her close attention to framing, because from that vantage point, many of her movies look rather anemic. It's her decoupage that matters—that is, not only what happens in her shots but what happens between them, among them, across them, and through them."

In general assessment Rosenbaum writes: "Virtually all of her films, regardless of genre, come across as melancholy, narcissistic meditations charged with feelings of loneliness and anxiety; and nearly all of them have the same hard-edged painterly presence and monumentality, the same precise sense of framing, locations, and empty space. Most of them are fundamentally concerned with the discomfort of bodies in rooms."

As if indirectly commenting on the shift from the theatrical screen to the gallery space—the current emphasis in Akerman's career—Rosenbaum quips: "[A] good many of her movies qualify as remakes of her earlier works." 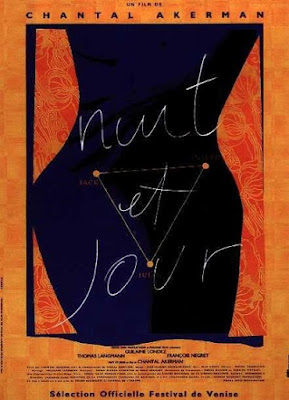 Rosenbaum observes that the recurring theme of exile in Akerman's work underscores not only her Belgian-Jewish roots (which positions her as "an outsider in an international context") but a nearly neurotic compulsion towards normalcy. "[T]he desire to be 'normal'," he suggests, "is largely reflected in the efforts of the heroine simply to inhabit a domestic space"; a "yearning for the ordinary as well as the everyday" that runs through Akerman's work "like a recurring, plaintive refrain." In his wholly fascinating write-up of Akerman's Night and Day (1991), Rosenbaum expounds on a characteristically Belgian trait—their "decorous sense of the everyday"—and references what the English writer and broadcaster George Melly once said about Belgian painter Magritte: "He is a secret agent, his object is to bring into disrepute the whole apparatus of bourgeois reality. Like all saboteurs, he avoids detection by dressing and behaving like everybody else."

Rosenbaum compares and contrasts Night and Day to Akerman's earlier work, "[c]onsidering all the oppositions that inform the work of Chantal Akerman—such as painting versus narrative, France versus Belgium, being Jewish versus being French and Belgian, and the commercial versus the experimental." I especially appreciate his take on what Malcolm Turvey terms "Akerman's unique spatiotemporal sensibility." "In broad terms," Rosenbaum posits, "the polarity between painting and narrative is one between persistence and development. A painting exists in space, a narrative in time; persisting is what a painting does in time, and developing is what a narrative does in space. Consequently, insofar as Akerman's films resemble paintings, character and plot development is always something of a problem, and insofar as they impose narratives, the persistence of people and places without any development is also something of a problem."

Rosenbaum amplifies his overview of Akerman's career with individual reviews of her films:

Hotel Monterey (1972)—"[R]eveals perhaps more than any other Akerman film how central an influence Edward Hopper has had on her work." 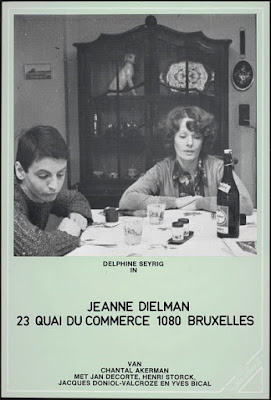 Jeanne Dielman (1975)—"[O]ne of those lucid puzzlers that may drive you up the wall but will keep you thinking for days or weeks." Some of Rosenbaum's earliest thoughts on this film were included in his essay "Edinburgh Encounters", originally published in the Winter 1975/76 issue of Sight and Sound, reprinted on pages 40-44 of his 1995 collection Placing Movies, and now available on his revamped website.

News From Home (1976)—"[O]ne of the best depictions of the alienation of exile that I know."

Window Shopping (1986)—"[O]ne of the most ambitious efforts of a strikingly original independent."

American Stories (1989)—"[S]teeped in the brooding melancholia and the nocturnal, insomniac ambiance of Toute une nuit, one of her best films … its distinctive bittersweet taste lingers."

Night and Day (1991)—Both capsule ("Akerman brings a lyricism to the material that makes it sing like a musical") and incisive essay ("Insomnia has long been a basic element of Akerman's nocturnal poetics…. But until now Akerman's take on it has seemed troubled and neurotic. Her magically luminous nighttime exteriors and claustrophobic interiors, like those of her painterly influences, Belgian surrealists Paul Delvaux and Rene Magritte as well as Edward Hopper, glower with abnormal degrees of presence. In Night and Day, by contrast, insomnia seems a kind of precondition for utopian romance.")

Chantal Akerman by Chantal Akerman (1996)—Both capsule ("Consists mainly of clips from her previous films, but the selection and arrangement of these are canny and subtle, and Akerman's on-camera introduction is touching and revealing") and a more in-depth review ("Exalting the Everyday").

South (1999)—"Virtually all the works of Belgian filmmaker Chantal Akerman are worth seeing, and her 78-minute video documentary about Jasper, Texas, is no exception."

The Captive (2000)—"[N]ot only her first truly literary film, but perhaps the one that works best in narrative terms."

From The Other Side (2002)—Both capsule ("A major work that creeps up on you gradually") and a more in-depth essay ("The Great Divide").

10/06/15 UPDATE: Since first endeavoring this entry back in 2009, Rosenbaum has extensively rehauled his website, including even more entries than those listed here. Of particular importance is his essay "Chantal Akerman: The Integrity of Exile and the Everyday."

Great stuff, Maya! You may enjoy the fact that I have designed my forthcoming website of 30 years of pieces partly along this line: even (or especially) when I have not written one 'sum-up' piece on a filmmaker or genre, in a way it's more intriguing to follow one critic (in this case, me!) in his/her meandering, evolving, sometimes startkly changing relations to a certain cinema-object. It gives an example of a certain 'living' relation to movies, over time.

Keep up the terrific work!

Hey Adrian, thanks for stopping by to comment. Last year's red herring--"Is film criticism dead?"--evaporates when one considers instead, as you state it, "a certain living relation to movies, over time."

Please advise when your website goes active. Girish has nearly singlehandedly inspired a concentrated focus on your work. I admire so much that you have been at this for--my God!--30 years! I've only been at it for 3 and already I feel like an elder statesman. Heh.

Much thanks for your encouragement.

Terrific post - I wish more critics had, like Rosenbaum and Roger Ebert, a significant portion of their work available online. Thanks for finding all of these pieces.

One omission I noticed, that didn't seem to make the transition from the Chicago Reader to JR's personal site, is his capsule review of Akerman's 1993 D'Est, or From The East, available here:

I haven't seen the film, but it was on JR's top ten of the nineties list, so I wouldn't be surprised if he wrote a longer piece on it also.