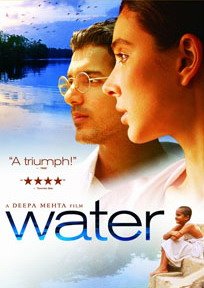 Earlier this year I watched Deepa Mehta's Water on the Castro Theatre's large screen as the Centerpiece Presentation of the 24th San Francisco International Asian-American Film Festival. Limited to a hold review capsule, I wrote at the time: Witnessing an anquished widow lose her spectacles inspired Deepa Mehta to complete her elemental trilogy (Fire, Earth) with the visionary, revolutionary and emancipatory Water, which resuscitates this resilient wisdom: water that flows will clean itself. Gandhi's sage discernment that the worship of God as Truth leads to social ills whereas the worship of Truth as God does not is flexed into powerful beauty here. A festival gem not to be missed!!

Water went on to win the Audience Award for Best Narrative Feature at 2006 SFIAAFF. Deepa Mehta honored me with an interview the day following the Centerpiece Presentation, which I likewise posted on The Evening Class. Since then there have been several excellent interviews with Mehta, including Geoffrey Macnab's Independent piece; Jeannette Catsoulis' article for Reverse Shot; and Richard Phillips' conversation for the World Socialist Web Site; to mention some of my favorites. Ryan Stewart seems to be the lucky one to interview Lisa Ray for Cinematical.

Now after its respectable run at moviehouses where it garnered nearly unanimous critical acclaim (Time called it "a triumph"), Water has been chosen as Canada's foreign film entry for the Academy Awards. Those who missed out on the opportunity of seeing Water at their local moviehouses can redeem their folly by catching it on a new 20th Century Fox dvd, which features an audio commentary by the director, a featurette on The Story Behind the Making of Water, as well as a behind-the-scenes featurette.

The dvd critics have been equally as lavish in their praise. Kurtis Beard from DVD Beaver finds the director's commentary "excellent" and states: "Deepa Mehta speaks fluently and succinctly about the topic of her film and a number of other aspects about production. The information Mehta offers about religion is especially insightful and I walked away with a great deal of knowledge that I may have never found elsewhere. This is a fine commentary and Mehta is a pleasure to listen to."

Phil Bacharach at DVD Talk describes the transfer as "exquisite" and likewise commends Mehta's audio commentary as "thorough, informative and consistently engaging. She covers a great deal of ground, and manages to do so in a fluid pace that does not feel overly scripted." He states the behind-the-scenes featurette "boasts" interviews with Mehta and the cast.

Daniel MacDonald from DVD Verdict joins the chorus: "The 20-minute behind-the-scenes featurette provides some insight into Mehta's directorial style, and the struggle of bringing this story to the screen, intercut with scenes from the movie. There is a second, five-minute segment focusing strictly on the controversy Mehta faced during her first attempt to shoot the picture in India, and how she dealt with it. Mehta's audio commentary . . . gives a constant stream of unfailingly interesting and pertinent tidbits about the movie's themes, the production design, the actors, etc. . . . Overall, her comments give the viewer a deeper understanding of the piece, all you can ask from an audio commentary."

I have now seen Water five times and am delighted to discover that it is one of those films of rare and captivating beauty that never ceases to amaze, a film of heart that offers layer upon layer of insight into the human condition, and bears repeated viewing as effortlessly as swallowing a cool draught of water during fevered times.

i just watched water tonight (and did my own right up on it...in my own way)...

but i wonder if Water has a chance this year of getting nominated for best foreign language film?

i really love to see again john and mira nair making another movie.in this movie lisa ray is really awesome

i am in love with lisa ray

This is a wonderful, moving film. Just the treatment of how powerful a message Gandhi's was makes it special.
I too am in love with Lisa Ray. She is spectacularly gorgeous.