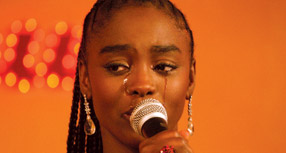 Along with the mindblowing selection of films at TIFF, the opportunities to socialize and network are equally thrilling. Stopped into the luxurious Sutton Place to meet Courtney Noble, publicist for Dennis Davidson Associates handling Fortissimo's films. "Joe" offered me a comp ticket to Syndromes and a Century. How could I refuse? So I picked the ticket up from Courtney. Also met Janet Kim, Miramax publicist for Renaissance, to arrange an interview with director Christian Volckman. Outside her window at the Intercontinental enthusiastic students recently returned to college life were parading down Bloor Street shouting at the top of their lungs and encouraging motorists to honk their horns in solidarity. Quite the commotion. How could they be so riled up in all that humidity? I was deeply appreciative of Miramax's concession to let me interview Volckman even without TIFF accreditation and regretted missing out on interviewing Peter O'Toole who decided not to attend TIFF.

Caught a screening of Abderrahmane Sissako's Bamako at the Paramount, which is without question one of the finest moviehouses I have ever experienced. Seeing this African/French coproduction on such an immense screen underscored the unique opportunity TIFF attendees have to not only see foreign films but to see them at their very best projection.

Bamako reminded me of why I chose The Evening Class as the name for my film blog. It is right in league with Sembene's assertion that African cinemas are the evening class for adults who approach cinema as a means to focus on the issues of their lives. In the West we are accustomed to such issues being diluted by fictional dramatizations that cater to our short attention spans and whatever appetite for narrative entertainment or visual spectacle is currently in vogue. Bamako will disappoint such expectations and will not likely find favor among most Western audiences, which is unfortunate, because it is short of brilliant, particularly in its indigenous allegiance to now-outmoded styles of oratory that any armchair anthropologist will recognize from the Algonquin, the Maya, among other groups who encircle an issue with eloquence in hopes of sifting out a solution.

In Bamako the World Bank, the International Monetary Fund, globalization itself, is put on trial in a small courtyard where the rituals of justice comingle with the rituals of everyday life. But justice, ever a relative term too frequently mistaken for law enforcement, is not only blind with dispassionate eyes wide open but as hobbled as the metaphorical ram that provides moments of comic relief for being a thinly-veiled critique of the judicial process. I am reminded of the historical accounts of Amerindian oration subverted by the treaty-speak of the invading Europeans, how all that eloquence pleading for fair treatment was reduced to signed treaties that were easily ignored and broken, and self-serving laws that ignored existing systems of resolution. What is spoken of in Bamako is readily apparent and that might draw criticism from those wanting to hear something "new." But how can eloquence move on to something "new" when it is still encircling the unresolved issues of the past? What needs to be paid attention to here is how these complaints are urgently addressed and the countenances of those addressing the court or listening nearby. The faces tell everything. They are powerful and beautiful and diverse. Some complain to the court in anger, others in heated debate, others through silence and a refusal to acknowledge the court's sovereignty; but, the movie's sterling moment is when an elder who has been refused audience early in the film, can no longer hold the words in his heart, and interrupts the proceedings with a song that does not need to be subtitled to be translated. It is one of the most powerful songs of heart I have ever heard and its plea for compassion silences everyone into rapt attention. My breath caught in my throat. Bamako asserts that it is not enough to find blame, it is not enough to find those on trial guilty. Suffering demands immediate recompense and the shame of modern life is its calculated deliberations.

Abderrahmane Sissako was in attendance and I wish I could have stayed to hear the Q&A but had an appointment to keep. In gist, however, he was grateful for the film being shown at the festival and hopes audiences will intuit that Africa's lament might all too soon be inherited by the West.

Continuing with the welcome and palpable sociality of the festival, I joined several members of my on-line film "fraternity" at The Ethiopian House for dinner. It was simply wonderful to meet the likes of Darren Hughes of Long Pauses, Doug Cummings from Film Journey, Girish Shambu from Girish, Rob Davis from Paste Magazine, fellow Twitchmate Jason (aka Opus) and several others as we discussed/argued film and tore spongey bread to sop up spicy chicken. I could have spent hours getting to know each and every one of them better but festival itineraries are demanding and I rushed off to save space in line for those of us attending the Midnight Madness screening of Bong Joon-Ho's Gwoemul/The Host.

The audience that SF Indiefest programmer Bruce Fletcher is cultivating in San Francisco is way-developed in Toronto where the huge Ryerson theater, seating over 1200, was enthusiastically packed by a voiciferous audience screaming for spectacle. The Host did not disappoint. It delivers state-of-the-art special effects, quirky humor, and satirical commentary on industry and government. From its thrillingly early reveal of the monster we have all come to see dangling from a bridge, the monster then dives into the water and approaches the riverside where it wreaks havoc and destruction among families picnicing on the river's shores. The Host then enthusiastically explores the childhood fantasies of director Joon-Ho who grew up among the banks of the Han river, fascinated with the Scottish legends of the Loch Ness monster, and imaginatively transposing them to his home terrain. To his credit, Joon-Ho stayed up with the rest of us to answer questions after the screening. By the time I caught the "Vomit Comet" to Mack's home it was nearly 4:00 in the morning. Midnight Madness at TIFF is not for the faint of heart. But The Host was worth being rained on while waiting in line and every exhausted step home!

09/11/06 UPDATE: Although it was exciting to have Joon-ho on stage to field questions from his enthusiastic Ryerson audience, the interaction was somewhat marred by a translator whose halting translations proved more difficult to understand than Joon-ho's Korean. For example, I could clearly understand that he was talking about the Loch Ness Monster--he named it as such--but she interpreted it as the "Nessie Monster." The Nessie Monster?! Huh? After the clear and articulate translations of Kore-eda's comments at the screening of Hana, the translations of Joon-ho's comments reminded me that it's a real catch-as-catch-can when it comes to these public Q&A sessions with foreign directors. I really wish they would have found someone more fluent in English to maximize the discussion because I don't really feel we were given the best of what Bong Joon-ho had to say.

Notwithstanding, Joon-ho was asked how San Francisco's Orphanage (who did the effects for Hellboy) became involved in the project and why they were chosen to achieve the creature design for The Host? The Orphanage was only one of three visual effects companies involved in the project (I couldn't understand the translator with regard to the other two) Three countries were involved in the modeling and computer graphics--America, Australia, New Zealand and, though by Hollywood standards, the budget was small; by Korean standards it was huge. The budget determined the choice of studios, with SF's Orphanage taking about half of the budget for their effects.

As to how he came up with the idea for the film and whether its origin was with his highschool days, Joon-Ho concurred. He grew up near the Han River and developed many fantasies there. He was fascinated by stories of Scotland's Loch Ness monster and frequently wondered what would happen if the monster lived in the Han River? He became intrigued by the prospect of combining the intimate, familiar space of the Han River with sci-fi.

Asked about the political subtext of the film, Joon-Ho related that an insistent questioner at Cannes kept pressing him to admit that the monster in The Host represented the United States. Though he couldn't deny this interpretation, it was not really the intention of his film, though it could be included into the various satirical visions incorporated into the film to describe Korean family life, especially those socially-oppressed factions whose concerns the system cannot effectively address. Political subtext, Joon-Ho suggested, can be frequently associated with any kind of monster movie, not just his.

He was asked why, in the final scenes of the film, the family was not affected by the release of "Agent Yellow." "Good question," Joon-Ho quipped in English and his audience laughed. There's really no answer for that, but, the joke around the set was that the lower-income characters has a better resistance to the poison than the more refined upper classes who reacted by vomiting, collapsing, etc.

One questioner interpreted the fish spit out by the monster at the end of the film as some kind of "spore" or offspring, suggesting a sequel, since the original has done so well box-office wise. Joon-Ho qualified that the fish was not really a spore, it was just a spit-out fish, and no, he has no current plans for a sequel. However, he would welcome some other director stepping up to the plate to have a go or, if he were to undertake it himself, it would be exciting for him to correct the mistakes he made during the making of the original and to go further with the things he learned.

09/25/06 UPDATE: Doug Cummings has reacted to Bamako at Film Journey, emphasizing "Sissako's satire of transnational entertainments that use third world countries as exotic backdrops: the imagined Death in Timbutktu clip (starring Danny Glover and Elia Suleiman) is a hilarious rebuke of Hollywood hegemony."
Posted by Michael Guillen at 9/09/2006 10:15:00 AM