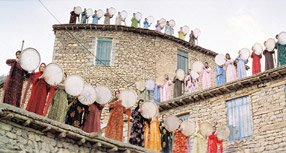 Each of Bahman Ghobadi's films have ravished me, infused as they are with his distinctive cinematic poetry, the landscapes of Kurdistan beautifully photographed and the humanity of the Kurdish people lovingly portrayed. A Time for Drunken Horses received the Camera d'Or and a FIPRESCI prize at the 2000 Cannes Film Festival. He followed this success with Marooned in Iraq (2002) and Turtles Can Fly (2004) and has now contributed Niwemang / Half Moon to the New Crowned Hope tribute in honor of Amadeus Mozart's 250th birthday.

Once again Ghobadi offers a cinematic journey across borders. In Half Moon, perhaps even more than in his previous efforts, Ghobadi reminds us that these borderlines are not just the arbitrary national ones enforced by governments and military regimes, but spiritual ones that demarcate corporeal zones from incorporeal ones, the natural from the supernatural, the literal from the transliteral and--perhaps most importantly--the political from the poetic. Why else--as in so many other totalitarian regimes--has poetry proven so threatening to those in power? Poetry articulates pervading currents of human truth that militaristic ideologies would readily and brutally discount. There is so much that is simply breathtaking and beautiful in this story of an effort of a group of Kurdish musicians who try to cross the border into Iraq to perform a concert in celebration of the fall of Saddam Hussein, who had forbidden their music. The inspired leader of this group, Mamo (Ismail Ghaffai), wards off encroaching death, not only in ominous visions but in precarious checkpoints he negotiates with heartfelt determination. With customary grace, Ghobadi uses humor to highlight moments of irridescent spirituality. In one of the most haunting and ethereal images in recent viewing history, the group of musicians seek out a singer in a village built into the mountainside that houses thousands of exiled women singers who, lined up on the roof eaves, beat their drums as one of their own leave with the company of men to attend the concert and with the thud of feet landing on the roof of the bus, the supernatural arrives to insure their anticipated celebration of freedom.

hi this is a fantastic movie but were can i download this movie or buy it.

do uknow how i can found this film?

do u online link for this film?

Rockurd, sorry to be so late getting back to you. Strand Releasing picked up Half Moon and has made it available on DVD. I'm not sure where you're situated but it is available for purchase and rental.