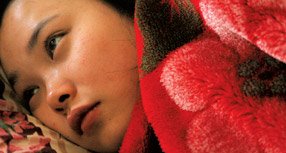 The last ticket I had for 2006 TIFF was Pen-ek Ratanaruang's much-anticipated Invisible Waves; a disappointing experiment in how an intriguing concept can have all the life sucked out of it despite a talented director, actor and cinematographer. Who should die? A good guy who is in essence a lonely wandering ghost on the face of the planet? Or a bad guy who is a happy man? Or the audience member who adored Ratanaruang's previous efforts and made the mistake of choosing Invisible Waves over Bruno Dumont's Flanders? I was crestfallen that my first experience of TIFF should end on such a dour dull note.

But Girish Shambu—who encouraged my attendance at this year's TIFF from the get-go—just wouldn't have it. Like a festival guardian angel, he swooped in with proffered vouchers and allowed me to accompany him to So Yong Kim's first feature In Between Days, which won a special jury prize earlier this year at Sundance and which has had a healthy festival run internationally. Darren Hughes and Lorraine Vendrely joined us at the film's Royal Ontario Museum screening.

In Between Days is "first love is beautiful hurt" Korean-style. As much as Alan Pakula adored the emotional mutability of Liza Minnelli's young face in The Sterile Cuckoo, so So Yong Kim capitalizes on the incredible expressiveness of Jiseon Kim's young face in In Between Days. Not to say that Pookie's quirky and exaggerated mannerisms in any way resemble Aimie's withdrawn depths, but when it comes to the complicated terrain of youthful heartbreak, affinities abound.

Commencing with the sound of boots crunching in icy snow, In Between Days guides the viewer into a wintry Toronto. Perhaps because I was experiencing Toronto for the first time, I found it sweet and familiar to have my first-time experience replicated on the screen with scenes that involved transit on TTC buses and Toronto's ubiquitous hotdog stands.

For her debut performance Jiseon Kim is simply lovely. I couldn't get enough of watching her face, which subtly expressed dislocation, infatuation, and the eventual "beautiful hurt" that will come on any given Saturday morning anywhere in the world. As Cameron Bailey writes in her festival capsule: "Jiseon Kim is a marvel as Aimie, her moon-shaped face reflecting the alienation and caution of a young immigrant, then transforming utterly when she breaks into a smile. Her letters to her father, narrated over interstitial winter tableaux, offer insights into her complex new emotions—but her face is even more telling." Aimie's reaction when her love interest Tran (Taegu Andy Kang) suggests sex for the first time is comic and priceless. Kang—also a first time actor—matches Kim scene for scene in understated authenticity. So Yong Kim has done an admirable job drawing out these natural performances from her "non-actors."

So Yong Kim responded informatively to IndieWIRE's rote Sundance questionnaire and expressed herself quite animatedly in her Sundance video interview with Flavorpill's Lisa Rosman. So Yong Kim, husband/producer Bradley Rust Grey, and (incredibly shy) actress Jiseon Kim were present for a Q&A after the screening.

So Yong Kim was asked to what extent her own background had anything to do with how she approached the material for the movie? She responded that when she first started to write this story, when she first wrote the draft, it covered about 30 years of Aimie's life and a lot of events from her life. That took about two months to write and then after that it took about a year and a half to cut it down and make Aimie an individual person away from her own self. It was a long journey from the beginning to what the film ended up being.

When you wrote the film, one audience member inquired, did you have Toronto in mind as the locale or is that something that just happened? 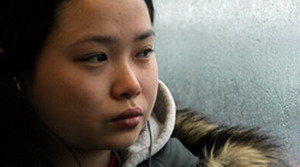 "I have to say," So Yong admitted, "it just happened because it was [originally] set in Los Angeles where I grew up. When we were in Los Angeles doing location scouting and also looking for cast and crew, I felt uneasy about it; it was too close to my own memories somehow. So we were looking for other places like New York or New Jersey; each have both huge Korean populations. But a friend of our's recommended Toronto because it has such a huge Korean population so they said we should check it out. We drove up from New York and somehow all the pieces fell in [place]. We found Jiseon in New Jersey and then right after that when we drove up [to Toronto] we met Taegu, the Tran character, in a nightclub. Then we met Jennifer Weiss, who's our co-producer and support group, and then we got in touch with a lot of Korean kids and Asian film communities and it all just came together at the right time that allowed us to make the film."

So Yong replied: "I didn't go to film school so I have to say I learned how to make films from my husband because I worked on his crew when we were making his film in Iceland. We had a crew of four people as well so I just learned by doing. But editing was the most difficult part of the filmmaking process for me because I was making very short experimental films before I tackled this project. We shot about 66 hours of footage and that was overwhelming. I had so much footage and there were so many possibilities because we shot a lot of little moments and we lived with Jiseon in the apartment that we shot in so it was 24/7. We would shoot constantly. When people ask us how many days did we shoot, I say 23 days, but we shot 24 hours a day so it was a lot longer than that. I had a lot of footage so it was a matter of just narrowing it down and slimming it down. What really helped was also having Brad as the supervisor so first couple of scenes that I cut I would bring him in and say, 'Hey, does this make sense?' and he'd go, 'Whoooaaaaa, people don't edit like that.' So it was completely experimental in the beginning and then I had to learn how to put the pieces together."

I thanked her for bringing the film to Toronto and mentioned that I found it sweet in its irresolution. I complimented Jiseon for her natural, lovely acting, which engendered a round of applause. I was curious about distribution; if she had found a distributor for the States?

She said they were looking for distribution but that it was very difficult "because—even though it's an American or North American film—it has so much Korean language in it and Korean culture." [Variety's Justin Chang has commented in his review that the film's minimalism might be a tough sell and that "despite its perceptive insights into the difficulties of adolescence and assimilation and Jiseon Kim's subtly expressive performance as a girl who's blocked off her emotions, So Yong Kim's glacially paced first feature won't command much of an audience beyond the festival circuit."]

So Yong was asked about the actors' backgrounds. She offered to let Jiseon speak for herself but Jiseon declined. So Yong then offered that Jiseon is currently attending school studying design. She's never acted before. Neither has Taegu. Actually all the cast were non-actors.

So Yong was asked to speak a little more about the locations in Toronto where she shot and she quipped that her producer was "kind of cheap" so that they basically found locations that were free. Jennifer Weiss helped them secure permits from the city to film on the TTC. Aimie's apartment belonged to their "production manager/boom operator/everything-else-only-crew-we-had." It was also his grandmother's, so they relocated her to his mom's house for a month while they lived there. Then they slept around in different places that were free and available.

Having mentioned that the story was initially set in California, though it was obviously filmed all in Toronto during winter, one fellow wondered if those changes came about by virtue of when the crew was in Toronto or was that purposeful on So Yong's part? "I hate to sound like hippie-dippy," she answered, "but, it seemed like all the stars came together for us to shoot it in January, which is the coldest time of the year in Toronto. Also, it added texture to it. Originally the film was set in the summer so the characters are hot and irritated but it happened that Jiseon had four weeks off for Christmas break and that's when we had the car. The day after Christmas, we drove [Jiseon] up to Toronto, introduced her to Taegu/Tran, then we started shooting the next day. I think that added to the urgency of the film. I have to say we used everything we [could] to our advantage. Everyone who was involved—there were only four people: Brad, Sarah [Levy] who was the DP, and Andy [Choi] and myself—we worked together to make everything useable."