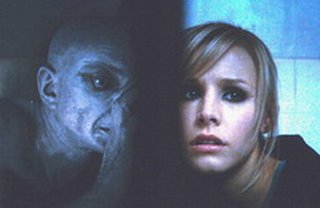 Pulse has confirmed a suspicion. When a publicist declines to have a press screening for a horror film before its opening weekend release, you can be sure they're more afraid of the press than the press is going to be of the movie. Pulse arrives at the cineplexes D.O.A.; that is, without a pulse. Jim Sonzero's remake of Kiyoshi Kurosawa's Kairo cannot be resuscitated no matter how many startle edits, loud screechy noises and cute collegiate bodies are jammed into this Wes Craven/Ray Wright script. Further, the film's cinematography is drenched in ubiquitous fluorescent-blue lighting that serves only to highlight how red the utility tape is that—for no reason whatsoever—keeps out the predatorial cyberghosts hungry for life.

As fond as I am of genre auteur Kiyoshi Kurosawa, I have to admit that Kairo didn't do much for me either. Partly because its edginess was compromised by a belated Stateside release but also because its reliance on the topicality of the Internet just couldn't hold up over time. It's a hazardous enough proposition to laminate old fears onto new technologies, let alone keeping up with those technologies. I was hoping that Sonzero's remake would do for Kairo what The Grudge did for Ju-On—Americanize it in some serviceably entertaining way—and though there are one or two things introduced into the remake that caught my eye—"actress" Kristen Bell caught in a nightmare of limbs and a fly melting into its own shadow—my hopes crashed along with the rest of the system and never really rebooted. Especially when the ghosts start throwing wet socks out of the laundry machine. You'd expect that out of a mischievous Casper perhaps, but not electronic specters intent upon subverting civilization as we know it. Then again, lost socks at the laundromat is as much a metaphor for the end of the world as anything else, I guess.

If anything, the remake has helped me appreciate the original a bit more, especially its eerie ending of a jet in flames crashing into the besieged city, which was shamelessly appropriated for the remake. At least with Kairo, Kurosawa's signature pervasive dread leaning towards the inevitably creative possibilities of apocalypse sustained some atmospheric interest. Pulse, on the other hand, is the first time I've been tempted to stand in front of a movie audience and ask that they turn their cell phones back on.
Posted by Michael Guillen at 8/14/2006 04:32:00 PM