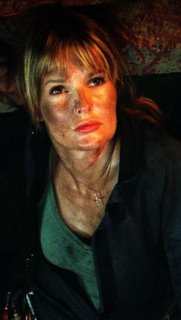 Saskia Mulder, who hails from the Netherlands, is excitedly enjoying her first visit to Los Angeles to promote Neil Marshall's The Descent. She took time to talk to me about the film. Brought into the project via the usual casting channels, Saskia won the role of Rebecca, the "safety girl" of the film's ensemble of women.

Michael Guillén: What was it like working with the ensemble of actresses?

Saskia Mulder: Fantastic! There's something about six girls working together—it could be great but it could also be horrible—but it was so much fun. The shoot was tough and physically grueling so coming in every day at 5:00 in the morning and finding five of your new best friends; it was just really nice.

MG: My understanding is that Rebecca was supposed to be the most experienced caver among the group, the "safety girl." Did that require you to train even more than the others?

Saskia: We all trained the same. Basically, we really had a boot camp. I've never had so many bruises and walked around with that much muscle ache in my life. The training was really tough but it was good preparation for the parts, not only physically but mentally as well. We went caving. I had to learn to offroad drive. We did ab sailing. We climbed a lot. It was just really good fun to learn.

MG: Have you continued on with that? Are you still caving or climbing?

Saskia: I still climb a little bit but the caving—when we went caving I loved it so much—honestly, I really felt they were some of the best days of my life. But since seeing the film, I don't dare to go anymore. When I was doing it, I absolutely loved it but seeing the film, you kind of see all the things that could possibly go wrong and suddenly it doesn't seem like such a safe idea anymore.

MG: I think that's why they call it an extreme sport. The film was shot at the Pinewood Studios in Scotland and I understand it was a difficult, uncomfortable shoot. Can you speak a little bit about that?

Saskia: I don't think I have ever experienced such fatigue and cold in my life. Because it was in the Pinewood Studios, but, due to safety regulations basically it's almost like it's open air. It was very cold. Winters there get very cold and very wet. On top of that, the caves were always wet, so we had about six weeks of being absolutely drenched in two degrees. So after a while you're a little tired of it.

MG: I bet. During the shoot it's my understanding that Neil kept the "crawlers" hidden from each of the actresses until the moment you encountered them in the script. What was that like, not knowing what they were going to look like? And what did you think when you first saw them? Saskia: I think it was very clever of him to do that because, not knowing something, it's almost like getting on a roller coaster [while watching other] people get off and seeing them being really freaked out. That adds to your own excitement. We were really excited the day we were going to see them because obviously we knew from the script that that was going to be the day. Neil sat us down. He said, listen girls, you're going to see a crawler. Now what I want you to do is just react as you would but stay within those parameters. And we all said, "Yeah, yeah, okay, sure" and the moment we saw one we were all at the other end of the studio within seconds because it was just sooooo scary! [Laughs.]

MG: They definitely are scary! I had to keep apologizing to this girl next to me because I kept screaming at the top of my lungs.

Saskia: That's absolutely hilarious. The creatures, they're physical theater actors, so they're real people, and the first two days between scenes they would just come up and say hi and have a chat and I couldn't talk to them! They were just so scary. I honestly the first two-three days could not look at them; but, then after a while, you look at them and these poor guys are as ice cold as we are only they're not wearing many clothes and they can't get a blanket or something because of the make-up. I kept feeling very motherly towards them, "Are you all right? Do you want a cup of tea?" [Laughs.]

MG: I assume you've been traveling with the film and that you've been in audiences where it's been shown; what's that like to register the audience response? 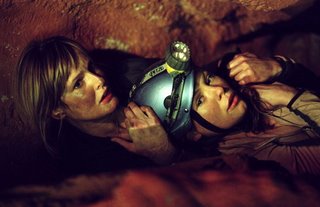 Saskia: It's amazing. At horror films there are such direct responses that people have, if it's a good one. We've traveled around half of Europe with the film so I've seen the film fifty thousand times but every time I love seeing the audience's reaction because I know when they're going to jump and I know when they're going to be scared. You can actually see the audience—for example, when the cave collapses, you can see the audience squirming around in their seat. It's almost as if they're in the cave themselves. When there's a lot of dust, people start coughing a lot, because the film just gets under your skin. People just get into the film and I love watching them.

MG: When I was talking to Neil the other day, I told him it was like he had created three separate horror films—the first with the car accident and the psychological repercussions of that, and then the claustrophobia of the cave, and then the all-out rampage of the crawlers—so at least one of the three's going to get to you. I can imagine how much fun it would be to watch the audience.

Saskia: I agree with that analysis.

MG: So what's next for you? I imagine The Descent is going to expose you to a large audience who will be looking to see what you do next. What are you working on now?

MG: Well, I'm glad to hear that. All six of you did such a fine job in The Descent, it's a genuinely frightening film, and I thank you for taking the time from your L.A. publicity tour to talk with me, Saskia.

Saskia: Thank you very much!

Cross-posted on Twitch. A condensed version of this interview has been published in Entertainment Today.
Posted by Michael Guillen at 8/01/2006 06:33:00 PM