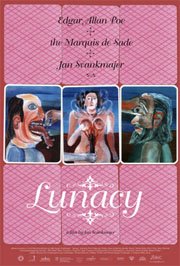 Svankmajer appears twice in his most recent feature, as one of the patients in the art therapy sequence flinging paint at a bound corpulent model but more notably at the film's beginning where he introduces Lunacy under annoyingly poor lighting conditions. Cinematical's Ryan Stewart likens this unto James Whales' Frankenstein, in which Edward van Sloan appears on a stage to warn audience members of the disturbing horrors about to be revealed, though it reminded me more of William Castle before some of his best or Hitchcock prefacing his television episodes; an odd kind of sideshow barker showmanship capitalizing on prurience.

In cinematographer Juraj Galvánek's poorly-lit introduction, Svankmajer asserts: "Ladies and Gentlemen, what you are about to see is a horror film—with all the degeneracy peculiar to that genre. It is not a work of art. Today, art is all but dead anyway. In its place is a kind of trailer for the reflection of the face of Narcissus. Our film may be regarded as an infantile tribute to Edgar Allen Poe, from whom I've borrowed a number of motifs. And to the Marquis de Sade, to whom the film owes its blasphemy and subversiveness.

"The subject of the film is essentially an ideological debate about how to run a lunatic asylum. Basically, there are two ways of managing such an institution—each equally extreme. One encourages absolute freedom. The other, the old-fashioned, well tried method of control and punishment. But there is also a third one, that combines and exacerbates the very worst aspects of the other two. And that is the madhouse we live in today." 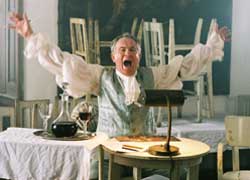 That sounds vague at first but, if you think about it—and Svankmajer hopes you will—it's pretty straightforward. The two Edgar Allen Poe stories Svankmajer has melded together with the blasphemous ribaldry of the Marquis de Sade are "The Premature Burial" and "The System of Dr. Tarr and Dr. Fether." In gist Svankmajer's ideological horror film is about a young man Jean Berlot (Pavel Liska), mourning the recent death of his mother, who suffers from paranoid dreams of two bald-headed orderlies trying to fit him into a straightjacket. In his somnambulate resistance Jean destroys the furniture in his room and has to be slapped awake to calm down. In the morning the Marquis de Sade (Jan Triska) mollifies the innkeeper by paying for the damage to the room and whisks Jean away in his carriage to the heart of the movie's madness. Which is to say that unexpected generosity can be as much a straightjacket that gets you to the sanitarium just as expeditiously as the more familiar offwhite wraparound. Beware marquises offering lifts. 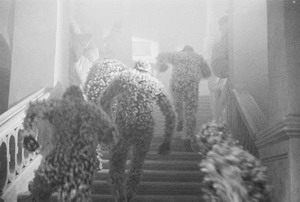 The sanitarium is topsy-turvy. The patients reign and the doctors and their staff have been tarred and feathered and locked away in the dungeon. Chickens are running rampant everywhere, people are banging their heads against the wall and sliding down stair railings, and the air is feathered with ubiquitous pillow fights reminiscent of my college dorm days. In the interim, Jean has become smitten with Charlotte (Anna Geislerová) who appears at first voyeuristic glance to be victimized by the Marquis' sexual and blasphemous tortures. Charlotte alerts Jean to the fact that things are not as they should be at the sanitarium. Under her advice he frees the interred (intarred?) hospital staff only to discover that what she really wanted was to be punished by the hospital administration. Apparently the Marquis de Sade wasn't quite satisfying her nymphomania whereas the hospital director Dr. Coulmiere (Martin Huba) has specially ordered from Paris some kind of strap-on device to subjugate her wanton physicality. Frustratingly, you never get to see it, which made my imagination run as rampant as one of the sanitarium inmates.

Beginning with its international premiere at Rotterdam, and continuing on to Tribeca, and soon to open stateside, Lunacy is considered to be—depending upon who you believe—Svankmajer's "masterpiece, surpassing even Faust in pure inventiveness" (Jonathan Marlow for Greencine Daily); "the apotheosis of his career, if not his masterpiece" and "a forceful argument for the primacy of the body and its senses over the mind and rationality" (Leo Goldsmith in his outstanding review for Not Coming To A Theater Near You); or, at the very least, "reassuringly Svankmajeresque" (Alison Willmore for IFC). It's certainly not for everyone though absolutely satisfying for some. Choose your camp. 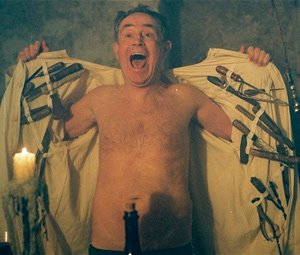 Much has been made of Lunacy's purposely disorienting anachronisms—the Marquis' 18th century horse-drawn carriage travels contemporary Czech freeways—though there's not a complete consensus that these are true anachronisms. Salon's Andrew O'Hehir suggests that what's actually being depicted is the Marquis' particular brand of madness, he is living "as if it were the 18th century, in defiance of the world of cars, motorways and prefab housing around him" (italics mine). That interpretation—as interesting and unique as I find it—chafes against the film's continuity. Besides, under the aegis of surrealism, such rational distinctions hardly matter. Perhaps it's more as Steve Erickson proffers in Gay City News that the evocation of several different historical periods is ultimately to use the past to speak about present dilemmas.

Which is to say that Svankmajer's surrealism—particularly in Lunacy—is of political service. Like so much of the surrealism of the former Czechoslovakia, Leo Goldsmith reminds us that throughout their careers, "Svankmajer and his longtime collaborator and wife, the painter and author Eva Svankkmajerová (who died shortly after this film was completed), have practiced surrealism as an ethos, as a challenge to law, hypocrisy, and the regimes of realism. For them, surrealism is not a poster on a dorm-room wall or a wacky album cover, but a revolutionary statement, and, under state socialism, a punishable one." He drives the point home: "Surrealism, in other words, is not fantasy, but a sensibility, a way of life; it is an approach to the world, not a retreat from it." Steve Erickson further qualifies that Svankmajer's political surrealism still retains a radical charge "which has long since been co-opted by art world acceptance and pop culture dilution in the U.S. and Western Europe." That, I suspect, will be Lunacy's main hurdle among American audiences.

It's Lunacy's intermittent meat puppet animations scored to harpsichord music that not only—according to Manohla Dargis—trump the live-action sequences, but provide ready interpretations of Svankmajer's overarching theme. They suggest not only "the dumb fleshiness of humankind, but also the indomitable will of corporeality" (Goldsmith); or that the "revolutionary switchbacks from 'tyranny' to 'freedom' and back again make little difference to human beings, whom [Svankmajer] sees as instinct-driven meat puppets pursuing primitive gratification" (O'Hehir); or that "all the human antics on the screen amount to little more than dancing meat, briefly activated by the spark of life, but destined to collapse and rot" (Tasha Robinson for the A.V. Club). "Playfully," Steve Erickson interprets, "he's messing with the boundaries between life and death. Although the meat never does anything too horrific, it evokes the sexually transmitted parasites of David Cronenberg's They Came From Within. As a symbol, it's a constant reminder of the characters'—and the audience's—physicality."

Frankly, I found it disturbing enough that tongues and eyes and slabs of meat would be wiggling around, sloshing through mud, and fornicating, but what I found most disturbing was the film's final scene of pieces of meat trapped under supermarket shrinkwrap (a pun, perhaps, on psychology itself?). As if to say all of us have become packaged goods or, at the least, that surrealism commodified has lost its freedom.

08/19/06 UPDATE: Not to be missed is Jonathan Marlow's Greencine transcript of Simon Field's onstage discussion with Svankmajer at the Rotterdam premiere of Lunacy. "Surreptitious" or not, his relayed reportage of same is excellent and welcome.
Posted by Michael Guillen at 8/19/2006 02:57:00 PM

August 25 cannot arrive swiftly enough for me. I've been hotly anticipating this one since I first noticed it had an imdb page up last summer.

I'll be very anxious to hear your reaction, Brian.