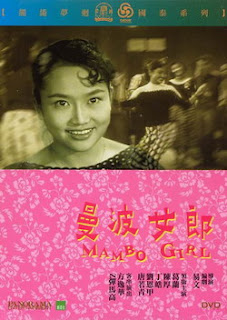 Following Roger Garcia's cue to view Grace Chang's work in Mambo Girl and Wild Wild Rose in anticipation of the screening of Tsai Ming-Liang's latest, The Wayward Cloud, at the upcoming San Francisco International Film Festival, I ordered both from HKFlix.com and they arrived two days later. I treated myself to a big cup of coffee this morning and a Grace Chang doublebill. I'm here to report that both films are great fun!

As HKFlix capsulizes: "Blending all the elements of the musical genre and the coming-of-age films, Mambo Girl tells the story of a young woman (Grace Chang/Ge Lan) in search of a lost identity, her long lost mother who abandoned her soon after her birth. Instead of a happy ending of familial reunion, the film rather unusually ends on the girl's acceptance of her foster parents as real parents, with the mother quietly retreating into the darkness of the night. This theme perhaps signifies that identification of the post-war younger generation with Hong Kong as their roots. There are eight musical numbers in the film and each is handled and executed with finesse and style, at the same time fully demonstrating the musical talents of Chang. A huge box-office hit at the time of its release, the film easily stands as one of Hong Kong cinema's all-time favorites."

Mambo Girl's opening credits provide a sequence of an Asian Barbie in provocative poses and then launches right into its first musical number with Chang as 19-year-old Kailing, sporting a bobbing ponytail and singing and dancing her way into the hearts of practically everyone, especially her beau Danian who wants to throw her a birthday party. The only exception to her overall popularity is Kailing's rival Meilun who covets Danian's affections. Otherwise, you've never seen a girl so popular in high school!! I would call her the Lesley Gore of China. Sunshine lollipops and rainbows everything. Mambo Girl is so over-the-top (dare I call it camp?) and refreshingly unbelievable that it's downright entertaining. Inadvertently, Kailing's young sister Baoling discovers from her mom and dad that Kailing is adopted and, in a moment of poor judgment, reveals same to Kailing's rival Meilun who—at Kailing's birthday party—just has to spill the beans and ruin all the fun. But then again, it's Kailing's birthday and she can cry if she wants to, cry if she wants to, cry if she wants to. You would cry too if it happened to you. Honest.

In her fascinating 2003 Senses of Cinema article ("The European Undead: Tsai Ming-liang's Temporal Dysphoria") Dr. Fran Martin notes: "The ghost, uncanny manifestation of the past within the present, is no stranger to Chinese film and television screens." Her statement thus defines a haunting as a temporal imposition of the past into the present, not necessarily requiring death. A projective longing to retrieve the unknown past—such as Kailing's curiosity about her real mother—can likewise sponsor such a visitation, as depicted in the scene where Kailing climbs to the roof to be alone and encounters the ghost of her mother crying for the child she had to abandon to the orphanage. 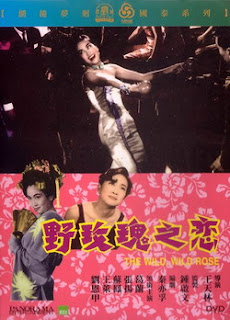 The later film—Wild Wild Rose—highlights Chang in a more mature role as Sajia, a blend between Bizet's Carmen and Josef von Sternberg's The Blue Angel. Though I can't quite say Sajia has duende, the film is rich with flamencano flourishes. Sajia starts out just as ruthless as Carmen by tempting a young man away from his fiance into a life of ruin, but ultimately she's goodhearted. It's not her fault she drives men crazy with desire. Not only does Chang impersonate a Latin femme fatale in Wild Wild Rose but she poses as a contrite geisha as well (but, only to land a nightclub audition).

As HKFlix.com capsulizes: "The Wild Wild Rose is undoubtedly one of the classics in the Hong Kong cinema in every sense of the word. Grace Chang (Ge Lan) gives her most mesmerizing performance as a sensuous singer who seduces and destroys (both herself and the man she loves). She is nicely complemented by Zhang Yang as the inexperienced piano player who falls for her. The stylized production design and the cinematography of the film also set a high standard among the films of its kind. The songs by Japanese composer R. Hitori are memorable. But most surprising of all is the immaculate mise-en-scene of veteran filmmaker Wang Tianlin."

Frank Bren included Wang Tianlin's Wild Wild Rose in his Senses of Cinema 2001 top ten archive list, describing it as "Wang's film noir take on Bizet's Carmen (starring the stunning Grace Chang)." Bren further notes that Hong Kong films of the '50s and '60s "concerned frustrated love" and were made "moving" thanks to great female stars of the era like Grace Chang.

Charles Leary in his Senses of Cinema report from the 40th Golden Horse Awards states that one of the familiar traits of the Cathay melodrama of the 1960s is the characterization of its male leads as victimized and pitiful. Further: "As in many Cathay films, the women are the real attraction, particularly the great singer and dancer, Mambo Girl Grace Chang."

Lisa Roosen-Runge's Senses of Cinema report from the 26th Hong Kong International Film Festival (March–April 2002) included a profile of the Hong Kong Film Archive (HKFA) series of classic Mandarin films presented during that year's festival. She outlined that "[t]he Cathay studio started operating as MP & GI in Hong Kong in 1957, and produced roughly 250 films in the following decade. . . . These films often have similar casts, with character actors from amongst the studio group of actors. You can even start to recognize the furniture on the sets. . . . Wild, Wild Rose by Wang Tianlin is a great film experience. Starring the dynamic Grace Chang, it is in one sense a reworking of the Carmen story. The Grace Chang character is a nightclub singer who generally chews up the men infatuated with her. The musical segments are really stunning—in one number she rises from below the floor for a flamenco-style tap dance! In this film she spits, drinks alcohol and has her dress split up to her navel. . . . The ill-destined male lead, Chang Yang, plays out the typical path of his characters—he makes generally wrong decisions and is a great example of what Stephen Teo calls the 'weak romantic hero' [Stephen Teo, Hong Kong Cinema: The Extra Dimensions, BFI, 1997, p. 76]." Roosen-Runge saw Wild Wild Rose near the beginning of the festival and had to admit that very few of the modern films she saw could match its intensity.

All that being said, there can be no question that it has been Tsai Ming-Liang who has reawakened an appreciation of the vibrant talents of Grace Chang through his incorporation of her vocals into his movies, particularly The Hole. But why has he chosen to do so?

Brian Hu's 2003 Senses of Cinema analysis of Tsai Ming-Liang's The Skywalk is Gone notes that the film is "nostalgic for three kinds of film: the popular Mandarin Chinese films of the '60s, the films of the Taiwan New Cinema of the '80s and '90s, and the films of Tsai Ming-liang himself. By longing for three major waves of Taiwanese film history, the film demonstrates the interminability of nostalgia for the cinema. From each passing epoch develops a new cinematic tradition to miss.

"As in The Hole (1998), The Skywalk is Gone communicates with 1960s Chinese cinema through popular song. Famous outside of Asia for its martial arts films, 1960s Hong Kong cinema also saw a flourishing musical genre. Among its most popular stars were Lin Dai and Grace Chang, the latter's songs appearing prominently in The Hole. Tsai has cited these early musical films as direct influences on his own filmmaking . . . ." The musical numbers from The Hole come "from an earlier era of Mandarin music extremely popular in Taiwan in the 1960s" and perhaps signify "an escape from the dull urban sounds of the city."

Fran Martin writes in her Senses of Cinema article referenced above: "Although the major question addressed in this paper is about the relation between recent Taiwanese film and European art cinema, it is worth noting at the outset that Tsai's films also perform parallel citations of Chinese cinemas. This is apparent, for example, in the casting of Miao Tien, who is best known to local audiences from his roles in over 100 of the Taiwan and Hong Kong swordplay genre (wuxia) films of the 1960s and '70s, including the films of veteran swordplay director King Hu (for example Dragon Gate Inn [1966] and A Touch of Zen [1970]). Miao Tien has also worked with Tsai in three of his previous films, Rebels of the Neon God (1992), The River (1996) and The Hole (1998). The Hole, in turn, is punctuated by song-and-dance numbers featuring the songs of Grace Chang (Ge Lan), star of many 1950s Hong Kong musicals (for example Mambo Girl [1957], Air Hostess [1959] and Wild, Wild Rose [1960]). Comparably, in What Time, at the video stall where Hsiao Kang buys a copy of Truffaut's The 400 Blows, we overhear another customer asking for films starring Grace Chang, Yu Ming, or Lin Dai. This double citation of European art film, on the one hand, and popular Taiwan and Hong Kong cinema, on the other, demonstrates that cinematic citation in Tsai's films is in itself a complex, hybrid practice, rather than any simple emulation of European film modernism."

Nanouk Leopold in an interview with Tsai Ming-Liang for Senses of Cinema asked him directly about that scene: "In the beginning of the film there is a scene where someone in a video-store asks for a Yu Ming, Lin Dai or a Grace Chang movie. What kind of films are these?"

Tsai Ming-Liang responded: "These are films from the '50s and '60s and also some from the '70s. Yu Ming, Lin Dai and Grace Chang are the great stars from the Hong Kong films of my childhood. In my film The Hole, I used some songs by Grace Chang. I am always searching for videos of these films so I can watch them again. And when I look at them I always think: they have really gone, they exist no longer in this world, there are no stars any more like in those days. And then I think: I am really not up-to-date, I am living in the wrong period if I like these films so much."

Perhaps the reason Grace Chang became a diva for Asian queers is the same reason that several Hollywood actresses became icons for American queers. Nostalgia for golden eras past lend a religiosity to memory. Perhaps the nostalgia felt when seeing these old films, whether from the Cathay/MP&GI or the Hollywood studios is not so dissimilar, and not so much about a time gone by as it is about feeling displaced from the time one lives in and the current cultural attitudes one endures. Tsai Ming-Liang seems to admit so himself. A certain surrogacy is sought in cinematic representations of yesteryear. Entrusted to the larger-than-life women of the silver screen are experiences—perhaps imagined experiences, perhaps desires—of who they might have been in another less realistic time?

05/09/07 UPDATE: Pink Lotus, by comment to this entry, alerted me to Pink Lotus's own entry that includes not only a link to Grace Chang's official website (with that lovely photograph of her) but also incorporates a YouTube clip from Mambo Girl, and a fact-filled write-up.
Posted by Michael Guillen at 3/24/2006 04:24:00 PM