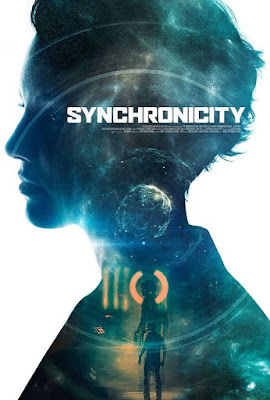 Jacob Gentry's Synchronicity (2015) had its world premiere at last summer's Fantasia International Film Festival where my review for The Evening Class stated: "With its stylish evocation of Ridley Scott's Blade Runner (1982), homage becomes—for genre fans, at least—a form of time travel. However, Synchronicity is less a replicant than its own atmospheric application of noir aesthetics to a sci-fi narrative about time looping through parallel universes. Although we've seen this premise before with such films as Timecrimes (2007), Looper (2012) and Time Lapse (2014)—and the requisite effort to bring compromised timelines back into alignment—Synchronicity admirably maximizes the bang for its buck and delivers an elegantly-mounted puzzler with swank art direction by Jenn Moye that looks like it was created with a considerably heftier budget, bolstered by Ben Lovett's melancholic score that recalls Vangelis without losing its own significant character."

My conversation with Gentry and his lead actor Chad McKnight followed shortly thereafter. Synchronicity is now poised to rollout on multiple platforms. Theatrically, it opens today at the Sundance Sunset Cinema in West Hollywood, California; the Plaza Theatre in Atlanta, Georgia; the Lake Worth Playhouse in Lake Worth, Florida; the Jean Cocteau Theatre in Santa Fe, New Mexico; and the Gateway Film Center 8 in Columbus, Ohio. This compelling mindbender is also available on demand at numerous streaming sites, including Amazon, iTunes, VUDU and YouTube, among others.