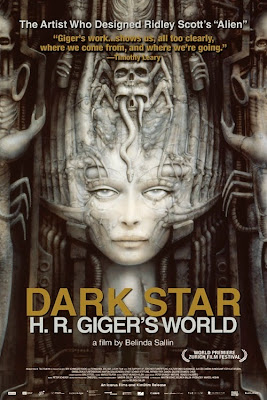 The dark brilliance of H.R. Giger's visionary imagination is undisputed. Catapulted into international fame for his contributions to the visual effects and creature concepts of Ridley Scott's Alien (1979)—which rightly earned him an Oscar®—Giger's death in May 2014, a few months after the completion of Belinda Sallin's documentary Dark Star: H.R. Giger's World (2014) adds a last-minute timeliness to Sallin's efforts. The result, however, is an artless if respectful look at an aged, infirm artist hobbling around a tumble of artifacts in his studio. Though the allure of Giger's insular world is understandable, Sallin's failure to make much use of her access to provide much more than a prolonged, lugubrious tracking shot of his cluttered abode is a lost opportunity.

Granted, Giger's failing health might not have allowed him to be forthcoming for the cameras; but, the film's plodding pace might have found some uplift in archival footage of Giger when he was young and at his most vigorous. No doubt, rights issues with 20th Century Fox allowed for only the briefest glimpse of Giger at work on the set of Alien, which would have been fascinating, and there wasn't even a mention of his aborted efforts for Jodorwosky's Dune. Other than for Czech psychiatrist Stanislav Grof whose work with transpersonal psychology and LSD cancer therapy granted some credence to his ascription of Giger's visions of perinatal trauma, most of the talking heads in this documentary are dull with nothing more to add than that "there is light in his darkness." Timothy Leary was quoted on the film's poster so why not a bit from him in the film? This is one of the few instances where I might have preferred a voiceover narrator providing key biographical information and insight into the artist's methodology. I came away with as much of an appreciation of Giger's art as ever before, but wishing I'd learned more about the man other than this numbing chronicle of his sad stumble towards death.
Posted by Michael Guillen at 5/11/2015 07:22:00 PM