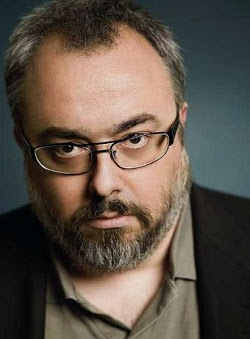 As luck would have it, the bevy of journalists clamoring to query Álex de la Iglesia at the inaugural edition of the Panamá International Film Festival (Panamá IFF) happened to be in the wrong place at the right time (at least as far as I was concerned). Assembled on the sixth floor veranda of Panama City's Hotel Meridien, the journalists were unaware that de la Iglesia was waiting downstairs in the lobby. As was I. Thus, I had a window of opportunity before the throng advanced to ask de la Iglesia a few questions about his latest film La Chispa de la Vida (As Luck Would Have It). I now offer the transcript of that conversation on the occasion of the film's Canadian premiere at the 2012 edition of the Fantasia International Film Festival.

Compared here and again to Billy Wilder's Ace in the Hole (1951), La Chispa de la Vida is arguably de la Iglesia's most accessible film to date, though some might argue it is de la Iglesia-lite. Further, as noted by Jonathan Holland in his Variety review, the literal translation of the film's Spanish title (The Spark of Life) would be not only accurate but more appropriate since "The Spark of Life" references the successful advertising slogan that made an aging and down-on-his-luck publicist a one-shot wonder for the Coca-Cola company. Just as Chuck Tatum (Kirk Douglas) fanned a media blaze around the tragic plight of trapped miner Leo Minosa, an equal fervor surrounds beleaguered Roberto Gómez (José Mota) who—after an accidental fall in the ruins of an ancient coliseum—has found himself pinned to a life-threatening situation. As Panamá IFF's program note details: "From there we're taken on a non-stop freak show of desperate civil functionaries trying to conceal their liabilities, media network execs showing their money teeth to get exclusive rights to broadcast live the agonizing drama of Roberto's family, and the vulture audience that fills the classic coliseum where the events unfold."

Director, producer, writer and cartoonist Álex de la Iglesia holds a degree in philosophy from the Universidad de Deusto. His career in film began with the short Mirindas asesinas (1991) and his first feature film was Acción mutante (1993). His provocative dark comedies such as The Day of the Beast (1995), Perdita Durango (1997), Muertos de risa (1999), The Commonwealth (2000), 800 balas (2002), Ferpect Crime (2004), The Oxford Murders (2007) and The Last Circus (2010) have earned him a celebrated following few Spanish directors enjoy. His films cross borders and genres, and have helped bring new audiences to the world of Spanish-language cinema. Because of his ability to transcend, to travel and engage across the boundaries of language, de la Iglesia was fêted with a five-film showcase at Panamá IFF. [This conversation is not for the spoiler-wary.] 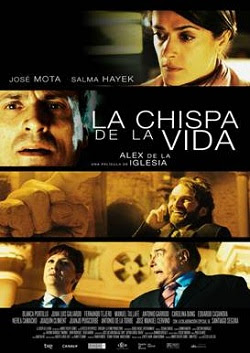 Michael Guillén: Álex, what I appreciate most about your films is that they are genre hybrids and that, as a spectator, I can feel when you are shifting from one genre into another. Arguably, La Chispa de la Vida could be understood as a horror film in the sense that the dilemma of your protagonist Roberto reflects the horror many people are currently experiencing as victims of the economy, losing their jobs, and being unable to control the corporate forces negatively impacting their lives; but, at the same time, your film is a comedy. Is that particular sensorial quality of shifting from one genre to another something you intentionally work into your scripts?

Álex de la Iglesia: It's not that conscious of a process; but, I have to say that's how I feel life works. I can't believe in just one genre because I don't trust people. Nobody's just honest. Nobody's just humorous. It's always a mixture within each person. Everything is mixed. In every day of your life you will have beautiful moments, honest moments, and dignified moments; but, you will also have ridiculous moments. It's all mixed up together.

Let's say you go to a funeral and—as you are standing there beside the grave—you realize how the life you had with this guy is suddenly dead. You feel all the love and remember the beautiful and funny moments you had with this guy. And you begin to cry. Then suddenly something stupid happens and you can't help but laugh. Because nothing is perfect. Nothing works. In the same moment that you are suffering, you are laughing and vice versa. One moment you're having a really good time with your friends when, suddenly, your soul takes a big hit because someone comes up to you to tell you your mother is dying or your father is dying. Nothing is perfect. Life is a confusion of sentiments. Thus, it's absolutely impossible for me to make the kind of genre film that an audience might expect and adore.

I love genre films. I love comedies. I love dramas. I understand that the work of cinema is to know the feelings caused by certain genres to best express life. But I can't make a film in just one genre because, as I said, life isn't like that for me. For example, in La Chispa de la Vida there's the scene where the main character Roberto is talking with his son and says, "Hey, now we'll have money. And now you can do whatever you want in your life. Try to be free. Try to be honest with yourself." In that intimate moment his son unknowingly steps on him and—seeing his dad in sudden agony—asks, "Dad, are you dying?!" To which Roberto answers, "No, you're stepping on me." [Laughs.] 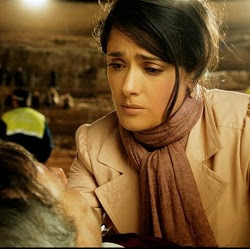 Guillén: Both dark and funny, yes. Along with Mota's lead portrayal of Roberto, I was particularly impressed with Salma Hayek in the role of Roberto's wife Luisa. For me, she embodied an integrity that went past surface appearances.

De la Iglesia: I don't want to destroy everything. I don't think that's fair. We need some kind of dignity. In this movie, that dignity is in the hands of a woman. Salma plays Luisa, a regular woman, a normal wife, who tries to be charming for her husband and honest with her family and her relationships; but—in this moment of crisis—she realizes that she has made a big mistake. She has been encouraging her husband, telling him, "Someday you're going to win. Someday you're going to get a job"; but, at the end this is not possible and she realizes that trying to be positive all the time has been a big mistake.

Guillén: There was that moment of exquisite suspense when Luisa is offered the valise of money in exchange for media rights. The film sardonically skewers so much hypocrisy up to then, that you don't quite know if she's going to take the money or not. I was glad she didn't and grateful for that grace note of integrity.

De la Iglesia: Though many people in Spain have asked me, "Why didn't she take the money? It would be better for her family and would give them financial security."

Guillén: That particular scene likewise accentuates a characteristic rhythm in your work. Often your films go to excess and then—as in this scene where Luisa walks past the valise of money—you suddenly exercise restraint, which restores dignity.

De la Iglesia: Thank you very much for that. That is the idea of the movie. The idea of the film is about what happens to people when they don't have time to think about what to do? Because, in truth, that's how life often is. Everything rushes by so fast that a person doesn't have time to think much past the moment. They don't know what to do about the future. Suddenly they find themselves near death and they wonder, "What do we do now? What sense can be made of my death?" That's why I wanted to make this film. To give audiences the chance to think about these things. In the first half of the film their sympathies are with Roberto and his plight, but in the second half their sympathies are with Luisa and what she's going to do after Roberto's death. This is how I found the rhythm for this film. 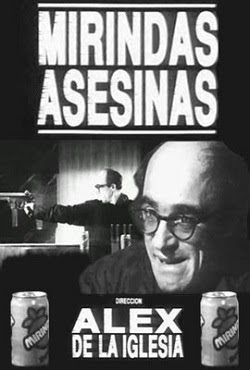 Guillén: You're known for your repertory casting, using the same actors again and again in your films. I was watching your early shorts, specifically Mirindas asesinas (1991), enjoyed the central performance of Álex Angulo, and then noted you cast him again in The Day of the Beast (1995). And the actor who played the doctor in La Chispa, I've seen in your other films. What is the value of repertory casting for you?

Guillén: How then do you negotiate the problem of audiences identifying more with recognized actors than with the characters they're intended to portray? Because, admittedly, as a filmmaker you're trying to create a fiction, an illusion, so does the fact that their faces are familiar hinder your storytelling in any way?

De la Iglesia: But that's what I'm trying to do! I know I need a certain kind of face or a certain kind of reaction so that makes me use the same actor again who I know will give me the reaction I need. I know, "This guy is good to say this sentence or that dialogue." At the same time, to make movies is a game. For example, José Mota is not really an actor; he's a comedian. I mean he's a wonderful actor for me, but in his "real" life he's a comedian. He primarily works on Spanish TV. So it was something of a shock to Spanish audiences that I cast José Mota in a serious role, which was like casting Jerry Lewis in a serious role. Martin Scorsese did just that when he cast Jerry Lewis in The King of Comedy (1983). The idea to use José Mota in La Chispa de la Vida was a joke, a bit of a naughty joke, because I needed a comedian to make this drama work. I knew it would put the audience in an uncomfortable space because they expected to see this guy crack a joke and suddenly there's no joke. I knew it would upset audiences to see José Mota suffering. It's not exactly my idea. Scorsese already did this with The King of Comedy. Using a funny guy to tell a sad story.
Posted by Michael Guillen at 7/05/2012 07:44:00 AM