I've been sampling the Pacific Film Archive series "A Woman's Face: Ingrid Bergman In Europe", curated by Susan Oxtoby focusing on the work of the actress before her Hollywood heyday. Though nearly complete, the series extends with two more entries: Roberto Rossellini's Voyage in Italy (1953)—which has been enfolded into Pedro Almodóvar's most recent film Los Abrazos Rotos (Broken Embraces, 2009)—and Ingmar Bergman's Autumn Sonata (1978), Ingrid's last performance tinged by Ingmar's "Nordic blues."

Admittedly, I was out of town for the first half of the series, which featured Ingrid Bergman in Swedish films from the '30s. But this was a minor regret as my interest was primarily in the three Bergman/Rossellini entries in the PFA series: Stromboli (1949), Europa '51 (1952) and Voyage to Italy (1953). I'll be writing about that triad in more depth in coming weeks; but, wanted to respond immediately with a visual flush of desire to Rossellini's Stromboli. 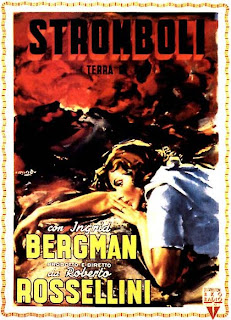 I watched Stromboli with Brian Darr and Ryland Walker Knight. Both of them rushed to Twitter to tweet their reactions. Darr: "Like Howard Hughes suggested, it's a documentary on Ingrid Bergman's isolation in a community she's too deep for." And Knight extolled Bergman's beauty (he called her a "hottie"). That's to be expected, of course. As Judith Clark has described in the program notes: "Bergman's radiant looks and her distinctive combination of sensual directness and exquisite sensitivity" are, indeed, "evident."

But if the launch of the 21st Century is to mean anything, it must acknowledge the gendered parity of seeing, and film's complicity with desire, especially to readings of cinema. "There is no difference in desire," queer songwriter Steven Grossman sang, "I used to wander with my father's violin."

And so I turn to the men in Stromboli, whose beauty I found counterpart to Bergman's: Mario Vitale and Mario Sponzo, both former fishermen discovered by Rossellini in 1949 who he later featured in Stromboli. Mario Vitale played Bergman's well-meaning but provincial husband Antonio, and Mario Sponzo the flirtatious lighthouse keeper. Vitale went on to play roles through the late '90s. Mario Sponzo's face graced the silver screen only this once. I offer a gallery.

Michael, thanks for the gallery of photos of the beautiful Marios. All three of the Rossellini/Bergman films you mention are truly great. I recently saw Voyage in Italy in its Italian-language version for the first time. Although it lacked the voices of Bergman and George Sanders in the version I'm familiar with, it was still a deeply moving experience.

Jim: Great to hear from you! Hope all is well with you and yours. Stromboil fits in neatly with films of white women in unfamiliar environments (Wide Sargasso Sea, I Walked With A Zombie, Casa De Lava). The print I saw of Europa, '51 was unusual in that it was subtitled in bright orange French subtitles (distracting!) and dubbed in English. For some reason, it was decided that all of the lower class Italians would be given Bronx accents. Listening to Giuletta Masina sound like Shelley Winters on benzedrine was a bit much, nearly painful to watch in fact. I would have preferred watching the film in Italian with English subtitles.