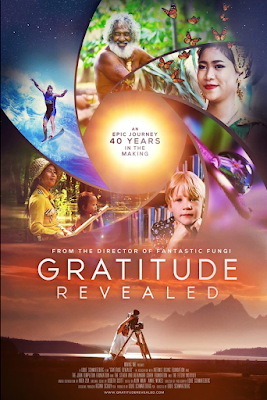 Described as a “cinematic quilt”, award-winning cinematographer, director and producer Louie Schwartzberg’s Gratitude Revealed (2022) stitches together finessed medallions of color, texture and rhythm into a resounding syncretic whole redolent with inspiration and sage guidance, often from the mouths of children and the bright expressive eyes of the elderly. Gratitude Revealed solicits repeated viewings to appreciate the depth of its complexity and the value of its cohesion.

I’ve seen Schwartzberg’s work in several films over the past few decades but it was his 2019 documentary Fantastic Fungi, a Netflix darling, that won me over completely. I have recommended Fantastic Fungi to dozens of people and am grateful that I can do the same for Gratitude Revealed with equal assurance.

For me gratitude is a spiritual discipline, much like Norman Lear’s definition of the two journeys each human being is offered: one is horizontal—what I would call the soul’s trajectory, the longbody of life from cradle to tomb—and the other is vertical, the conduit through which the soul’s trajectory is informed by spirit. The act, the grace, of inspiration.

For over 30 years Schwartzberg has been the patient master of timelapse cinematography and, again, I am grateful for his patience and his trust in what the world will offer and reveal to him. He literally allows his viewers to comprehend the beauty of the longbody in condensed form. A flower, ensorcelled by tropism, wiggles up from the earth, sprouts two leaves, then four, then more, then buds and bursts or bolts into bloom, which seduces the courtship of pollinators. One can use the metaphor of the flower to represent the whole of a human life and when one captures that growth in timelapse photography it provides the wondrous sense of the cycle of being. It’s truly wonderful to behold. Timelapse allows you not only to witness the passing of time but to feel it, to identify with it, to recognize and align oneself with it.

When Catholic Benedictine monk and scholar Brother David Steindl-Rast speaks to the beauty of clouds in the sky, Schwartzberg is able to ramp up the visual shapeshifting of clouds to address the power of breath, for after all isn’t that what clouds tells us? That the earth is breathing, as we are breathing upon it? When he shifts into slow motion when filming urban congestion and metropolitan patterns, it is also a way to measure breath, reminding us to slow breath down so that we can accept beauty in all its forms: both natural and urban. A scenic waterfall is, in essence, the same as the flow of people riding up and down an escalator.

To return to the analogy of the cinematic quilt and the art of stitching medallions together to create a composite image, I’m surprised that Schwartzberg hasn’t employed timelapse photography to capture, let’s say, the variant stitchings of a crazy quilt being assembled by a quilting bee. I’ve always loved that term—“quilting bee”—as it engenders the creative activity of communal effort by honoring the industry of the insect that gives it its name. Attributed to colonial America when people were dependent on communal work to accomplish certain tasks such as barn raising, harvesting, and the finishing of quilts, the analogy is a relevant and contemporary reference to the necessity of communal work if humankind is to advance and survive. Gratitude has as much to do with recognizing the value of communal activity as it is about the joy of accomplished tasks, of building community.

Schwartzberg achieves that communal recognition through a developed and articulate mode of interviewing technique, or rather through honest conversation and authentic communication. I have often said that my world is made up of conversations and Gratitude Revealed creates such a world cinematically. Schwartzberg has chosen his dozens of luminaries well. His approach has been much like mine in balancing the celebrity voices of the well-known with the articulations of the lesser known or fully unknown. He champions the cultural inflections of ethnicities, honors those finding their voices in recovery, and melds the wisdom of children near to source and the wisdom of elders returning to source.

So much is said in Gratitude Revealed that so much can be said about what is said, which (again) can more aptly be described as praise, if not prayer, if not song. All I can do is pick out a few of the stitchings that caught my eye in this cinematic quilt, or a few of the phrases that I hear most clearly in this communal conversation; but, I certainly encourage each viewer to appreciate their own. This is a film that makes you grateful to have eyes to see and ears to listen and I am certain each viewer will—as the film attests—appreciate what they feel in each moment and become grateful for what they remember of what has touched their hearts.

What touched my heart the most, I will admit, is the animated sequence wherein In-Q reads his poem “85”. As someone who has witnessed the deaths of many loved ones, who has been broken and restored by hospital bedside vigils, I am grateful that the love that conquers sorrow can be so eloquently expressed and so magnificently represented.

Norman Lear is such a great talking head in this community of teachers because he has had such a vibrant cultural impact through the redemptive hope of humor, which he admittedly developed to honor the uncles who raised him after he lost his parents. By seeking out what he could give back to them for helping him through grief, he recognized the gift of laughter, strengthened it, and ended up giving laughter to the world, irrevocably changing perspectives and effecting socio-cultural change. I also appreciated his deep respect for everyday interaction with the people who populate one’s daily life—from the barrista who serves you coffee, the server who brings you food, workmates, the cashier at the till who checks out your groceries, to strangers on the street practicing random acts of kindness. Myself, I always stop to talk to old dogs, to scratch their battered ears and look into the eyes that understand my own frosty snout.

Like my motivational favorite Brené Brown, sociologist and author Christine Carter impressed me with her attention to how important it is to have distinct meanings to specific words like “happiness”—distinguishing it from the pursuit of pleasure and gratification, which only leaves us wanting more, or the fallacious pursuit of busy-ness as a mark of character—and to understand that these words we have for emotions are physiologically based, which might allow us to physically practice the skill of experiencing emotions such as happiness.

Jason Silva’s riprap incant on craving the connective ecstasy of intersubjectivity is a seductive spoken poem and his definition of cinema as an “engine of empathy” encapsulates Schwartzberg’s purpose in creating films like Gratitude Revealed. His praise of the digital power of the internet as a “technologically mediated Buddhism” had me squirming around in my seat with joyful agreement.

And I must call out to the presence of Schwartzberg in his own film, recounting the tenacity of his parents to survive the holocaust, to be grateful to have children, whose resiliency inspired him to tell stories of survival, of optimism, of “participating joyfully”—as Joseph Campbell once penned—“in the sorrows of the world.”

Gratitude Revealed’s presence in theaters has been far too brief, but like Fantastic Fungi, I anticipate it will achieve its greatest impact through the technologically mediated Buddhism of streaming platforms. Catch it now, catch it then, catch it again and again.