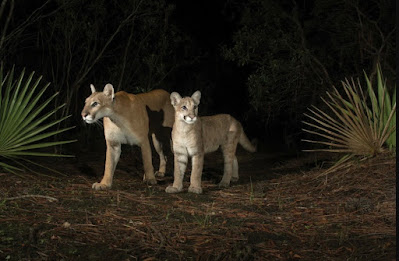 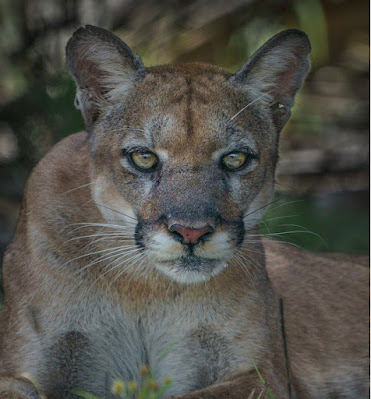 It's in the Big Cypress Basin that Ward’s lifelong dream of coming face to face with a wild panther materializes and, once again, the documentary thrillingly takes us into the heart of the moment, which he has anticipated for 20 years. His exhilaration at this once-in-a-lifetime opportunity transitions into heartbreak when he realizes that the only reason that the panther is moving slow enough for Ward to photograph her is because she is waiting for her kitten to catch up. The kitten, whose painfully faltering steps Ward records, has fallen victim to feline leukomyelopathy, a mysterious neurological disease afflicting panthers and bobcats.
The balance between setbacks and breakthroughs continues to define the plight and fate of the endangered Florida panther. It’s gratifying to see that the combined efforts of indigenous people, ranchers and conservationists have effectively blocked the proposal for the toll roads and strengthened political resolve to implement the Florida Wildlife Corridor Act.
In summation, Ward asserts: “The panther is showing us that it’s not too late. It’s showing us that these remnants of nature can still be reconnected. And if we do that, there’s no limit to the scale of life and balance that we can bring back across this entire continent. To see the way that this story can unify and bring people together, I have tremendous hope that what wildlife corridors can do to bring people together across the entirety of this country.”
Posted by Michael Guillen at 9/30/2022 10:18:00 AM