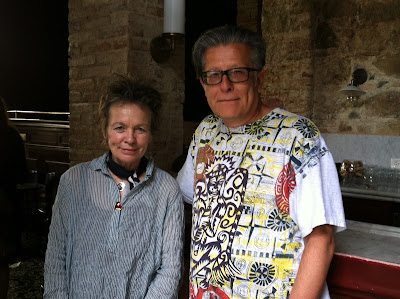 With evident Buddhist mirth registering in her twinkling eyes and her dimpled smile, Laurie Anderson gamely accepted the challenge of engaging a whirlwind series of 10-minute interviews, one after the other, when she attended the 2016 edition of the Panamá International Film Festival (IFF Panamá) to accompany the screening of her lauded essay documentary Heart Of A Dog. My thanks to colleague María Zacco for agreeing to combine our 10-minute allotments to have something near a decent conversation with Anderson, whose film is now available on HBO.

The Evening Class: Your film speaks to the limitations and possibilities of language. It's not the first time you've talked about these things but in this case, with Heart of the Dog, how did these themes lead you?

Laurie Anderson: When Arte asked me to do the film and asked what I cared about as an artist, I said I cared about words and how you can shape the world with words. So I thought I would try to do a film about stories, why we tell stories, and what happens to them. And also who's talking? Who's looking? For example, you see part of it from the dog's point of view and then cut to the next shot which is from a surveillance camera's point of view. You're always being asked to look through different eyes at stories. You have to decide, "Which is the view I look through?" There are so many!

The Evening Class: You also talk about manipulation. 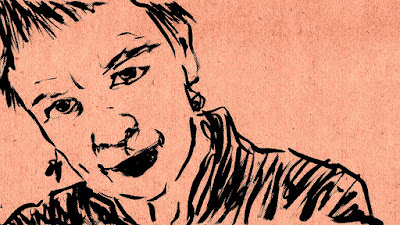 Anderson: Yes, because everything is manipulation. This interview is manipulation. You frame it as a question and then I have to have an answer. Maybe I don't have one? Maybe I've no answer? It's sometimes a game of ping-pong we should stop playing.

The Evening Class: One of the most beautiful aspects of Heart of A Dog is how it profiles the almost archetypal emotional connection between dogs and people. I'm not sure if you know this or not but some consider the very first "art" in the Americas to be an incised dog skull found in a cave in the Valley of Mexico, which says a lot about the creative devotion humans have to that animal connection.

Anderson: I aspire to learn from dogs, particularly their skills at being a puppy. They're so good at that, as if they would really like to see what makes people run. They watch. Okay, we're their food supply, but we're much more.

The Evening Class: I love that moment when your terrier is looking at you as if saying, "Is this going to be fun?"

Anderson: Dogs understand who has chi and who doesn't. They're infallible chi detectors. 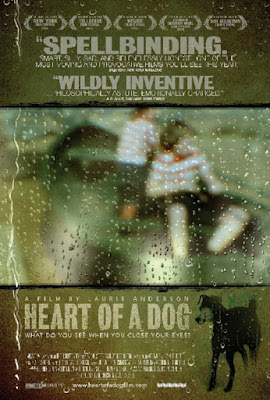 The Evening Class: You've woven multiple themes into your film, including the human abstraction of creating identity through persona making. Is persona the identity or is persona-making the identity?

Anderson: It's the persona-making. You can't create your identity particularly. You already are something. Creating persona is putting what you are into some framework of words or images. It's a big theme and really is one of the things the film is about. How do you express yourself? How do you identify yourself? In the current blogosphere, it's a kind of branding exercise and that's really alienating for most people to represent themselves as "out there" as one who does something. It's your avatar, in a way, that walks around. Sometimes people mistake this persona as their actual self, which is dangerous.

The Evening Class: Another heady subject in your film is death, which you treat so lighthandedly, as you do with memory. You're whimsical with both throughout the film and then suddenly the floor drops out and the viewer is plunged into grave depths, like these Panamanian pelicans out in the bay diving straight down for fish. I'm intrigued by this balance you've stuck between insouciance and the grounded recognition that death and memory compose the spine of our being.

Anderson: I use everyday language, and always have, to talk about things. I try to do that with subjects like death and memory as well. I look at the—in a way, everyday language of the Tibetan Book of the Dead—and tried to tell that story through sensation. The Tibetan Book of the Dead is a huge book and pretty complicated in terms of identity, persistence of self, abstraction, memory; but, I tried to make it work on a sensual level. What happens when things start breaking apart and looping and doing these things to your senses? Because this sense of disorientation is one of the things that the Tibetan Book of the Dead begins to describe. It takes you through the disintegration of your self. 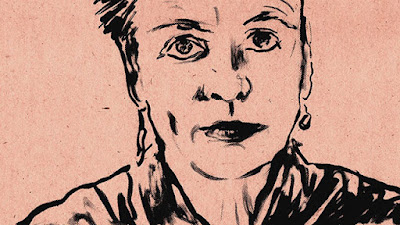 One of the things I try to say in the film is that, as a child, I felt kind of disintegrated already. As a five-year-old I looked up at the sky and thought, "That's where I came from. That's where I'm going. Period." I feel part of that. I never was too attracted to any other system that taught me something else, something that had to do with more solidity. I was always very sure that it was somehow part of some vibrational thing. So sky is a very big thing in this film, and so is up, which is to say the sky is a symbol of hopefulness but also of fear. Hawks dive bomb the dog so you see that can also come from the sky.

The Evening Class: And the sense of dispersal.

Anderson: Dispersal, yeah. And freedom. So it's freedom and fear at once. You're right about the duality of this. It's what F. Scott Fitzgerald was saying to writers: try to imagine that you have two opposing ideas and they're both equally true and one is in each hand. Try to hold them both without going crazy.

The Evening Class: Do you think we're alone when we're dying? 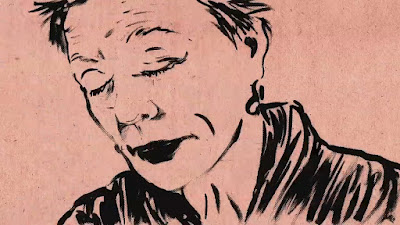 Anderson: Are we alone when we're living? No, I don't think so, no. In my own personal belief system, I think we're part of an energetic system that continues; that you can feel every moment. Like now. You can feel the connection between living things. Of course, we're encouraged to think of ourselves as alone and isolated single people, but we're really not. You can do many exercises that show you that that's not the case. Many people do really interesting work in terms of how things are very contagious: how fear is contagious, how love is contagious. In various situations, you feel an emotion of others and you become part of that system. I see it as energetic systems; but, of course, Western civilization encourages you to think that we're each a heroic, single person; the only imperfect one in the world.

The Evening Class: You talk about the existence of the bardo. Do you think we are living here and now in a bardo state?

Anderson: Yes, this is the bardo now and in fact, of course, we're not really "here." It's maybe a little too late to say that, but we're not. I don't think we understand very much at all, really; but, that's okay with me. I don't really need to know that much except that I try to accept that I don't know. But, still, I would like to try to find out. It doesn't make me depressed. It makes me think, "Well, I still would like to try." Even though I can see that it's completely hopeless.

The Evening Class: You've said in your film that you "try to feel sad without being sad." 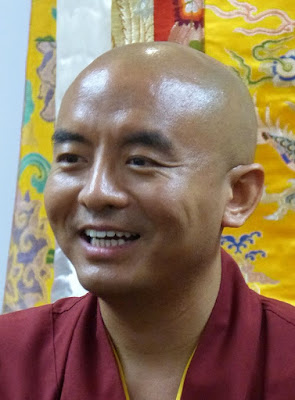 But I don't think that feeling and being are about that so much. It's more integrated than the artist and the internal editor. Mingyur Rinpoche is a Tibetan teacher and he's the happiest man in the world, according to the University of Wisconsin Neuroscience Department who give a series of tests through sound. They immerse people in sound and measure their ability to contain their composure. They play some horrendous sounds and it doesn't mean that you're hard-hearted if you don't begin to cry when you hear things like that; but, that you have a balance and a way to see the world.

Happiness is key. He's a teacher who says, "We're here to have a very very very very good time." That's what we're here for. We're not here to suffer. We're here to become open to all of this. That's quite difficult for a lot of people. There's a whole series of reasons: guilt and blame, and disbelief that we're in bliss. I'm a Buddhist and an artist because they're the same. All it is: you look for yourself. There's nobody in charge. Nobody's saying, "You have to think this or do this." Nobody's there. Which is intolerable for most people. They would love to have "Daddy" up there telling them what to do.

The teaching is that you're Buddha. You are. It gives you an incredible amount of responsibility, obviously, and power, and humility, all of those things, to try to understand things as well as you can for yourself. It's very much about trying to be aware in your own way. Find your own way. 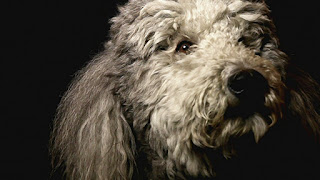 The Evening Class: Your film serves as a loving tribute to Lolabelle. What can you tell me about her?

Anderson: She was, like most dogs, able to live in a natural zone, which is guilt-free. When you watch dogs, they're not burdened with this. That's why it's good for people to look at them. You can learn so much from their sense of freedom. As I said earlier, we are their food supply and it might be a different world if they were our food supply. If they were feeding us, it would be a different world. Power shifts are important in this relationship; but, the important thing is that they are able to live in the present, which is a skill that most people do not have. They're too afraid. They're always planning or thinking about the past. There is such a thing as history and we learn from it and all of that, and there is such a thing as planning for something; but, the skill of being in the present is also something that I think would be very useful for more people to have as a skill.

So when a teacher like Mingyur Rinpoche says something like, "Try to feel without being"; it means exactly that. It's a big mistake to become sad because you see something sad. You do not have to become the thing you see.
Posted by Michael Guillen at 6/27/2016 07:58:00 AM